Nonprofit helps keep children in need from sleeping on the floor, pastor says 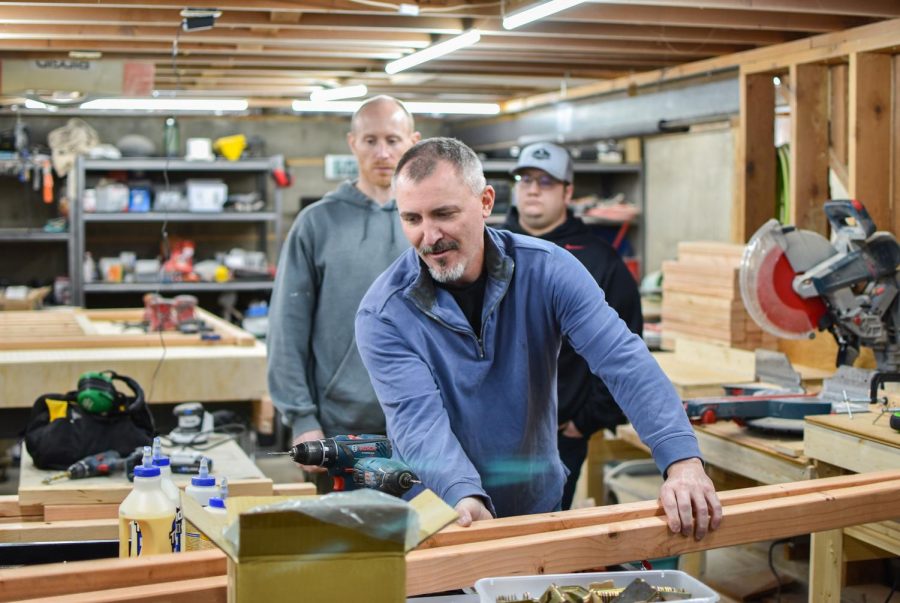 Senior pastor Thad DeBuhr shows volunteers how to build a bunk bed at 6 p.m. Monday in the basement of his Pullman home.

About a month ago Thad DeBuhr sent out a Facebook post,
offering to build beds for any families in need. Now, he’s made a nonprofit out
of it.

DeBuhr is a senior pastor at Real Life Church in Pullman,
who runs Blessing Beds in his free time. The idea came from DeBuhr’s background
in construction, having started the shed business Big Sky Mini Barns and
selling it a few years ago. DeBuhr said he wanted to use his background, skills
and faith to help his community.

DeBuhr said he sent out a Facebook post offering to build
beds for any families in need. He said he had over 100 requests after 24 hours.
By the end of the week, he had over 500. It was then that DeBuhr decided to go
bigger with his project.

All the money that goes into the nonprofit goes toward
building beds, DeBuhr said. Blessing Beds is all volunteer work. He said all
the time he runs Blessing Beds in-between his other work.

After, DeBuhr said he started a Facebook fundraiser and
not only exceeded his $3,750 goal, but also received messages from people
wanting to volunteer. From there he assembled a board and started open-building
nights for people to come in and help build beds.

DeBuhr said they make around 15 beds a week, but are only
able to deliver a couple of them, since they make the beds throughout the weeks
and do the delivery on Saturday. Blessing Beds also delivers mattresses and
bedding if needed, and DeBuhr said so far families have been honest about what
they need and don’t need.

He also said he’s not trying to focus on whether the
parents deserve the beds, if they’re not spending their money wisely, or
anything else that might take away from the problem.

“If there’s a kid that needs a bed, we just want to give
him a bed. We’re strictly on that mission.” DeBuhr said. “My concern is that if
there’s a kid on the floor and we can fix it, let’s fix it.”

Zach Reid, shop lead for Blessing Beds, knew DeBuhr from
Real Life Church and was one of the first volunteers for the nonprofit. Along
with helping build the beds, Reid trains volunteers during open-building nights
and helps DeBuhr with the deliveries.

Reid said it’s an “emotional rollercoaster” seeing the
happy families after the beds are delivered.

“In one room you’ll have the kid who’s so excited
to finally have a bed,” Reid said. “And in the other room you have the parents,
grateful but kinda humbled that they’re getting something from the community
with no charge, no questions, no requests back.”

In-house graphic designer Joey Nance found out about Blessing Beds after a friend tagged him in a Facebook post where DeBuhr was asking for graphic designers. Nance got in contact with him and said it didn’t take long until he was interested.

“I was sold, finding out how generous everybody was, how
loving they were, and how they were willing to get together as a family and
come together to help these kids.” Nance said.

He said people have been helpful with growing numbers
donating time and supplies to help build beds. He also said there’s a sense of
community you get with the organization.

“Helping these kids is important but there’s more to it,”
Nance said. “The fact that we’re actually joining together as a community in
this basement and using our hands.”

DeBuhr said he hopes to further expand his operations
around the Palouse, and his dream would be to have a Blessing Beds factory in
every city.

“It gives people in a community something to rally around,” DeBuhr said. “Every night … there’s a  whole bunch of people here. Some know each other, some don’t. By the end of the night, they’re all friends.”Blessing Beds is located at 529 NW Sunset Drive in Pullman. Their website is www.blessingbeds.webs.com and their open-building nights are from 6-9 p.m. on Monday and Wednesday and 9 a.m. to 9 p.m. on Fridays.