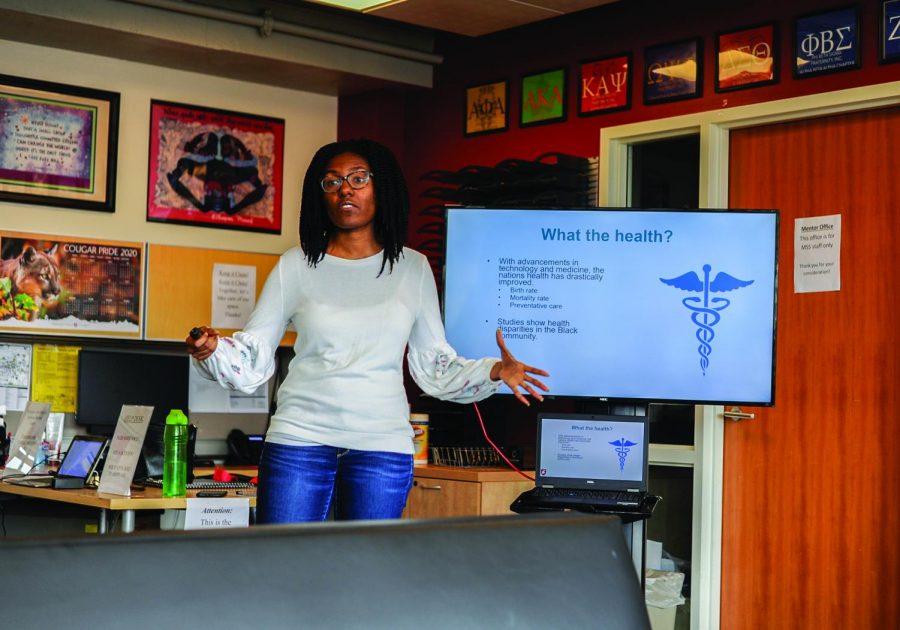 Brianne Posey, Multicultural Student Services Liaison facilitating a workshop highlighting the historical and present day issues faced throughout the black community when communicating with physicians on Wednesday in CUB 420.

Visiting a healthcare physician is like getting a new ride.

“When you test drive a car and you’re not really feeling it, do you say, ‘Well that’s it, I guess I’ll never drive again’? No, most people don’t do that. You’re like, ‘OK, let’s try another one,’” said Brianne Posey, health promotion and liaison for the Office of Multicultural Student Services at WSU.

Although there have been major technological advancements in health over time, Posey said there are still a lot of disparities in the black community.

Malik Dreher, fifth-year anthropology major, said disparities are apparent because black individuals do not trust health professionals. This is due to events that happened in the past. Dreher said some doctors think black people’s pain tolerance is higher than others.

“There’s been a lot of research out there that says that a lot of physicians are less likely to believe the pain threshold of people of color,” Posey said.

Lack of access to quality healthcare has been a historical issue for the African-American community, she said. Black people were not allowed to go to certain hospitals due to segregation.

“The disparities between those — the kind of care that you got in those facilities — was drastically different,” Posey said.

Black people were still not able to access quality care even after the Civil Rights era, she said, because hospital bills were not affordable.

Although the health field is beginning to become more diverse, it has been previously dominated by white physicians, Posey said.

“A lot of blacks believe that these individuals don’t necessarily have their best interests [and] are not really concerned with helping them preserve their health,” she said.

Posey referred to the Tuskegee syphilis experiment, which studied the effects of syphilis on black individuals. During the study, health professionals did not disclose their intentions and findings to the participants.

The U.S. Public Health Service (PHS) began the experiment in 1932, according to the History website. Although they discovered that penicillin was the cure for syphilis, PHS instructed physicians not to treat the participants in the experiment.

“They purposefully deprived these men of syphilis because they wanted to see what would happen if people had syphilis and they didn’t have access to medicine,” she said.

The study was only supposed to last for six months, Posey said, but ended up lasting for 40 years. A whistleblower eventually leaked what was happening in the experiment which caused funding to be pulled.

Medical advancements that occurred in this day and age helped with preventative care, Posey said. This targeted some ailments which disproportionately affect the black community. Some of the ailments include diabetes, blood pressure and asthma.

Communication barriers exist in both black patients and health professionals, she said. Sometimes, black communities have certain accents and vernacular depending on where they are from. This can make it hard for physicians to understand.

Some health professionals, on the other hand, may use medical jargon instead of using regular words to describe things, Posey said. Some might also lack cultural competence and come off as tone-deaf or racially-insensitive.

Having these barriers can lead to a misunderstanding, she said, and maybe even a misdiagnosis.

One of the ways communication can improve between patients and healthcare providers is to create a health history family tree, Posey said. The tree could help trace back any diseases or illnesses that may come up in the future.

Patients could also try to find a physician that best suits them by looking for someone who shares the same culture or religion, she said. Writing one’s symptoms or asking about billing before an appointment can also be helpful.

When people have bad experiences with physicians, they tend to throw the towel, which is something Posey suggests not to do.

“Test drive physicians until [you] find a good fit,” she said.