Cougars play first Power 5 school of the season in Arizona 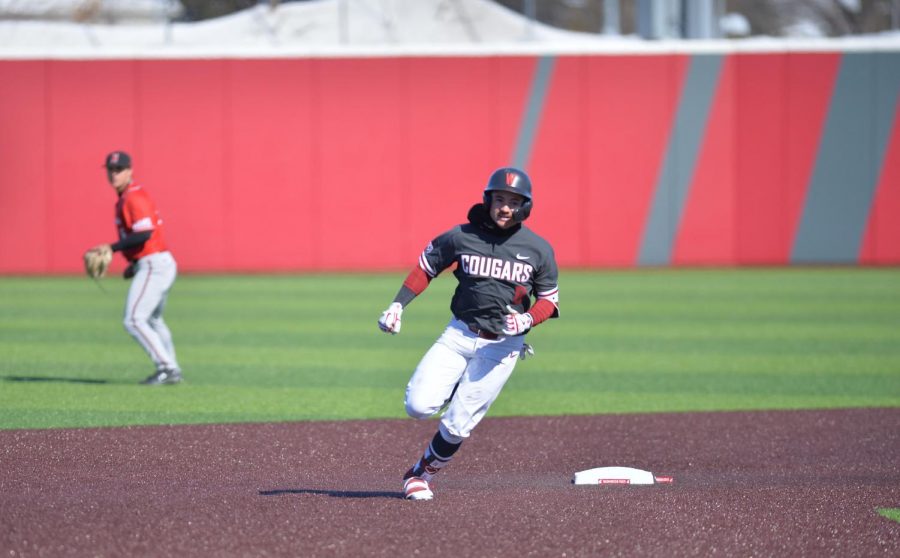 WSU’s baseball team will hit the road to play a three-game series against Rutgers University at a neutral site in Peoria, Arizona.

The three games will take place at 11:10 a.m. Friday, at 5:35 p.m. Saturday and at 9:30 a.m. Sunday. All the games will be hosted at the Peoria Sports Complex, which is the home of the Seattle Mariners and San Diego Padres for 2020 Spring Training.

The Cougars (3-5) will play their first Power 5 school of the year, as Rutgers (4-3) will travel from New Jersey to play at the neutral site.

Sophomore pitcher Zane Mills will start for the Cougars on Friday. Mills is 2-0 and has posted a 1.59 ERA in his two appearances for WSU this season.

“I’ve been doing a lot of focusing
and visualizing for my next outing,” Mills said. “I think if I can keep
throwing strikes that would play a big part in being successful.”

He has extreme confidence in his team and knows they always have his back, Mills said. Head coach Brian Green praised his right-handed pitcher, along with senior pitcher A.J. Block.

“Zane and AJ, they’re pounding the
zone,” Green said. “They’ve been awesome… they’ve been our guys.”

Sophomore infielder Kyle Manzardo
has led the Cougars offensively this season. Manzardo leads in almost every
offensive statistical category with a .379 average, .552 slugging percentage
and five runs scored. Green said Manzardo has been their best hitter and is
really happy for him.

“It means a lot to me,” Manzardo said
on Green’s praise of his offense. “I’ve worked really hard all offseason doing
what I need to do every day.”

Junior outfielder Collin Montez and junior infielder Jack Smith have also played a big part in the Cougars offensive success. Montez has the team’s only two homeruns this season, both coming in the same game in the first win against Hawaii.

Rutgers comes into the series with a three-game winning streak after sweeping the University of North Florida last weekend. The offense has exceeded expectations this season with six home runs and 61 runs scored in seven games.

“I don’t really think too much about
that,” Mills said. “My goal is to just throw strikes.”

Rutgers head coach Steve Owens and
Green are both coaching in their first year at their new schools and are both leading
a team in a Power 5 conference for the first time. Green said both him and Owen
are excited and eager for the new opportunities at bigger schools.

“Steve is a good coach,” Green said. “Rutgers is a great opponent, and we have two evenly matched teams.”

The Cougars’ series against Rutgers
will be the last of their road trip, as they will come home to play a four-game
series against Niagara University starting Thursday.

The first game of the series against
Rutgers will start at 11:10 a.m. today.