Riding a bike from Seattle to San Francisco taught Curtis Cohen how to have a step-by-step process, which is something he will take with him into his ASWSU presidential campaign.

“I wasn’t going to get to San Francisco in one day, but it was more of an accumulation of steps by steps,” Cohen said. “The end goal was the Golden Gate Bridge. For the campaign, it’s winning the election.”

Cohen was a member of the 48th ASWSU Senate last year. He said his motivation to run for president was so he could be in a position to have hands-on change. 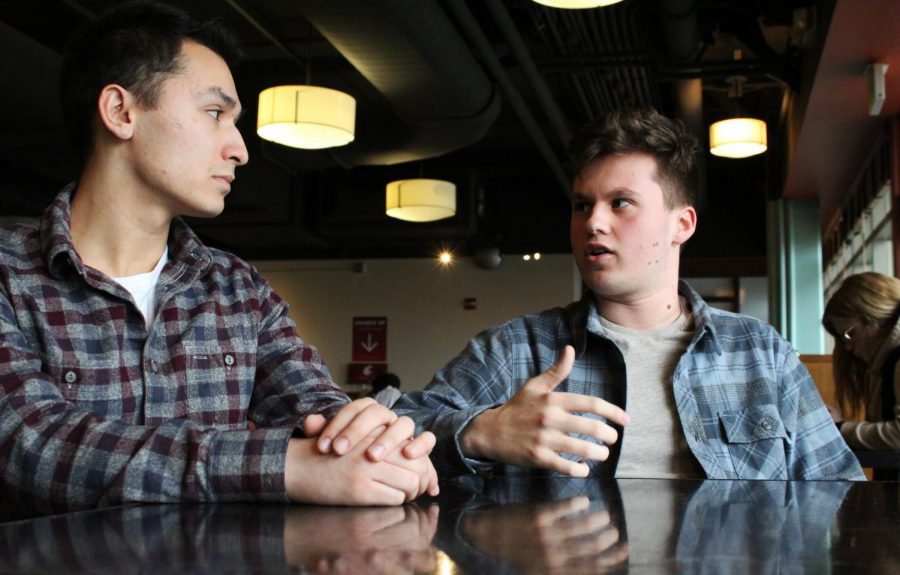 Running mates Curtis Cohen, President, and Sean Doster, Vice President, discuss how they want to improve the relationships between ASWSU Executives, Senators, and students at WSU on Tuesday afternoon in the Reunion. | CAROLYNN CLAREY

“For me, it was to be more of an advocate for students,” Cohen said.

Doster said running with Cohen gave him the opportunity to step into a leadership role on campus. Although he had participated in many leadership events in high school, he had yet to do so at WSU.

“I kind of decided that it was time to change,” he said. “It was time for me to step up and do something bigger than myself again.”

The two met through their fraternity, Phi Kappa Sigma. Doster said they did not become close until about a month and a half ago.

Cohen said Doster volunteered to run with him after he got the election packet and was searching for a running mate.

He said Doster handles the analytical side of the campaign while he works on building and maintaining relationships around WSU and Pullman.

Their experience living in a fraternity brings benefits to their campaign, Cohen said. Greek life contains a wide variety of students they can approach for insight.

However, that does not mean they will only turn to Greek Row to get a pulse of the student body, Cohen said.

“One thing we want to focus on is expanding beyond Greek life and looking into those groups that aren’t really represented as much,” he said. “[Such as] those smaller clubs on campus that might only have four people, but that doesn’t mean that they’re not important.”

Doster said they have both also had experience governing over their fraternity and making daily business decisions for a big organization. Cohen was the vice president of Phi Kappa Sigma last term and Doster is currently the treasurer.

They said their campaign will focus on improving the communication between ASWSU and the student body on campus. One of the challenges with their campaign is informing students an election is happening, Doster said.

“We’ve walked around and have asked people if they know what ASWSU is,” Cohen said. “It’s surprising how many people don’t know what their own student government is.”

He said this is not the fault of the students, but rather the fault of a lack of advertisement and social media presence within ASWSU.

Part of the reason that problem exists is due to executive department issues over the last year, Doster said. He cited recent staffing issues in the communications department of ASWSU.

“They resigned, but then they didn’t want to resign and then they came back,” Doster said. “The biggest thing for ASWSU is cleaning up all the internal things and putting together a good team of students from all around campus that Curtis and I don’t just happen to be friends with.”

With a good team, they would like to work with the university and city of Pullman to build projects that stand the test of time, Cohen said. To do that, they will need to create good working relationships with administration at WSU and the city to build upon their projects after their time in office.

“We’ll only be here for a year, but administration will be here for 10-20 years,” Cohen said. “When we graduate, we don’t want our projects to go away.”

Cohen said it took him until this year to find out there was an Indonesian organization at WSU. As someone who is half Indonesian, he said he wishes that was something he knew about in his freshman year.

“It’s great being in Pullman, but at the same time while this is home, I also want to get a sense of home from my own culture,” he said.

Cohen hopes he can help students avoid the type of experience he had by finding clubs and organizations they can identify with early on, he said.

“You matter, regardless of where you’re from,” Cohen said. “The diversity that each person brings here on campus is something that is ultimately a strength.”