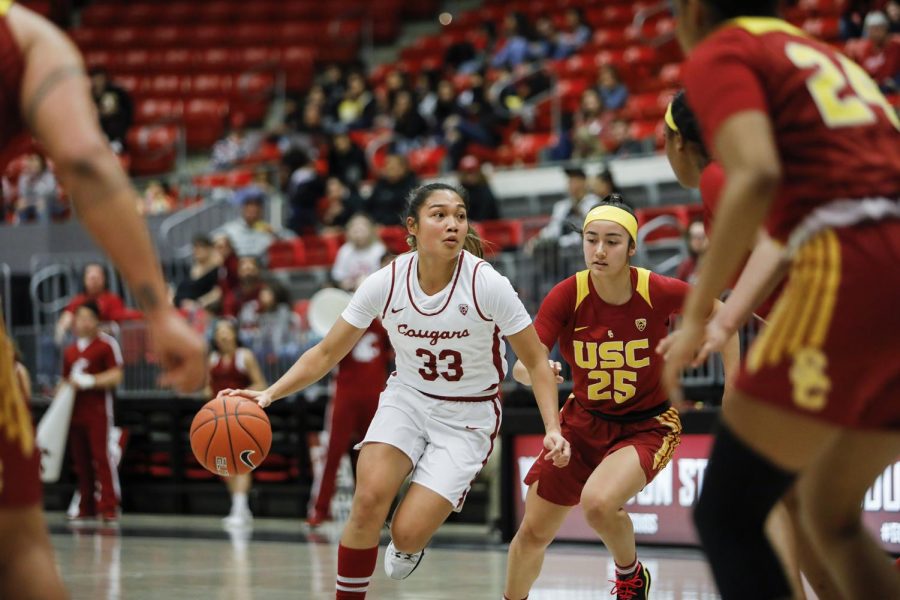 Sophomore guard Cherilyn Molina dribbles up the court against USC on Jan. 24 at Beasley Coliseum.

The WSU women’s basketball team lost to the No. 3 University of Oregon Ducks 88-57 Friday night at Matthew Knight Arena in Eugene, Oregon.

For the Ducks, senior forward Ruthy Hebard led the way. She totaled 28 points and grabbed 14 rebounds as well.

For the Cougars, redshirt junior forward Jovana Subasic was the main conductor on offense with 17 points on 8 of 11 shooting, seven rebounds and four assists. Redshirt senior forward Borislava Hristova finished with 14 points.

The Cougars never led in this game and the deficit reached 19 by the end of the first quarter. The Ducks finished the game shooting 55.2 percent from the field.

The Cougars shot 45.6 percent from the field. They also struggled from beyond the arc shooting 22.2 percent.

The work on the glass wasn’t pretty for WSU either as the team lost the rebound battle 37-23.

Sophomore forward Ula Motuga returned from injury to find her place in the starting lineup and scored eight points on three of six shooting.

The Cougars continue to find issues against the country’s top talent as they move to 0-13 against teams ranked in the AP top 25.

WSU travels north to Corvallis, Oregon, to face the No. 17 Oregon State University Beavers at noon Sunday for their last game before the Pac-12 Tournament. The Beavers (21-8, 9-8) defeated the University of Washington Huskies (13-15, 5-12) Friday night 75-61.

The game against OSU is at noon Sunday in Gill Coliseum. The game will be televised on the Pac-12 Networks.