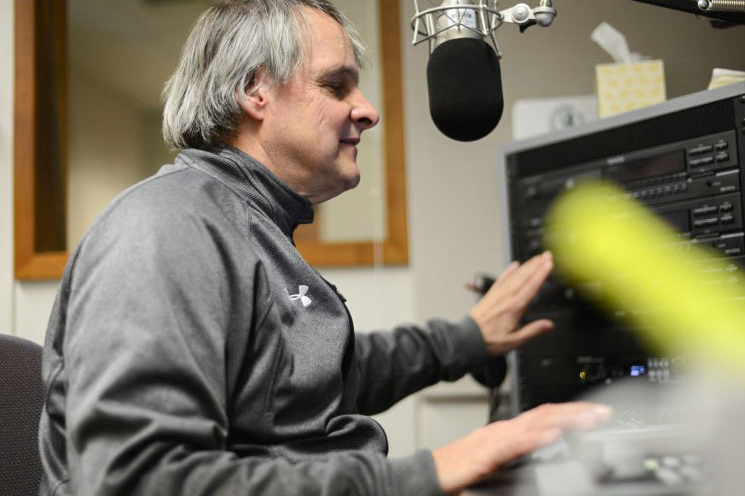 Newly obtained records show longtime radio host and folk musician Dan Maher engaged in an unprofessional relationship with a WSU student in 2018. This led to his early retirement and the sudden cancellation of his Inland Folk radio show last year.

Inland Folk was broadcast under Spokane Public Radio for 39 years and Northwest Public Broadcasting for 37 years. Maher, who is also the former WSU coordinator for student and organizational development, advised student organizations at WSU for 39 years.

Maher
performed at multiple events in the Pacific Northwest like the Spokane Fall
Folk Festival and Paradise Ridge Music Festival in Moscow. He retired from WSU
on June 28, 2019, which was two years earlier than he said he intended.

Maher is blind
and uses voice-to-text technology to send text messages, according to the
report from the Office of Equal Opportunity,
now called the Office of Civil Rights Compliance and Investigation. He
also uses Dial-A-Ride, a local transportation service, to travel around
Pullman.

Through text
messages and emails, as well as arrangements made between Maher and the
student, WSU investigators found that Maher was trying to change their
professional relationship into a romantic one.

“I made a huge
mistake,” Maher said in an interview with The Daily Evergreen. “The mistake was
and is that I scared someone.”

Maher sent the
student dozens of romantically-laced texts and “requests” for hugs, according
to the report. Maher also asked the student if she wanted to get dinner with
him.

The student,
who described herself as an international student, filed the complaint. She
told the investigators she saw Maher as a grandfatherly figure, which is also a
term she used to describe a member in her host family.

Investigators
reported that cultural differences influenced the way the student perceived
Maher’s behavior. The student said she felt Maher did not think she understood
what was going on and he took advantage of the situation, according to the
report.

The Daily
Evergreen reached out to the student multiple times through email but she did
not respond.

“I’m a nice guy,” Maher said to the Evergreen. “I would never have envisioned three years ago that I would have put a person in that position.”

Maher met
regularly with the student throughout spring 2018 to discuss tasks and
responsibilities relative to the organization she was in, according to the
report. He obtained the student’s personal cell phone number from a contact
list, which he used to communicate with her throughout the semester.

In early April
2018, Maher asked the student if she wanted to get dinner with him, according
to the report. The student said she did not perceive it as a romantic gesture at that time.

Before they
met for dinner, Maher told the student he did not want her to post anything on
social media because “professors and students should not be going out for
dinner,” according to the report.

Maher denied
making this statement, but the investigators did not find his denial credible,
according to the report.

On April 10,
Maher and the student had dinner together where they discussed their personal
interests, among other things that did not pertain to the student’s
organization. Maher paid for their dinner and they went to a coffee shop for
dessert. Then they got wine at a bar, according to the report.

Maher ordered
himself and the student a glass of wine, which she only had a few sips of
because she did not like its taste, according to the report. Maher finished his
wine and the student’s, which she found “weird.”

At the bar,
Maher reached out to hold the student’s hand, which he did not intend to be
sexual, according to the report. The student let Maher hold her hand “not
thinking anything [of it].” She asked him to stop soon after because it was not
commonplace in her culture.

The student
messaged Maher thanking him for the dinner, cake and wine, according to the
report. She texted him “It is wonderful that I get to know you … I love you,”
and he responded, “I love you too so very much and I am home safe.”

Maher sent
text messages to the student every day between April 11-20, according to the
report. The texts contained phrases such as “I love you” and “I miss you.” The
student also sent texts that involved the word “love,” but she told
investigators she meant it in a general manner to demonstrate her friendship
and respect for Maher.

Maher sent the
student around 16 messages regarding his feelings toward her from April 28-30,
according to the report. In some of his messages, he described how she brings
him “joy and happiness.” He also asked for her “time” and “hugs.”

Maher also
asked the student the exact time of her last final, which made her feel
uncomfortable. She said she found it “weird,” according to the report.

The student
received a text from Maher on May 6 that read “hunt [sic] me up when you’re
ready to see me.” She decided to ask her friends how to respond to the message.
This resulted in her clarifying her relationship with Maher as a respectful and
professional one, according to the report.

In the
conversation below, “REDACTED” refers to identifying information related to the
student’s and Maher’s work.

“The student: I think we should keep this professional. I really appreciate all your help and care. But I don’t feel comfortable with hanging out beside the [REDACTED] stuff.

Maher: I’m cool with that it probably was a bit premature for me to text the things that I did don’t worry as long as when we are doing the [REDACTED] stuff we can be cordial and friendly to each other.”

From records obtained by The Evergreen

Investigators
concluded that during the text exchange, Maher attempted to minimize his
previous behavior toward the student. In a text, he said, “… just remember
because someone says they love someone doesn’t mean they want them it means
they respect admire and enjoy them more than usual,” according to the report.

Throughout the
exchange, the student responded with short messages like “thank you.”

On May 7,
Maher sent an email to the student suggesting they meet to discuss plans for
the organization she was in. This made the student “very uncomfortable” because
she said she felt Maher was trying to see her “as soon as possible” and was
“trying to control her,” according to the report.

The student
met with an advisor on May 11 and shared her previous interactions with Maher,
according to the report. She said she
did not want to meet with him anymore.

Maher sent the
student a text message on May 14 congratulating her on her grades, according to
the report. The student said she did not feel comfortable responding.

Maher admitted
his actions were “inappropriate and inexcusable,” according to the report.

“I couldn’t
deny anything, and why should I?” Maher said to the Evergreen. “If you made a
mistake, you gotta just come clean.”

Investigators
noted that prior to this incident, university officials informed Maher of WSU’s
expectations. They reminded Maher of professionalism when interacting with
students due to similar allegations toward him in the past, according to the
report.

CRCI director
Holly Ashkannejhad said CRCI is responsible for investigating complaints and
gathering evidence. However CRCI does not determine the outcome for
respondents. Investigation findings are passed on to the respondent’s
supervisor.

She said
respondents can appeal the complaint if they think CRCI had an insufficient investigation,
if there was a substantial procedural irregularity, or if there was new
information pertaining to the case.

Maher said his
appeal for the complaint was rejected, and on Feb. 18, 2019, Ellen Taylor,
associate vice president for student engagement for WSU’s Division of Student
Affairs, told him he had two options. He could either retire or go through a
faculty review.

“I felt like
they were rubbing stuff off of their shoes,” he said to the Evergreen. “You
don’t feel like a human being when the university says it wants to get rid of
you.”

When the
Evergreen reached out to Taylor, she said she is “not in a position to speak
about personnel matters.”

WSU held a retirement party for Maher on June 27, he said, but no one except his bosses knew about the investigation. Maher said NWPB General Manager Marvin Marcelo called him on Aug. 12 to say he could not do anything for NWPB after Aug. 15.

“The radio job
was my soul,” Maher said to the Evergreen. “That was my enjoyment.”

A petition created in October to bring back Inland Folk collected about 1,200 signatures. The individual who initiated the petition said Bruce Pinkleton, dean of Edward R. Murrow College of Communication, told her “WSU has no plans to reappoint Mr. Maher.”

Maher said he
thought that he could still continue to host Inland Folk if he chose to retire
early and remove himself from student life, rather than going through with the
faculty review.

“I did a lot
of this so that I could keep the
show,” he said to the Evergreen. “If I just left quietly, I wouldn’t have the
two years that I wanted to finish out the job.”

Maher said he
recognizes NWPB’s right to remove his shows, however, they did it in a manner
that “raised more questions than were answerable.”

“Your audience
knows you after 37 years,” he said to
the Evergreen. “That’s what put me into a real tricky situation, which I
shouldn’t have been put in.”

Maher said he
thinks the investigation would not have ended differently if he denied the
complaint because the text messages are evident.

“Ultimately, I
scared her,” he said to the Evergreen. “I needed to and should have been held
accountable for that.”