OPINION: Write your own notes to learn more

While using a computer might be easier, you won't retain the information the same way as writing 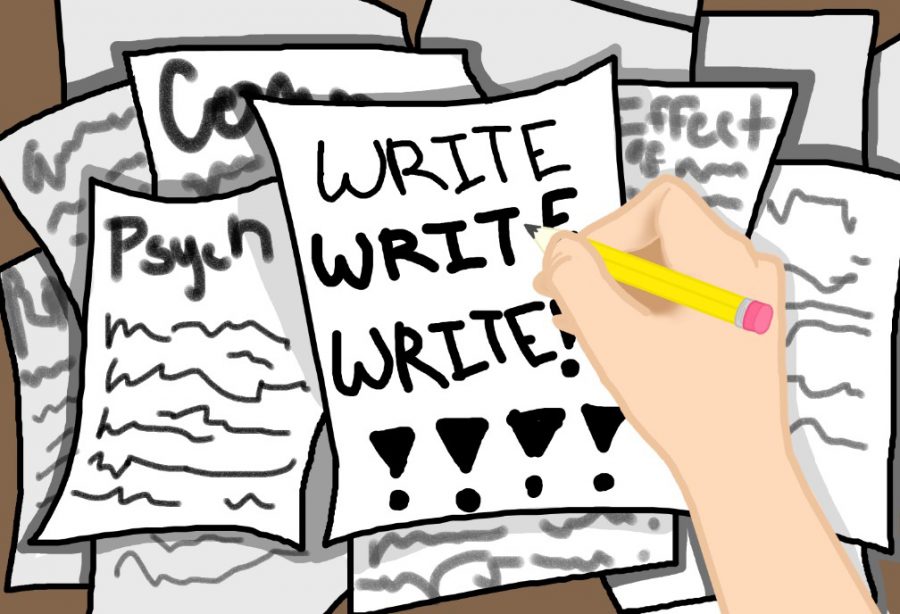 Many studies show writing notes is a far better method of studying than typing up notes. Therefore students should write their own notes unless they have other conditions. It will help everyone tremendously.

It may be easier to whip out a laptop and type notes but taking
the time to write is ultimately better.

Modern universities rely on technology more and more as years continue to pass. It is safe to say that it is impossible to succeed in college without having a laptop or computer of some kind. Professors assign homework, require digital copies of essays and even take attendance using computers. With the ever-changing technological world, it is not uncommon to just use a Word document over a composition notebook when taking notes.

According
to NPR, taking notes by hand requires students to be selective of
the information they write down, making them think more about the information
they are processing. Meanwhile, those who type notes tend to copy lectures
verbatim and don’t really think about the things they jot down. It was found
that those who took notes by hand ultimately did better on exams.

“Note-taking is beneficial to memory and learning,” Charles Weller, clinical assistant professor in the department of history, said.

Physically taking notes helps you remember what you are
discussing in class, instead of having the information go in one ear and out
the other. Writing it down goes into your long-term memory, when you type notes
it doesn’t.

Weller said handwriting is integral to an individual’s functionality and society, and by promoting handwritten notes in his classes he is preparing his students for the future. Computers are a powerful tool, and as students we must understand that their power isn’t always a positive.

“I get distracted by my computer. I would online shop, go on Facebook and play Coolmath Games,” said Gabriela Motta, freshman communication major. She isn’t the only one tempted by the unlimited use of the internet right at our fingertips.

There are certain exceptions to this that we must be aware of. The Access Center gives out accommodations for students to type notes in classes where professors usually require handwritten notes. Despite this, students with these accommodations should at least copy down important points in a notebook after class. This assures that the important pieces of lectures are sticking in the long-term memory portion of your brain.

This does not mean that a laptop is not to be used in the
classroom at all. Many core classes depend on programs such as Aleks, Top Hat
and Learning Catalytics to record daily points and overall class progress. Just
be aware of the implications that verbatim notes are going to have on one’s
grade.

If giving up digital notes is not an option, possibly put a lock on certain applications during class times. Those distractions may be fun now, but come finals time, the level 43 character in “Wizard101” isn’t going to help you get that A.