We own the Apples 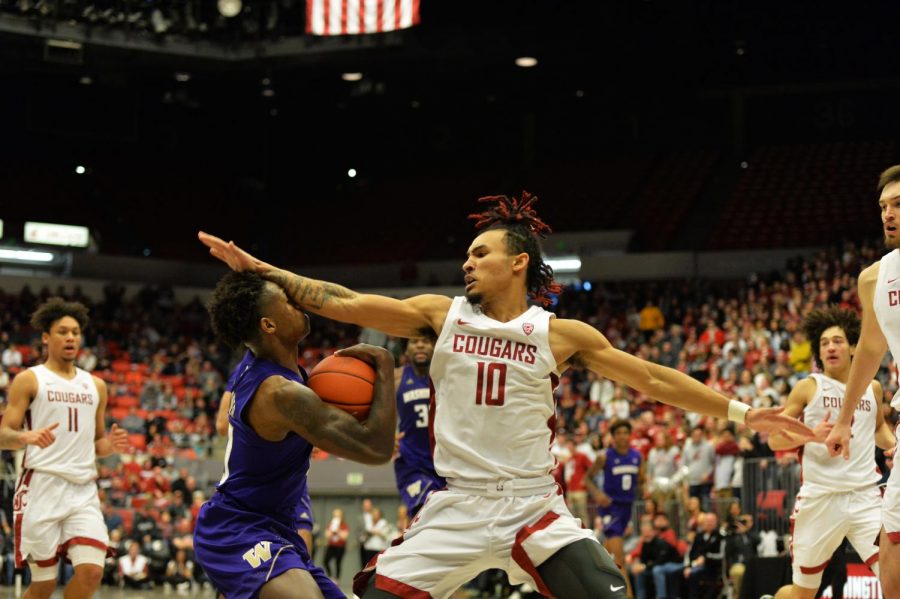 WSU men’s basketball achieved its first road win in conference play by defeating the University of Washington Huskies 78-74 in the HEC Edmundson Pavilion in Seattle.

Sophomore forward CJ Elleby led the Cougars (15-14, 6-10) in scoring for the 18th time this season with 21 points on eight of 13 shooting. He made three 3-pointers and grabbed nine rebounds.

Elleby was also a havoc on defense with two blocks and four steals; this is his fourth game of the season with at least four steals.

After missing the past three games with a hip injury, junior guard Isaac Bonton returned to the starting lineup and contributed 20 points. He scored 18 of his points in the second half, and he shot eight of nine from the free throw line.

UW (13-16, 3-13) freshman forward Jaden McDaniels made the
starting lineup against WSU after playing the past six games off the bench.
McDaniels led the Huskies in scoring for the sixth time this season with 19
points while committing six turnovers, a new career high.

Senior forward Jeff Pollard scored the first basket for WSU
a little over a minute into the game off a putback layup underneath the hoop.

UW held a lead over WSU for about the first three minutes of
the game. A fadeaway jump shot from Elleby with over 16 minutes left in the
half gave WSU its first lead of the game and brought the score to 9-8. UW
regained the lead seconds later.

Freshman forward Isaiah Stewart picked up two fouls in the span of 14 seconds within the 10-minute mark. UW played Stewart for about four more minutes in the half. He went into halftime with four points with half of his points coming from the free throw line.

Elleby scored his 1,000th point on a deep 3-pointer with 2:42 left in the half. It took Elleby 61 games to achieve this feat, the third fastest in program history.

This Elleby 3-pointer ignited a 10-0 WSU run to finish the final two minutes of the first half.

WSU led UW 41-28 at halftime with freshman guard Noah Williams
and Elleby leading the Cougars and combining for 23 points. WSU’s 41 points at
the half is the most in a first half since facing the Oregon State Beavers in January.

WSU more than doubled UW’s points in the paint at halftime
with 24 points.

WSU’s double-digit lead was quickly erased as the Huskies went on an 8-3 run in the first four minutes of the second half. The three points from WSU were the Cougars’ only points for over seven minutes into the half.

A fadeaway jumper from McDaniels when facing one-on-one against Williams brought WSU’s lead down to one, and the score was 44-43. UW took a 47-45 lead less than two minutes later

Pollard scored WSU’s first field goal in almost six minutes and
tied the game at 47 with 11:24 left on the clock.

The UW technical allowed WSU to score back-to-back free
throws and a 3-pointer in the same possession. WSU’s offensive struggles took a
complete flip after this 5-point possession.

Stewart backed down Pollard in the post with under nine
minutes left on the clock and picked up a charging foul when battling towards
the basket. Stewart went up with his shooting motion while the foul was being
called and landed on Pollard’s leg on his way down.

Pollard was substituted out of the game and was accompanied
by the WSU trainer. However, he walked on his own with no limp in his step. He
returned to play less than a minute later.

Bonton started to heat up with 8:47 left on the clock as he drilled a stepback 3-pointer. Bonton’s heat check 3-pointer in transition gave the Cougars a 61-51 lead, 28 seconds later. WSU had a double-digit lead for the first time since the beginning minute of the second half.

A layup from UW junior forward Nahziah Carter with 24
seconds left brought WSU’s lead down to one and the score was 75-74. Bonton
went to the line for the fifth time of the game and made the first shot but
missed the second. UW rebounded the missed shot and had a chance to tie.

Carter attempted a game-tying layup with 10 seconds left and
hit the front of the rim. Williams grabbed the rebound and was fouled seconds
later. Williams walked up the court with the ball in his hand ready to take the
game-clinching free throws.

Williams made both free throws to ice the game for the Cougars.
On the same day as Williams’ 19th birthday, WSU defeated UW 78-74 for the
Cougars’ first road win in conference play. The Seattle native Williams yelled
at the UW crowd “This is my city” as the buzzer sounded.

WSU remains undefeated at 15-0 this season when winning with
five minutes remaining. WSU assured UW’s last place finish in the Pac-12
standings with this victory.

WSU will face the University of Arizona Wildcats at 7:30 p.m.
on Thursday in the McKale Memorial Center in Tucson, Arizona. The game will air
on FS1.