Tennis wins one, drops one in San Diego

Michaela Bayerlova gets her 11th win of season 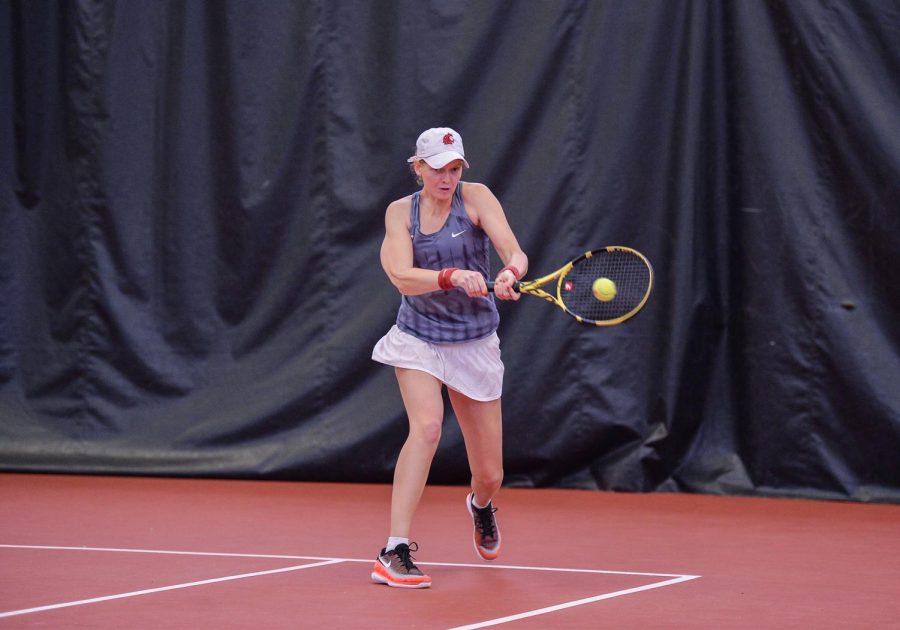 Junior Michaela Bayerlova hits the ball against Gonzaga on Feb. 8 at Hollingberry Fieldhouse.

University of San Diego (6-4) continues its amazing run by winning a fifth match in a row and knocking off a ranked team in two consecutive matches, as they took down then-No. 22 University of Southern California on Feb. 22.

WSU got one of its match wins in singles play from No. 63
junior Michaela Bayerlova over No. 59 sophomore Solymar Colling. Bayerlova’s
victory over Colling will improve her record and will increase her chances of
moving up in singles play rankings.

Joining Bayerlova in singles play victories was Jittakoat
and Lee, as they defeated their USD opponents in straight sets by scores of
6-1, 7-5 and 6-0, 6-4.

The Cougars captured the victory over UC Santa Barbara after
falling to No. 32 San Dieg.

WSU started off with a smooth victory in doubles play as Bayerlova
and Sato won by a score of 6-2, and Knezevic and Jittakoat won by the same
score.

Bayerlova won another singles match on Saturday; this time against senior Amit Lev Ari. The victory marked her 11th win of the season and will continue her reputation as one of the best singles players in the country.

Following Bayerlova in singles victories was Sato, Jittakoat
and Ates. Sophomore Savanna Ly-Nguyen and sophomore Yang Lee were defeated in
their during singles play matches.

The Cougars get right back on track with their victory over
Santa Barbara, as they will now head home to start conference play against
University of Colorado, Boulder on Friday and University of Utah on Sunday.