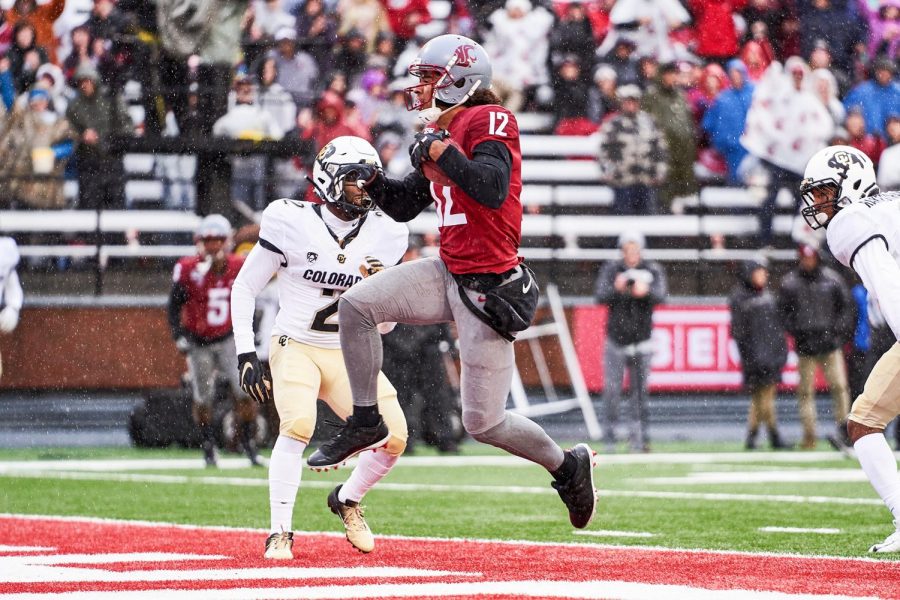 WSU was well represented over the weekend at the NFL
combine at Lucas Oil Stadium in Indianapolis, Indiana.

Both Cougars performed well for their position groups
drawing praise from the commentators on the NFL Network and draft experts on
Twitter.

Gordon chose not to participate in any of the drills,
opting to only be a part of the throwing portion of the workout. He did not
disappoint in his showing, proving to scouts in attendance that his ability to
sling the rock is legit.

“Anthony Gordon threw very well last night [in my
opinion]. Nobody was perfect but he was consistently accurate,” said Sage
Rosenfels, football writer for The Athletic Minnesota, via a tweet.

Gordon’s accuracy wowed anyone who watched him throw
in Indianapolis. His precision passing was evident during his time at WSU; he
finished the 2019 season with a 71.6 completion percentage.

Patmon was one of Gordon’s top targets last year and
also had a spectacular showing at the combine. He finished in the top 20 for
wide receivers in each of the six workouts.

His best performance came in the broad jump where he
recorded an 11-foot jump. That gave him the third best mark for a wideout and
the 11th best jump for any position.

One of Patmon’s most surprising performances came in
the 40-yard dash. He tied for the 18th best time in his position group with
4.48 seconds.

Patmon ran the 40 faster than any other WSU wide
receiver over the past 10 years, besting Marquess Wilson’s time of 4.51 seconds
in 2013. Patmon ran his time at an inch taller and over 30 pounds heavier than
Wilson.

He also had good showings in the other drills. He ran
the 3-cone drill in 7.28 seconds and the 20-yard shuttle in 4.38 seconds. Those
times were 12th and tied for 18th, respectively, out of all wide receivers.

Patmon demonstrated his strength by putting up 15 reps
of 225 pounds in the bench press, tied for 15th in his position group. He
showed off his hops as well with a 36-inch vertical jump, tied for 20th best
out of receivers.

Patmon, like teammate Gordon, stood out during the
on-field portion of the combine. He showed off his route running ability and
catch radius in a number of different drills.

He was even able to catch the eye of ESPN football
analyst Louis Riddick.

“WR Dezmon Patmon of @WSUCougarFB not getting enough
shine. I’ll take care of that now. HE IS A BALLER. Big, fast, strong, great
hands, great workout tonight. The best is yet to come!!” Riddick said via a
tweet.