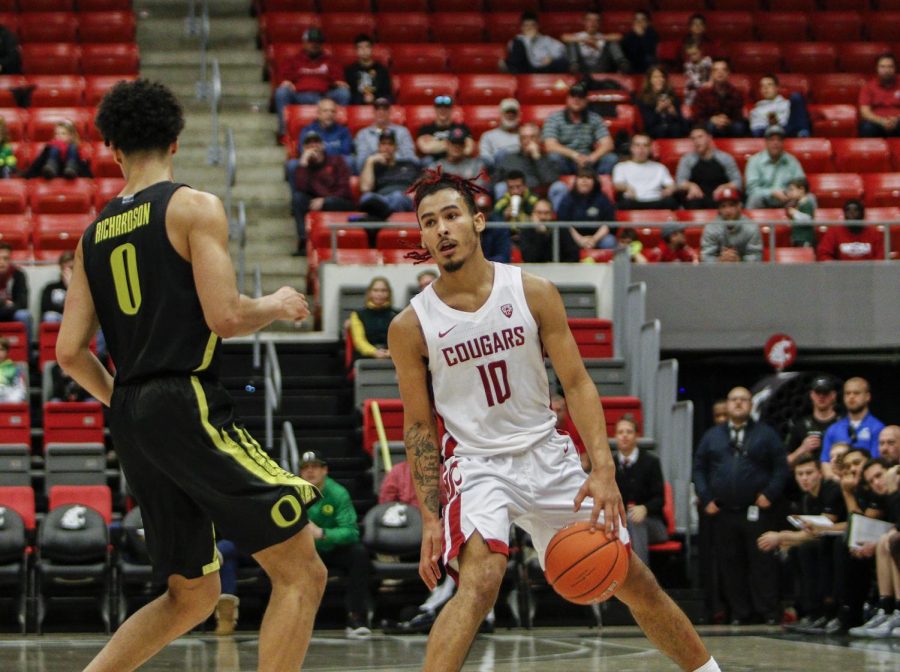 Junior guard Isaac Bonton dribbles down the court against the University of Oregon Ducks on Jan. 16 at Beasley Coliseum. The WSU Cougars won the game 72-61.

The Bruins have officially taken over as the hottest team in the Pac-12 by extending their winning streak to seven games. They started out their weekend by beating the previous hottest team in the conference: Arizona State. UCLA beat the Sun Devils in a back-and-forth affair in which no team led by more than 10 points. The Bruins’ top scorer was freshman guard Jake Kyman with 21 points off the bench. Two other players tied for leading starter scorer with 13 points: freshman guard Jaime Jaquez Jr. and redshirt sophomore forward Jalen Hill. Three of Jaquez’s points came in the biggest moment, he hit a buzzer-beater 3-pointer to give the Bruins the 75-72 win. UCLA played another close game in their second game of the weekend; they beat Arizona in a 69-64 game. Junior guard Chris Smith led the Bruins in scoring with 17 points; he was the only starter to hit double-digits against the Wildcats. The other four starters combined for 13 points, including two of them contributing zero points.

The Ducks only had one game last week, but they did what they had done 21 times before: won. They beat their in-state rival, Oregon State, by 15 points in an uncompetitive game. The Ducks led for the entire second half and got their lead up to as much as 23 points. In a gigantic shock that nobody would have ever seen coming, Oregon was led by senior guard Payton Pritchard. The Pac-12’s leading scorer had 23 points, three assists and two steals, all team-bests. Pritchard was helped out by senior guard Anthony Mathis and sophomore guard Will Richardson. They chipped in a combined 28 points, 15 for Richardson and 13 for Mathis.

After suffering a sweep last week, the Trojans were on the right side of a sweep this weekend. Senior guard Jonah Matthews led the way for the Trojans. He started off with a team-high 14 points in a win against Arizona. Freshman forward Onyeka Okongwu was the only other USC player to reach double-digits in a low-scoring affair. The Trojans only managed 57 points on 42.6 percent shooting but held the Wildcats to 48 points on 28.1 percent shooting. USC’s offense was more prominent in their 71-61 win against Arizona State. They were once again led by Matthews who poured in 23 points, his best offensive output of the season. Three other players scored in double-digits, including Okongwu with 10 points. The other two were senior guard Daniel Utomi with 19 points and senior forward Nick Rakocevic with 13 points.

The Sun Devils’ seven-game win streak finally came to an end over the weekend at the hands of UCLA and USC. Arizona State still remains near the top of the conference standings despite the losses due to their impressive run, winning nine of their last 10 games before falling to the Bruins. They stayed competitive throughout the losses, keeping the final score of both games within 10 points. The closer contest of the two games came against UCLA, where the Sun Devils lost on a 3-pointer as time expired. Even though he was on the losing side, junior guard Remy Martin had the best game on either side. He finished with a game-high 30 points and led his team in steals with four. Senior guard Rob Edwards helped Martin out by chipping in 23 points, 21 of which came from 3-pointers. The other seven players that got on the court for Arizona State managed to combine for 19 points. In their loss to the Trojans, Martin and Edwards were the only players to hit double-digits. Martin led the team again with 22 points and Edwards scored 10 points.

The owner of the second-longest active win streak in the Pac-12, the Cardinal got up to four wins with their second consecutive weekend sweep. Stanford was impressively consistent; it beat both Utah and Colorado by eight points, scoring 70 and 72 points respectively. The Cardinal were led by two players in its first win of the weekend over Utah. Freshman guard Tyrell Terry was the leading scorer with 27 points, the most of his collegiate career. Junior forward Oscar da Silva also contributed 20 points and was the leading rebounder with seven boards. Stanford’s scoring attack was much more evenly distributed in its win against Colorado. Four Cardinal starters scored between 12 and 19 points, accounting for 59 of the team’s 72 points. Da Silva and Terry were among that group, scoring 16 and 12 points respectively. The other two players were sophomore guard Bryce Wills, who led the team with 19 points, and junior guard Daejon Davis with 12 points.

The Buffaloes are on their worst losing streak of the season after dropping their second and third consecutive games. They began their week with a loss to California. The Buffaloes were not able to keep the 14-point game very close; the most they ever led by was two points and the Golden Bears led for the final 28 minutes of the game. Junior guard McKinley Wright IV was the bright spot for Colorado; he scored a team-high 18 points. He also led or was tied for the lead in rebounds, assists and steals. The scoring was better for the Buffaloes against Stanford but was still not enough as they fell in a 72-64 game. Three starters for Colorado scored over 13 points, led by junior guard Tyler Bey with 17 points. Junior guard D’Shawn Schwartz was second on the team with 14 while Wright had 13 points and 11 rebounds for his sixth double-double of the year.

This was not a great week for the Wildcats. They started with a loss to USC where they only managed to score 48 points. Despite their offensive struggles, Arizona was able to keep the game close, never letting the Trojans lead by more than nine points. Freshman forward Zeke Nnaji had 15 of those points along with 10 rebounds to finish with a double-double. Freshman guard Nico Mannion also contributed 11 points and no other Wildcat scored more than six points. Nnaji and Mannion were again the top performers for Arizona in their second game, a loss to UCLA. Mannion led the team in scoring this time with 19 points and Nnaji had 16 points.

The Golden Bears got their second weekend sweep in conference play by beating Colorado and Utah. California was once again led by sophomore guard Matt Bradley; he has been the Golden Bears’ leading scorer in 13 of their 16 conference games. He had 26 points in their 14-point win over then-ranked Colorado. The Golden Bears only trailed once in that game, a two-point deficit for 35 seconds in the first half. Senior guard Kareem South also played well for California, his second-best game this year in terms of scoring. Bradley had 21 points in their overtime win against Utah. The sophomore came off the bench in that game because the starting lineup featured four seniors for their last home game. Senior guard Paris Austin had 15 points in his final home game and junior forward Grant Anticevich chipped in 17 points.

The Cougars left the west side with all the apples after beating Washington in the second game in the Apple Cup series on Friday. They ended their four-game losing skid in dramatic fashion with a four-point win over the Huskies. WSU had their best performance from deep in quite some time as they shot 36.8 percent on 3-pointers after struggling from behind the arc for weeks. Sophomore forward CJ Elleby led the way for the Cougars with 21 points, including three 3-pointers. Junior guard Isaac Bonton had 20 points in his first game back from injury in two weeks. Freshman guard Noah Williams was the only other Cougar in double-digits. He had 15 points on the same day he turned 19 years old. Two of his points came in the final seconds as he sunk two free throws to ice the game for WSU.

A week after snapping their three-game losing streak, the Utes began another one with two losses over the weekend. Their first loss came against Stanford in a game that was not as close as the final score demonstrates. The Utes lost by eight points in a 70-62 game, but they never held a lead and were consistently down by close to 10 points. Sophomore forward Timmy Allen had 17 points for Utah, making him their leading scorer. Sophomore guard Both Gach finished behind Allen with 15 points. Utah’s next game was closer, taking California into overtime where they ultimately lost. Allen led the way once again with 26 points while Gach and junior guard Alfonso Plummer had 19 and 23 points, respectively, off the bench.

The Beavers only had one game over the weekend, meaning they could only increase their losing streak to four games, which they did. They lost to their in-state rivals, Oregon, for the second time this season, splitting the series. The Beaver starters scored 50 of their 54 points. Junior guard Ethan Thompson scored the most points for Oregon State, recording 15 points to go along with his game-high six assists. Senior forward Tres Tinkle had a double-double with 14 points and 10 rebounds. Junior guard Zach Reichle and senior forward Kylor Kelly were the other double-digit scorers; Reichle had 11 points and Kelly had 10 points.

The Huskies almost won a basketball game over the weekend but then they remembered they are the Huskies. They suck, so they did what they are used to and lost.