‘It’s nothing but love for Jervae’ 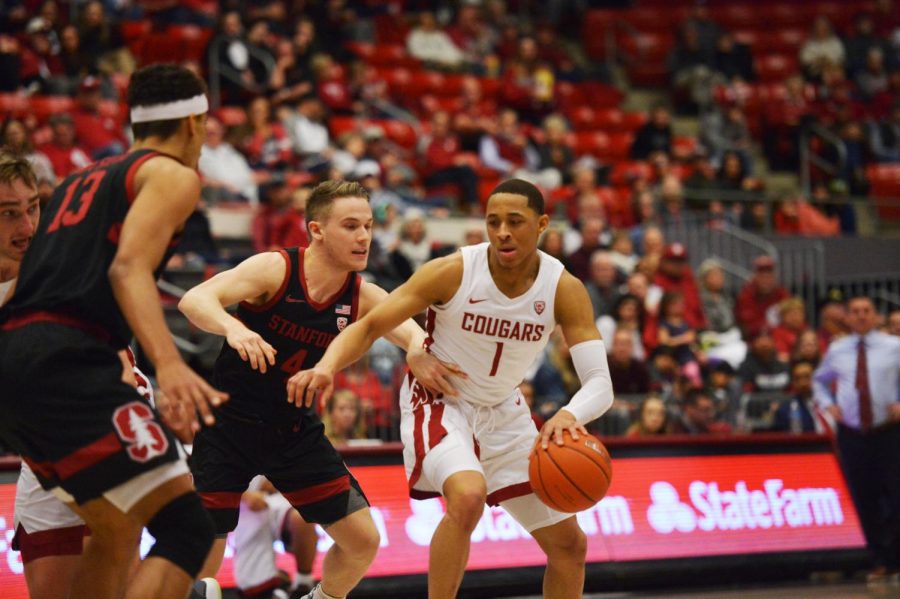 Senior Guard Jervae Robinson attempts to get past Stanford defenders on Feb. 23 at Beasley Coliseum.

Senior guard Jervae Robinson
finishes his collegiate basketball career with WSU this season as one of five
returning Cougars from last year.

Robinson helped Otero to consecutive
20-win seasons through his tenure and made brief trips to post-season NJCAA
tournaments.

After his sophomore season came to
an end, the Colorado native said he transferred to WSU because he wanted to play
basketball in the Pac-12.

“When I came up on my visit here, it
just felt like somewhere where I could be comfortable,” Robinson said. “The
staff that was here – they just made me feel like I was just in good hands.”

Aside from winning more games this
season, Robinson said he would not have wanted his senior year to end any other
way.

As Robinson reflects on his time at
WSU, he said he is forever thankful for WSU taking a chance and bringing him up
from junior college to play in the Pac-12.

In his first season at WSU, he
played every game of the season and made the starting lineup seven times. This
year however, Robinson started in all but five games while making improvements
in several statistical categories.

Head coach Kyle Smith has consistently
credited Robinson as being the number one option to defend the Cougars’
opponent’s best offensive player.

Robinson’s teammate, junior forward
Marvin Cannon, is a former junior college transfer himself. Cannon said he saw
Robinson as somewhat of a motivating figure to look up to with Robinson’s
hard-working ethics.

“It’s nothing but love for Jervae — I’m happy for him,” Cannon said.
“He worked his tail off and he just gives a great inspiration for everybody.”

Robinson helped the Cougars this
season reach 14 wins thus far, the most wins from WSU since the 2012-13 season.

Smith said Robinson helped him
immensely with transferring from the WCC up to the Pac-12 this season as a
first-year head coach. Robinson never questioned or had second thoughts on
Smith’s knowledge of the game.

“That helped me out a lot with the
transition,” Smith said. “[Robinson] has been great.”

Robinson is a reserved player on and off the court according to his teammates and coaches.

“I just wish the best for your future. You’re just going to be successful in life whether that’s with basketball or whatever you decide to do.”

Defeating Oregon State with a sold-out Beasley crowd and
sweeping the Arizona schools last season stand out as some of Robinson’s
favorite moments from his WSU career.

“I don’t know if I’ll ever be able to see something like
that again,” Robinson said about the Oregon State game. “That was special.”

The future of the WSU men’s basketball program will be in
the right hands of Smith and his staff, Robinson said.

“I’ve definitely seen the change that coach Smith has
brought to the program,” Robinson said. “I think it’s only going to improve
from here.”

Robinson said his playing days are not entirely over yet as he has received offers to play for teams post-WSU. However, he plans to pursue a career in sports psychology or coaching in the future.

In Robinson’s last home game as a Cougar, he scored a career
high 14 points while adding six rebounds and five assists.

When he was substituted out of that game with seconds
remaining on the clock, him and senior forward Jeff Pollard visited the center
of the court and kissed the WSU logo farewell.

Robinson can always find his way back “home” and reach out
Smith for anything, Smith said. He hopes that Robinson can be someone that says
they helped ascend Cougar basketball to be a future powerhouse.

“Jervae is absolutely consistent,” Smith said. “I think that
his consistency has really helped us have the success we’ve had.

Cannon said he will miss Robinson dearly, and he will talk
to him every day once he’s gone.

“I just wish the best for your future,” Cannon said. “You’re
just going to be successful in life whether that’s with basketball or whatever
you decide to do.”