Judicial Board will be issuing Martian a letter of reprimand; recommends that the senate should draft a resolution which includes mandatory training on conflict resolution 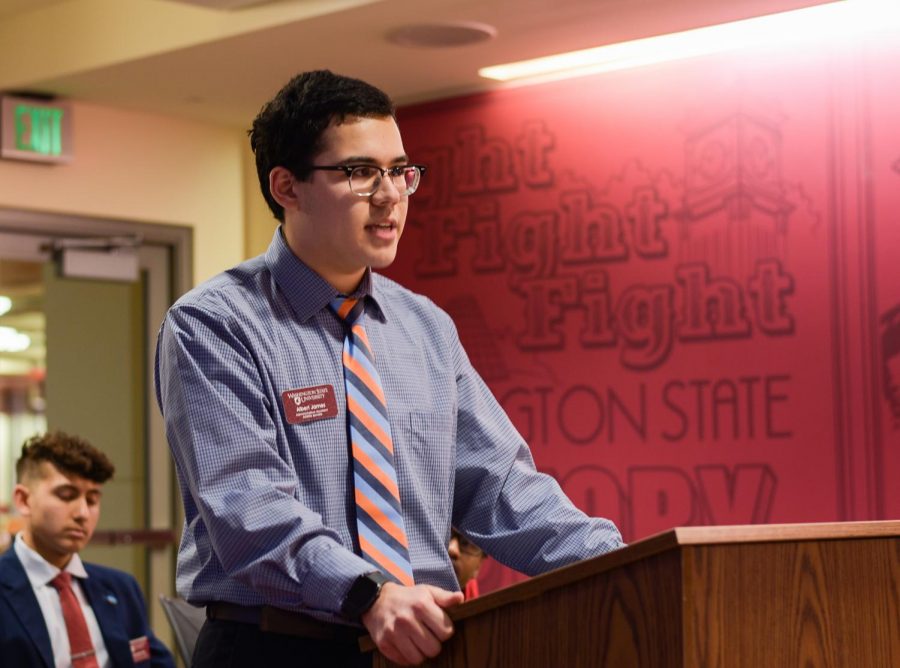 Administrative Assistant Albert James said he has been diminished for his position and attacked for his appearance by the senators.

A vote of no confidence in ASWSU Senate Pro Tempore Hannah Martian’s ability to continue her position failed 6-11 during the meeting Wednesday night.

The voting was done anonymously by ballot after senator Connor Simmons said the people in the senate body were terrified of the repercussions of casting a vote against Martian.

James said he wanted to testify to the allegations that the ASWSU senate harbors a toxic work environment. He said his position within ASWSU has been diminished on numerous occasions and has even been attacked for his appearance by the senators.

He said the senators who are leading the charge against the toxic work environment are actually contributors. James said one senator stated that his position within ASWSU “was worth less than the freshman delegates.”

James said the constant conflict within ASWSU has made him unsure of his future in the organization. He said he is not immune to the toxicity and has found himself being hurtful and unkind in response to others doing the same.

“I’m here to say that you cannot throw rocks when you live in a glass house,” James said.

After James’ testimony, Martian delivered a statement before excusing herself so the senate could cast their vote.

In her statement, Martian issued a number of apologies to both current and former members of the senate.

“I’m sorry to those who feel they cannot speak out against me for fear of retaliation,” she said. “It was never my intention to instill fear amongst members of this body.”

Martian said that none of the senators are perfect. The toxic work environment is the root of the problem and the senate is not taking the proper measures to fix it, she said.

“We refuse to do what is right because it is hard and it is ugly,” she said.

Many members of the senate delivered statements on behalf of former senators and affiliates of ASWSU.

Senator Jelani Christopher read a statement on behalf of former senator Monica Chavez. In her statement, Chavez recounted the circumstances surrounding her resignation. She said Martian felt that filling her seat was in the best interest of the senate.

Chavez said she felt like she was nothing more than a seat to the senate and was considered replaceable.

“I was not treated as a valued member of this body,” she said.

Chavez said she emailed her resignation to Martian who called her soon after with concerns that the resignation had ruined Martian’s reputation.

She said Martian made false claims against her which have damaged her character.

“I was one of her strongest advocates,” Chavez said in the letter, “but I do not see the person that I voted for this semester.”

Senator Kaye Gill delivered a statement on behalf of ASWSU adviser Berto Cerrillo. Cerrillo said that Martian is a stellar example of what a leader should be.

Gill also supported Martian remaining in office, saying her experience both in and out of the senate is unmatched. She said removing Martian from office would be a step backwards and would make it harder to pass legislation.

“It would be hard for us to find someone who cares about their work and the impact their actions have,” she said.

The ASWSU judicial board decided that Martian did violate a bylaw by moving Christopher to the finance chair without consulting the vice president. However, the board added that the bylaw is outdated and needs revision.

The board said they will be issuing Martian a letter of reprimand. They also recommended that the senate draft a resolution which includes mandatory training for every ASWSU officer on conflict resolution.

Editor’s Note: This article has been updated to correct a misidentification of Albert James and Berto Cerrillo as well as to clarify the vote of no confidence in Hannah Martian.