He switched majors from business to broadcasting because of his love for writing, storytelling, language skills 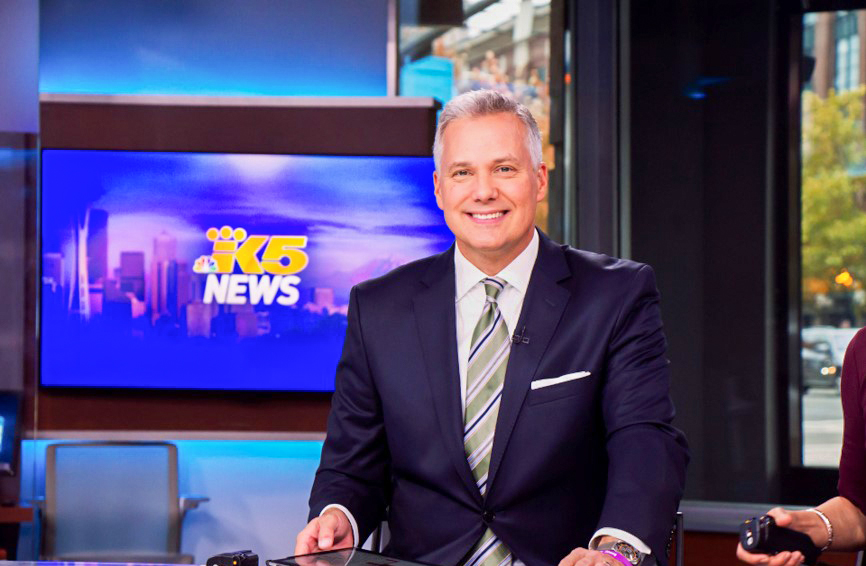 Mark Wright is an anchor for KING 5 in Seattle. Wright also worked as a reporter and anchor for Northwest Public Broadcasting when he was a WSU undergraduate. He covered city council meetings.

A Murrow alumnus lives his life and pursues his passion for broadcasting with a mindset of learning.

“I’m a student of life … I think that’s something that never stops and never should stop,” said Mark Wright, 1989 WSU graduate and King 5 evening news anchor.

Wright is one of the recipients of the Edward R. Murrow College of Communication’s 2020 Hall of Achievement Award. This award “honors and recognizes outstanding achievements of select graduates,” according to WSU Insider.

Born in Seattle, Wright lived in Burien until he was five. His family then moved to Ferndale where a part of his family’s property was his uncle’s organic vegetable farm. Wright said he and his brothers worked for his uncle growing up.

Wright said his rural upbringing was a “rustic experience,” but it taught him how to work hard at a young age.

“We heated our home with wood, and we raised our own beef,” he said. “We didn’t have television until I was in the eighth grade.”

When he transferred to WSU, he was part of the Carson College of Business, but did not do well. His love for writing, storytelling and language skills made him well-suited for the broadcasting program, he said. Wright realized he was in the wrong major.

Whenever he goes back to campus to help with the annual Murrow Symposium, Wright said he would advise students to not fear failure.

“Don’t be afraid of failure because sometimes failure will show you what you need to change in your life,” he said.

As a WSU undergraduate, he worked as a reporter and anchor for Northwest Public Broadcasting. He said this was an “invaluable experience.” Wright said he covered city council and would come back from the meeting not knowing what the story would be. However, that taught him how to report.

One of the things he finds fascinating about the Murrow College are the instructors, he said. Pullman Mayor Glenn Johnson was one of his broadcast professors. He said Johnson has been his friend and mentor for more than 30 years.

“The cool thing about the Murrow College is that your first teachers become your first mentors, and they turn into life-long friends,” Wright said.

Johnson said he remembers Wright reporting on serious stories in his TV news class. Wright was determined to pursue broadcasting as a career, learn as much as he could, show humility and not let fame change him, he said.

“[Wright’s] always learning,” Johnson said. “If you can have that trait as a student or as a reporter, then you’ll go far.”

Wright’s “student of life” mentality and work ethic is evident in his career journey. During his last semester at WSU, he worked as a legislative reporter for KBSU on Boise State Public Radio. Wright said he did not know how the state government worked when he started working in that position. He said he would ask a lot of questions, which he incorporated as a life practice.

“If you don’t know something, don’t pretend like you know something,” Wright said. “Never be afraid to ask a question. That has served me very well.”

After graduating from WSU, he worked as a board operator for KXLY radio in Spokane where he worked 20 hours per week with a salary of $5 per hour. This turned into a “huge raise” of $5.50 when he worked as a radio operator for the station. He then transitioned into television reporting.

“In a 10-year span, I went from part-time board operator at five bucks an hour all the way to the evening news anchor on television,” he said.

For eight years, Wright worked as a news anchor for KSTU in Salt Lake City. He joined King 5 in 2011 where he anchored the morning news for five years. He became an evening news anchor about three years ago.

Wright’s love for learning influences his love for his job, he said. He encourages people to keep an open mind and learn something new every day. A closed mind is the most dangerous thing in the world, Wright said. He also thinks the small, daily stories that are covered have a greater impact than the bigger stories.

“Every day, we paint a picture of the world for our audience, and we do that every day through little stories and stories that may not be the big story,” he said. “They’re very important to helping people understand the world around them.”

Outside of journalism, Wright plays golf and occasionally bowls. He also plays the drums. He said he plans to join a band and go on tour as a drummer if his broadcasting career does not work out.

Wright is also a member of the Rotary Club of Seattle. He served as president three years ago. Wright said joining a service organization and giving back to the community is important because it gives an individual credibility and an opportunity to be a part of the community.

“Do good and be good, and good things will come your way,” Wright said. “That’s my motto.”