Ates gets her 90th win, is tied for sixth on all-time singles won list. Yang Lee also came away with a victory 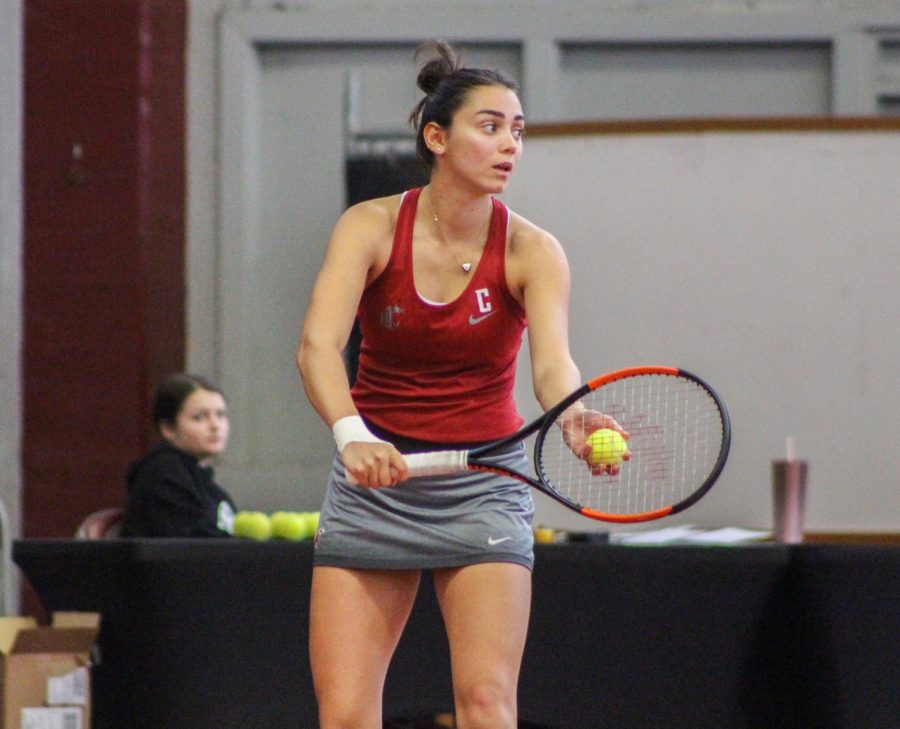 Senior Melisa Ates gets ready to serve against Utah on Sunday evening at Hollingbery Fieldhouse.

The WSU
tennis team earned its first conference win of the season against the Uni­versity
of Colorado, Boulder by a score of 6-1.

The Cougars won their sec­ond match
in a row and the first of their two-match home­stand. WSU will look to get the
weekend sweep against No. 44 University of Utah on Sunday.

WSU got off to a good start in
doubles competition by earning two victories to score its first point. Junior
Michae­la Bayerlova and sophomore Hikaru Sato upset Colorado’s senior Monica
Malinen and sophomore Sara Nayar, the No. 64 doubles team in the nation.

The Cougars stayed hot en­tering
singles play, as sopho­more Savanna Ly-Nguyen, No. 46 Bayerlova and Sato won
their matches in straight sets. The Cougars tacked on to their win by late
singles victories from Jittakoat and Lee, both in straight sets.

Bayerlova’s win over Malinen marked
her 12th of the season and maintained her undefeated season in singles.

“Every match is a new match,”
Bayerlova said.” “I’m trying to focus on every point.”

Ates remains at 89 career sin­gles
victories, as she fell short of a win against Colorado’s fresh­man Sophia
Derivan. Ates is seventh on WSU’s all-time sin­gles won list and will look to
tie former assistant coach Ekateri­na Burduli on Sunday.

“Her opponent played really well,
but really proud of how Melisa fought every point,” Hart said. “She’ll rebound
on Sunday.”

Colorado
will head to the west side to take on No. 30 Uni­versity of Washington at noon
on Sunday. WSU’s next match will be against the University of Utah at 10 a.m.
on Sunday in the Hollingbery Fieldhouse.