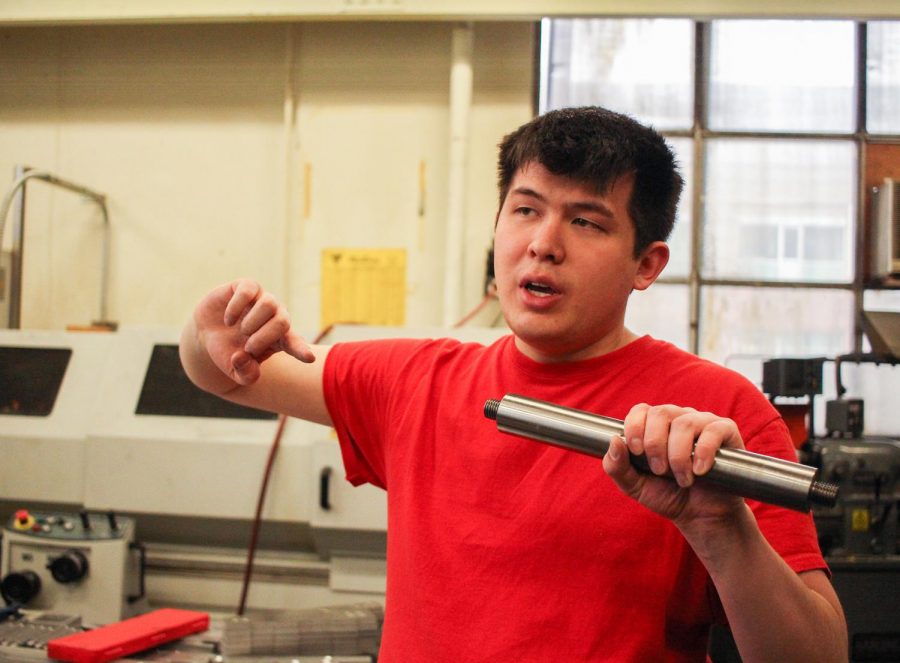 Crimson Robotics team captain Daniel Goto talks about the upcoming California trip to battle their robots on the show Battle Bots, on Friday at Dana Hall.

Crimson Robotics president Daniel Goto has been putting in between 70-90 hours per week to work on “Pain Saw,” which is the robot his team will bring to this year’s BattleBots competition.

“I think everyone who builds robots wants to go to BattleBots,” Goto said. “BattleBots is the Olympics of combat robotics.”

Crimson Robotics will compete against other teams in California next month for the newest season of BattleBots, a TV show in which teams flex their robot’s ability to destroy and demolish one another.

Goto said among the 500 teams who applied, only the top 80 teams were chosen. This was the first time Crimson Robotics applied, and luckily, he said, they were one of the 80 teams. In addition to the prize money, the winning team will also get a trophy-like award called The Giant Nut.

“The real thing you gain from it is [the] experience, connections and a lot of publicity for your team,” he said.

Pain Saw has chainsaw blades built onto it, Goto said. It also has a lifting arm capable of lifting 800 pounds at the tip. The team has other weapons they can swap out like circular saws.

“The chainsaw is a unique weapon [that] hasn’t been used for the show,” he said.

Pain Saw is supposed to resemble a spaceship, Goto said. Its main color is gold and its secondary and tertiary colors are crimson and gray. The team is bringing two fully-built robots and the third one as a spare.

He said each robot is made from about $9,000 worth of parts. The team applied for grants and sought funding from different departments in the university to cover some of the cost of the robot.

The combination of durability and putting on a good show, he said, is what constitutes a good battle.

“You have to balance aesthetics with … reliability,” Goto said. “The best robots find a way to incorporate aesthetic elements into their structural design in the robot.”

Brad Taylor, mechanical engineering lead for Crimson Robotics, said he used computer-aided design — a software used to create 2D or 3D models of an object — to draw illustrations of their robot.

The mechanical engineering team had to do all the design work and get it manufactured as soon as possible, which takes some time, Taylor said.

“I think sometimes a lot of engineering programs are underrated,” Taylor said. “I think this is a good spotlight for us to kind of show … what we’re doing over here.”

“Sadly I won’t be able to go to the competition because of my classes, but just seeing how hard the team has worked … it’s truly incredible that we go on [the show],” Turchik said.

Dihel said he cannot go to the competition, but he can still help the team with programming.

“It’s like Google Docs for coding,” Dihel said. “We can all make remote changes at the same time then upload it to the robot.”

Goto, who is also the founder of Crimson Robotics, formed the team in December 2018. They have been designing a robot since then.

“I always wanted to compete in combat robotics and compete in BattleBots,” Goto said. “I like building big, expensive, really destructive things and getting into this competition this year with Wazzu means that this is my way of getting my foot in the door.”The new season of BattleBots will be aired at 8 p.m. May 15 on Discovery Channel, according to the BattleBots website.