WSU rally falls short over the weekend in Arizona 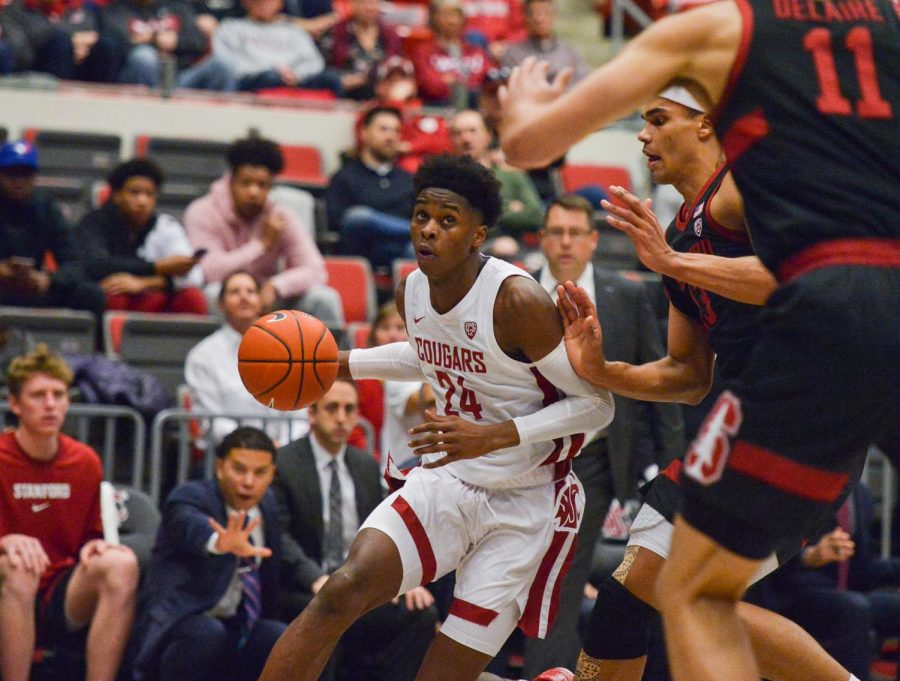 Freshman Guard Noah Williams looks to make a move against Stanford on Feb. 23 at Beasley Coliseum.

WSU men’s basketball ended the regular sea­son
schedule with an 83-74 loss to the Arizona State University Sun Devils on
Saturday in the Desert Financial Arena in Tempe, Arizona.

Junior forward Tony Miller led the Cougars (15-16, 6-12) in
scoring for the third time of his career with 21 points, 15 of which came in
the second half. Like his previous team-leading per­formances,
he came off the bench. Miller added eight rebounds to his stat sheet, six on
the offen­sive glass.

WSU recorded 50 total rebounds
against ASU (20-11, 10-8), the most rebounds from WSU in a conference game this
season.

Junior guard Isaac Bonton continued
his double-digit scoring streak against ASU but struggled shooting the ball
while doing so. Bon­ton scored 17 points and shot five for 25 from the field,
one field goal attempt shy of his season high.

Bonton also turned the ball over to
ASU 11 times, the most turnovers in a conference game from any WSU player ever.

Senior forward Jeff Pollard sat on
the bench once again with a hand injury, his participation in the Pac-12
Tournament will be a gameday decision, per the team. Freshman center Volo­dymyr
Markovetskyy took Pollard’s place in the starting lineup and made his first
start of his career.

Markovetskyy finished the game with
a dou­ble-double, recording 11 points and 10 rebounds, both career-highs.

Markovetskyy scored WSU’s first
basket with a fouled shot underneath the hoop; he made the free throw as well.
WSU took a 12-4 lead with 15:12 left in the half, then WSU made one field goal
over the course of the next six minutes.

ASU took a 15-14 lead with over 11
minutes left in the half; the Sun Devils held this lead for the remainder of
the half.

Sophomore forward CJ Elleby started
the game missing his first six shot attempts. His first basket came in the
final five minutes of the half off a fadeaway mid-range jump shot. He missed
his next three shot attempts to finish out the half one for 10 from the field.

ASU junior guard Remy Martin missed
his first three shots of the game and then made his first basket with 7:34
left. He went two of four from the field after his first field goal.

ASU led WSU 40-29 at halftime with
Martin leading the way for the Sun Devils with 10 points. Senior guard Jervae
Robinson and Miller co-led the Cougars in scoring with six points each.

WSU started the first four minutes
of the sec­ond half with a 11-5 run, the last basket came off a Bonton
3-pointer to cut ASU’s lead down to five.

The Sun Devils turned their
struggles around in the following three minutes and extended their lead to 13
with 13:33 left on the clock. ASU held a double-digit lead up until eight and a
half minutes left in the game.

Elleby made his second shot of the
game with 8:39 on the clock, this was his last field goal of the night. Off 19
shot attempts, he finished the game shooting a little over 10 percent from the
field; a new career low.

WSU started its comeback attempt
once ASU’s lead grew to 61-44 with 10:37 left in the game, the largest lead of
the night. A 21-4 run from the Cougars that lasted over six minutes tied the
game at 65 with three and a half minutes left in the game.

WSU tied the game once more at 68
with 2:50 on the clock, then Martin made a basket 13 sec­onds later and
propelled the Sun Devils to a 70-68 lead. With this basket, Martin surpassed
former ASU guard and current NBA superstar James Harden on the Sun Devils’
all-time scoring list.

The Cougars’ momentum slowly
deteriorated after this basket and they trailed for the remain­der of the
contest.

The Sun Devils defeated the Cougars
83-74 and secured the third seed in the Pac-12 stand­ings. WSU finishes the
year at the 11th seed for the third consecutive season.

The Cougars
head to Vegas to compete in the first round of the 2020 Pac-12 Tournament
against the University of Colorado Buffaloes at 8:30 p.m. on Wednesday. The
matchup will air on the Pac-12 Networks.