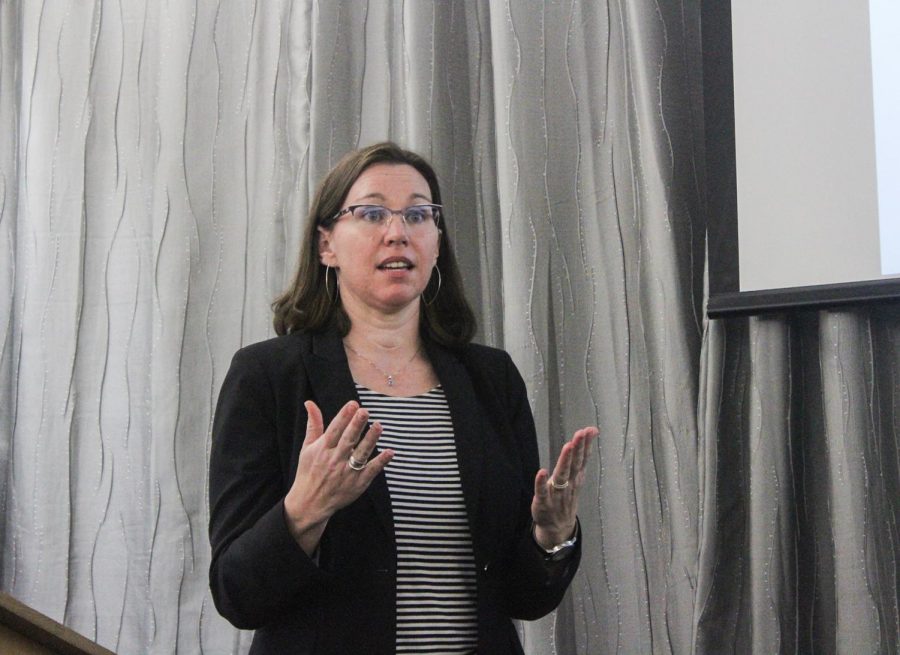 Anna Plemons, WSU English professor, discusses some of the benefits and challenges of education within correctional facilities on Friday afternoon at Neill Public Library.

The first time Anna Plemons visited a prison an inmate’s pet bird landed on her shoulder. From then on she said when visiting a prison: always expect the unexpected.

Plemons is a WSU clinical assistant professor of English who has taught creative writing to incarcerated people in prisons in several states.

She shared her experience at the first annual community event for the new WSU Interdisciplinary Conference on Social Justice on Friday at the Neill Public Library.

The event began with the viewing of the second part of “College Behind Bars,” a four-part film about incarcerated people getting their education while serving their sentences through the Bard Prison Initiative.

The film touched upon how these incarcerated people ended up in prison, what effect their incarceration had on their families and how BPI functioned.

One section of the film was dedicated to a debate group within the institution and how they created their own community within BPI. The debate group ended up winning a debate against Harvard University.

Following the film, Plemons spoke about her experiences as a teacher within prisons and issues within these programs.

Plemons said prison teachers should not only focus on teaching, but on bridging distances and strengthening relationships with incarcerated people and those outside of prison.

“Whenever I have a chance to be in a room with folks talking about issues of incarceration,” Plemons said. “The thing that I always want to come out of it is for folks to sort of expand their understanding of who might be in prison and how we might interact with and support those folks.”

Plemons said many of these prison teachers think their class is what changes inmates, but really the inmates already want to change.

“People do change over the course of education,” Plemons said. “However, they came because they want to change and that is a key distinction from your class is changing them.”

A Q&A followed Plemons’ address and audience members engaged in a conversation about incarceration and education.

One audience member asked how custody staff and inmates could bridge their distances to prevent injustices within institutions.

Plemons said building relationships requires custody staff to respect those who are incarcerated and see them as people rather than inmates. but it is hard to because of how the rules of the institution work.

Plemons said she once had to turn down a phone call from an inmate who was trying to thank her for a writer’s copy of a book on incarceration she wrote, because she was standing next to a correctional officer and they prohibited calls between incarcerated people and staff.

Another audience member asked what terms incarcerated people call themselves, which led to a discussion about the different meanings and usages of these terms.

Plemons said “inmates” and “prisoners” were the most common terms, while “convict” and “felon” were used for specific cases. She added that inmates very rarely call themselves incarcerated people.

“I’ve always just referred to people as inmates or prisoners and I never really considered the social impacts of the way that we’ve referred to them,” he said.

Plemons said she wants to focus on bridging the transition from incarceration to the rest of the world. While she said her position at WSU may seem like a pivot away from prison, she is ready to get back into helping those incarcerated.

“I have a lot more sympathy towards incarcerated persons,” she said. “I learned that they are trying to better themselves.”

Kathryn Manis, chair of WSU SJCON and an organizer of the event, said the conference plans on having another event like this next year.

“I hope that one of the things people take away from this event is that Pullman and WSU are safe places to engage in conversations, to throw out ideas, and to disagree with each other if that happens,” she said.