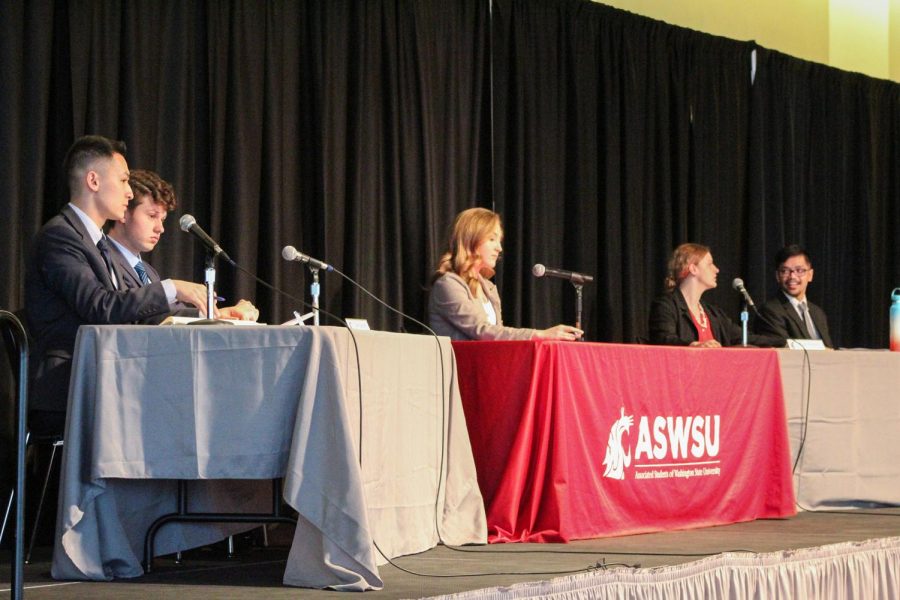 The ASWSU presidential and vice presidential candidates debated about topics including student involvement, mental health and political participation during the general debate on Sunday, even answering a question asking if they were Taylor Swift fans.

Kylie Waddill and Donavyn Velez-Fucal debated against Curtis Cohen and Sean Doster for the second time in the CUB Senior Ballroom, answering questions from a debate moderator and the student body.

Out of the four students who asked questions to the candidates, three of them were affiliated with ASWSU. Fewer than 20 people attended the debate.

One of the topics the candidates debated about was mental health resources on campus and whether they felt like they are underutilized.

Cohen said he and Doster felt mental health resources are underutilized by students because there’s a lack of communication that they exist.

“We have the resources but students just aren’t knowing about them,” he said. “While the resources might be fairly good right now, we think there’s a lot of room for improvement.”

Waddill disagreed with Cohen. She said mental health resources on campus are not underused. The issue lies in that there is a lack of availability for appointments because many students are using those resources, she said.

“Ultimately, I think what’s underused is our ability to build community here and get students connected with resources that they need that will support their mental health,” Waddill said.

One of Cohen and Doster’s primary campaign goals is to increase student involvement among first-year students and those living in residence halls.

A way to address that was by creating a new website to improve upon CougSync, Cohen said. The website would match student organizations that align with self-inputted academic focuses, cultural backgrounds, interests and passions.

“This really bridges the gap for a student,” he said. “It helps them find the best organization that they can be a part of.”

Addressing student involvement, Waddill said, does not require creating a new website. She said using CougSync to its “fullest potential” is important, which means the site has to be “cleaned up.” This includes checking which clubs are still active and connecting groups to one another more effectively.

Velez-Fucal said he and Waddill plan to hold town-hall meetings around campus. This would help them become more accessible to students, ensuring people’s voices are being heard, he said.

“There are 5,800 students that live in our residence halls going into this year,” Shaffer said. “For years, they have felt that ASWSU has not listened to their voice and that they have been an underrepresented group on campus.”

He asked what the candidates think the number one concern was for students living in residence halls and how they plan to address it.

Environmental issues, self-care and mental health are major concerns for those who live in residence halls, Waddill said. Educating students to better take care of themselves is one of their campaign goals, under their “healthy body, healthy mind” category.

She said they plan to develop a workshop series that focuses on teaching students about self-care strategies. The workshop would include information about how to make healthy meals and how to better manage activities.

Cohen said the concern was students not feeling connected with the rest of the student body. ASWSU needs to do a better job collaborating with residence halls about getting involved with student organizations, he said.

“We can’t expect students to just come along here to the fourth floor and start asking about organizations,” he said.

Doster said safety around some residence halls such as around Scott-Coman, Streit Perham and Olympia halls due to a lack of lighting.

“There’s a lot of dark pathways in and around the residence halls,” Doster said. “Students should feel safe walking to where they live on the campus they go to.”

Student engagement around politics on campus was another topic the candidates discussed.

Velez-Fucal said promoting political participation on campus is not all about the flyers and social media posts. He said that face-to-face contact with students is a more effective way to engage students to vote.

Cohen said this election didn’t have a lot of advertising to notify students an election was happening. He said this can be solved by making sure ASWSU is recruiting the best people to hold executive positions.

“For us that’s really disappointing and discouraging,” he said.

Doster said subsidizing the cost to run for elections would help student engagement. Running for an election can cost more than $1,000, he said.

“That can be a barrier for a lot of students,” Doster said.

He said their plan to address that is to have ASWSU reserved funds for candidates to create a more diverse field of candidates.