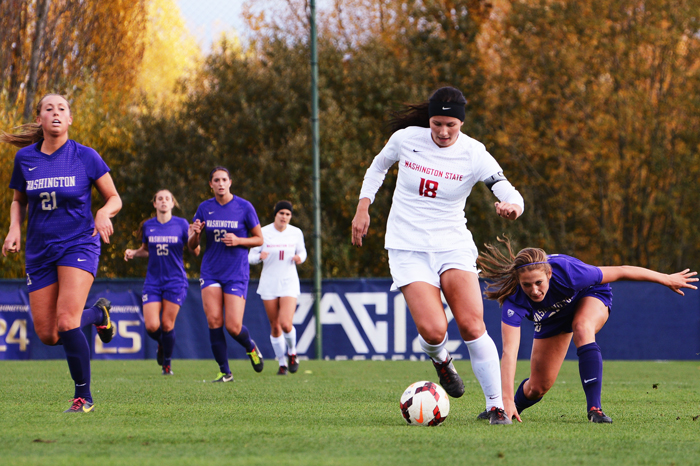 The Washington State soccer team extended its undefeated streak against the Washington Huskies to a decade on Friday, proving once again that you can’t teach an old Dawg new tricks.

When junior midfielder Jocelyn Jeffers went out with an injury late in the match, Head Coach Keidane McAlpine was forced to make a substitution and inserted freshman forward Kaitlyn Johnson into the lineup. She did not disappoint.

In the 81st minute of play, Johnson received a long through-ball down the left side of the park from junior midfielder Mesa Owsley. After taking a few dribbles, Johnson shot a left-footed laser toward the far post for the first collegiate goal of her career as the Cougs won 1-0 against its rival, the University of Washington Huskies.

After sluggish play from both teams in the first half, McAlpine stressed the importance of acting as the aggressors in the second half.

“We just need to pick up the intensity going forward,” he said at halftime. “Even in (our) patience we have to move the ball faster.”

Although only one goal was scored in the match, Washington State responded to McAlpine’s demands in the second half with an added level of urgency and intensity.

The Cougs had an opportunity midway through the second half when Johnson chipped the ball into the box for sophomore forward Kourtney Guetlein, but UW redshirt-sophomore goalkeeper Megan Kufeld rose above Guetlein to snatch the ball away.

Moments later, sophomore forward Cara Wegner sent a free kick on frame that hit the crossbar and bounced to Owsley, who passed to senior forward Micaela Castain for a goal. However, the referee determined Castain was offside, negating the score.

Entering the match, Johnson had just nine shots on the year while appearing in 17 of the team’s 19 games, helping the Cougars improve its record to (14-3-3, 7-3-1 Pac-12) and securing a second place finish in the conference.

The win extended Washington State’s undefeated streak against UW to 7-0-3. The Cougs haven’t lost to the Huskies in a decade.

According to Washington State Athletics, the team’s 14th win of the season tied a school record. The second place conference finish was also a first in the record books as WSU solidified its runner-up spot, which was the best finish for the team in the Pac-10/12 era.

Washington State learned Monday that it was chosen as one of 64 teams to play in the 2013 NCAA Division-I Women’s Soccer Championship.

WSU will host the Illinois Fighting Illini in the first round of the tournament Saturday at 1 p.m.