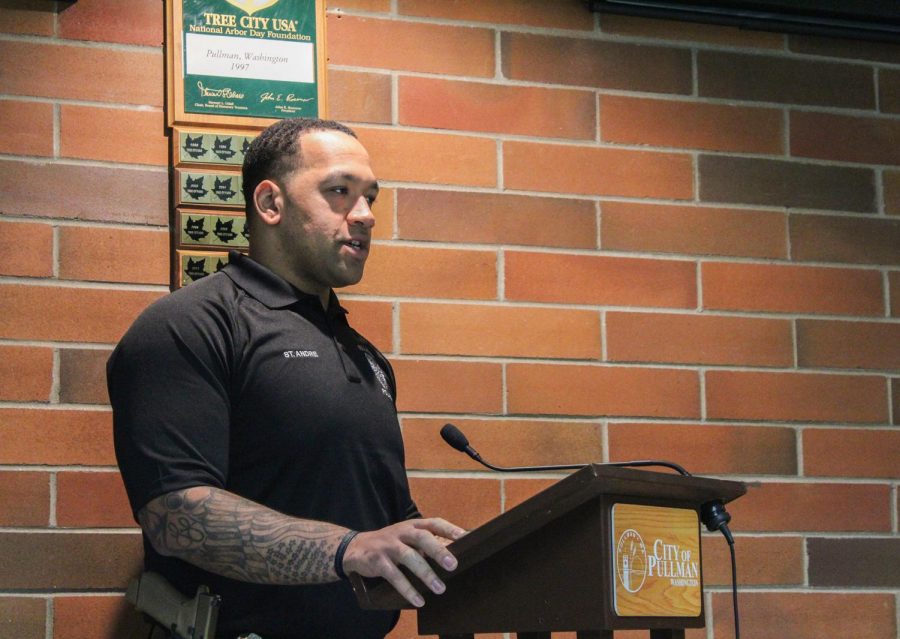 Officer Luv St. Andre describes how his childhood and college experiences impacted his decision to go into law enforcement on Monday.

Officers Breauna Banks, Jared Haulk, Luv St. Andre and Holden Humphrey appeared before the committee during the its monthly meeting at City Hall.

“These four officers probably represent about 150 people that applied for those positions,” Police Chief Gary Jenkins said. “We’re very selective and it’s an accomplishment today for them to be standing as Pullman Police officers.”

Each officer had different hiring dates. The department hired Haulk two weeks ago and Banks joined the department last summer.

St. Andre said he never thought he would be a police before joining the department. He said officer shootings targeted at civilians around the country inspired him to be a representative of his community.

“I just wanted to be a better representative of what I felt like I had when I was growing up,” he said.

He knew he wanted to be a police officer in Pullman after Jenkins directly responded to an email he sent after submitting his application, he said.

“You usually don’t get emails and stuff like that from chiefs or sheriffs,” St. Andre said.

Banks said she attended the WSU cadet program as an undergraduate and was convinced she wanted to be an officer after.

“Doing ridealongs I kind of figured out Pullman was somewhere I wanted to be for the rest of my career,” she said.

Humphrey said he always wanted to be a police officer since he was a child. As a child, he always was the cop whenever he played ‘Cops and Robbers’ with his friends.

“I was always the police officer no matter what game we were playing,” he said. “As a kid, it wasn’t for the same reasons that I want to be a police officer as I do now. You think a lot differently when you’re 6 or 7.”

Haulk said he has been welcomed in Pullman so far as a police officer, which surprised him.

“I’ve heard horror stories about starting at police departments and how they treat the new guys,” Haulk said. “It’s been awesome. Everybody has been super professional and super courteous to me.”

Jenkins said the department is applying for a grant with WSU criminal justice associate professor David Makin to research the efficacy of de-escalation techniques and training among officers.

“There has been very little or no research on how well if what is being taught is working,” Jenkins said. “This will be the first research that will be available … nationwide for law enforcement.”

Makin, committee multicultural representative, said this was a one of a kind study. He said the study will aim to increase accountability and transparency among police departments.

Jenkins said the application will be submitted by Wednesday. The department will know if it received the grant this September.