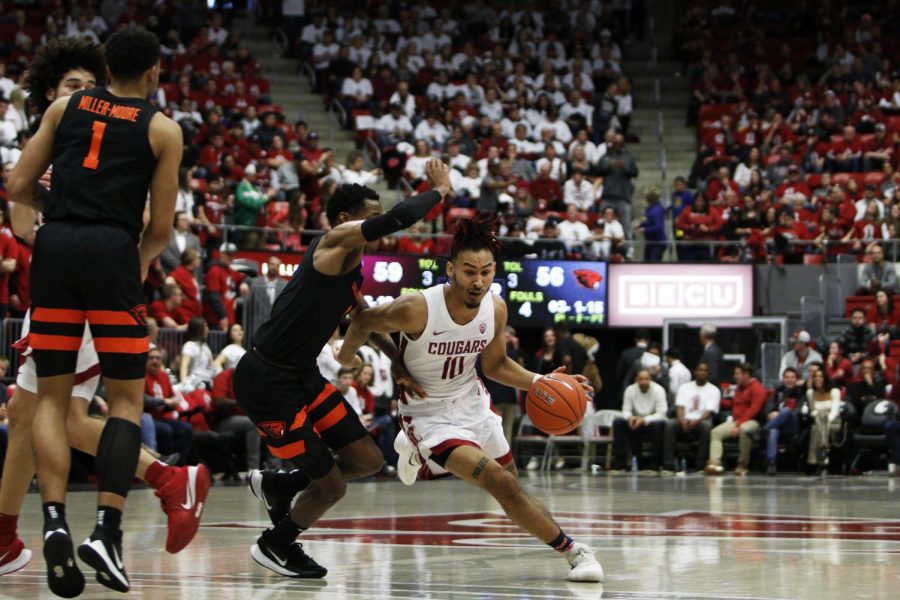 In the first round of the 2020 Pac-12 Tournament, the 11th
seed Cougars will face the sixth seed University of Colorado Buffaloes at 8:30
p.m. on Wednesday at T-Mobile Arena in Las Vegas.

The 23rd annual Pac-12 Tournament hosts all teams from the conference in a four-round bracket to crown the season’s conference champion. WSU (15-16, 6-12) comes into this year’s tournament with a 5-20 record, historically, the last win coming in the 2009 tournament.

Coinciding with its record, WSU has never made it to the championship round of the Pac-12 Tournament, the only team in the conference to never do so.

Elleby said he’s excited to head down to Vegas and go into
the tournament with a “clean slate.”

“Everybody is 0-0; only game that matters is the next one up,”
Elleby said.

Junior guard Isaac Bonton will play in his first Division I conference tournament on Wednesday. Bonton said it’s exciting to be a part of the tournament, and the team is ready to surprise everyone after WSU’s tough Arizona road trip.

Bonton had 18 turnovers across both road games against the
Arizona schools to finish out the regular season. He leads the Pac-12 in
turnovers per game with 3.6 per game.

A good portion of Bonton’s 11 turnovers against ASU on
Saturday were stolen passes to WSU bigs down low. He said the team can be a
little sharper when dishing or receiving passes underneath the basket.

“It definitely comes from my part being the point guard.
With the ball in my hands, I got to take care of the ball better,” Bonton said.
“We just got to slow down and be tight with the ball.”

Besides WSU’s turnover trouble against the Arizona schools,
Elleby, the Cougars’ leading scorer this season, averaged eight points per game
and shot 18 percent from the field across both games.

Elleby said he needs to put more trust in his teammates and
let the shooting come to him at the tournament.

“[I need to] trust that I can give it up and eventually
it’ll come back around,” Elleby said. “Trying to let the game come to me and
play for my teammates really is what I need to do.”

Arguably the most beneficial takeaway from ASU’s victory on Saturday was the Cougars’ rebounding. WSU brought in 50 total rebounds against ASU, the most against any conference opponent this season. Twenty-five of WSU’s 74 points that night came off second-chance points.

“[Markovetskyy] takes up space, he gets [rebounds], too. But
you have to account for him when he’s around the rim,” Smith said. “So that
probably frees up CJ and Tony, for sure.”

“He wants to be there badly. It’s his last opportunity as a
senior,” Smith said. “We could really use his leadership if nothing else. He
could be like Willis Reed down the tunnel.”

Elleby added that translating the team’s recent rebounding
success will be a key factor in achieving a win against Colorado (21-10, 10-8).

“That’s very important, because when we were down to
Colorado that x-factor of the game was [Evan] Battey, and he kind of killed us
on the offensive rebounds,” Elleby said. “That’s one of their best options of
scoring is their second shot off the rebounds.”

Last time against Colorado, WSU lost to the Buffaloes 74-56
and gave up double-doubles to three different Colorado players. Colorado junior
guard McKinley Wright IV accounted for one of those double-doubles with 10
assists, the most individual assists allowed by WSU all season.

Smith said Wright’s scoring ability gives the Cougars a
separate challenge by itself. But mitigating Wright’s playmaking comes down to
how well the Cougars can play their zone defense.

“We got to keep him
in front and not let him get paint touches,” Smith said. “I don’t know if we
can totally control assists, it might be more on the contests.”

As opposed to any other season contest this year, Bonton
said the team is ready to face the Pac-12 competition in a tournament
atmosphere.

“The Pac-12 has shown all year that any team can win on any
night, and I feel like nothing is guaranteed in this tournament. I think
everyone knows that coming in,” Bonton said.

WSU’s 15 total wins this year are the most in a season since
the 2011-12 season. With program-defining moments behind some of these wins, Smith
said a tournament win on Wednesday would be a great addition to a monumental
season.

“It’s really important for us as a program — to prepare yourself for the post-season no matter what,” Smith said. “The season gets long, the stars will shine this time of year, and our star needs to be our team.”

A win against Colorado will propel WSU to the next round where they would face the third seed Arizona State University Sun Devils, who WSU went 1-1 against in this year’s season series.

WSU will tip off against Colorado at 8:30 p.m. Wednesday in
T-Mobile Arena in Las Vegas. The game will air on the Pac-12 Networks.