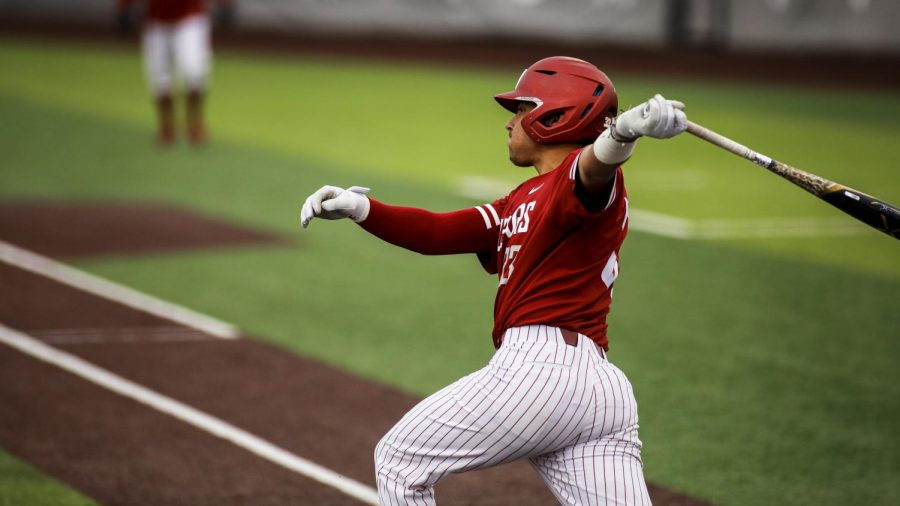 Redshirt sophomore catcher Jake Meyer hits the ball during the game against Gonzaga on Tuesday afternoon at Bailey-Brayton Field. The Cougars play the Golden Bears this Friday.

For the Cougars, sophomore first baseman Kyle Manzardo had two hits, a run and an RBI.

“It comes down to free
bases,” head coach Brian Green said. “It’s an issue we need to correct.”

On the mound getting the start for the Cougars was sophomore pitcher Brandon White. White pitched for the first time since the Cougars’ opening game in mid-February. He pitched just one inning and gave up two hits and an earned run.

For the Bulldogs, sophomore pitcher Keaton Knueppel started on the hill. He pitched three innings giving up six hits and one earned run.

Manzardo continued his
hot streak and hit a home run in his first time up to the plate in the first
inning.

In the top of the
third, redshirt junior infielder Brett Harris scored for the Bulldogs on a
double from Lund.

Another run was added
when senior infielder Josh Bristyan hit a single that scored Machtolf.

WSU made another
pitching change as sophomore pitcher Connor Barison replaced Barnum in the top
of the third.

GU quickly scored
again as a double from freshman infielder Anthony Garrett got Bristyan all the
way home.

After giving up another run, Barison was replaced by junior pitcher Hayden Rosenkrantz. The Cougars used four pitchers in the first three innings.

A sacrifice fly
brought another run for Gonzaga and a double from Lund scored Harris and junior
outfielder Isaac Barrera.

The inning ended after the Bulldogs scored nine runs, and the Cougars trailed 10-1 going into the bottom of the third.

The Bulldogs made
their first pitching change of the game when they brought in freshman pitcher
Reagan Haas in the bottom of the fourth inning.

Lund doubled in the
top of the fifth to score Barrera and Harris for the Bulldogs. The Cougars
trailed 12-2 and made their fifth pitching change of the game when they put
redshirt junior pitcher Tanner West on the mound.

West gave up one run
in his first inning on the hill. WSU was down by 11 entering the bottom of the
fifth.

A triple from
sophomore shortstop Kodie Kolden scored redshirt sophomore catcher Jake Meyer
for the Cougars in the bottom of the fifth.

A Yake triple tacked
on another run for the Bulldogs in the top of the sixth as Garrett scored all
the way from first.

Lund’s sixth RBI of
the game scored Yake as Gonzaga went up 15-3 in the top of the sixth.

The Cougars made
another pitching change in the top of the seventh inning bringing in freshman pitcher
Grant Taylor.

In the bottom of the
seventh Haas was replaced on the mound with freshman pitcher Jacob Rutherford
for the Bulldogs.

Freshman pitcher Ethan
Ross came in for the Cougars to close out the game on the mound in the top of
the ninth.

The Cougars finished the game losing 15-3 to end their four-game winning streak.

“We have to continue
to get better,” Green said. “We need to take it pitch-by-pitch. We have the
fewest strikeouts in the Pac-12.”

The Cougars begin their Pac-12 conference play against the University of California Golden Bears starting at 3:05 p.m. Friday in Pullman.