Evergreen’s end of the year awards for WSU 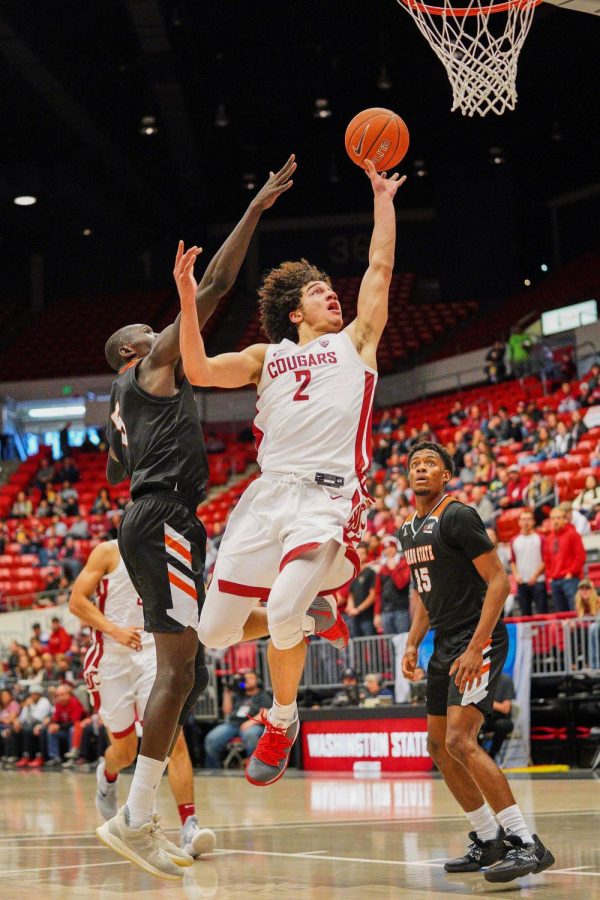 CJ Elleby is tied with Cougar legend Steve Puidokas with 559 points and has a chance to pass him with any bucket in the Pac-12 tournament and have third place all to himself.

Player of the Year: CJ
Elleby

In a surprise to absolutely no one, Elleby was the best player on the team this season. The sophomore forward and Seattle native took a big step forward in his second year in Pullman. The team underwent a lot of changes in the offseason; they lost leading scorer Robert Franks and had only five players return from the previous season. Elleby bumped his scoring average by more than three points, up from 14.7 points per game as a freshman to 18 points per game this season. He finished fourth in the conference in scoring, up from 11th last year. Elleby led WSU in four of the five main statistical categories: points, rebounds, steals and blocks. Those marks helped him earn a spot on the Pac-12’s all-conference first team. After having the best scoring season in Cougar history, he followed that up by having one of the best scoring seasons by a sophomore as well. He is tied with Cougar legend Steve Puidokas with 559 points and has a chance to pass him with any bucket in the Pac-12 tournament and have third place all to himself.

In his last season in crimson and gray, the senior took new head coach Kyle Smith’s system to heart and played his butt off on defense. His defensive counting stats are not eye-popping at first glance, a few players averaged more steals and blocks than him, but his impact on the defensive end was more valuable than those stats. Robinson was recognized by the conference for his elite defense; he was named an honorable mention for the Pac-12’s five-man all-defensive team. He consistently took on the hardest defensive matchup each game. He guarded the opponent’s best perimeter player every time out on the court. He held multiple top Pac-12 guards to below their season scoring averages: guys like Arizona State’s Remy Martin, California’s Matt Bradley, Oregon State’s Ethan Thompson, Stanford’s Tyrell Terry and Colorado’s McKinley Wright IV.

Newcomer of the Year:
Isaac Bonton

Playing point guard is
one of the most difficult jobs on the court. Playing it for a new team, a new coach
and with a bunch of new teammates is even more difficult. Bonton was able to
overcome those difficulties in his junior year and first year as a Cougar. He
made an immediate impact for a WSU team that was looking for a running mate for
their superstar, CJ Elleby. Bonton proved very early on in the season that he could
be that guy. He started 26 of the 27 games he played in and started out the
season with five straight double-digit scoring games. His scoring and
playmaking would remain persistent all year long, despite some experiencing some
struggles playing in an offense for the first year. He had the second-best scoring
averaged on the team with 15.3 points per game, making him the 11th best scorer
in the Pac-12. He also registered 3.9 assists per game, good for best on the
team and ninth in the conference.

Coach of the Year: Kyle
Smith

This was by far the
easiest one to decide. As the only head coach on the team, Smith runs away with
this honor in a landslide on the strength of his 15 wins and improved defense.

Game of the Year: The
Klay Game

It does not get better
than a Beasley Coliseum that is very full of fans honoring one of the greatest
basketball players in WSU history. Ending that game with a victory makes it
that much better. The Cougars beat the Oregon State Beavers that game 89-76
while Klay Thompson cheered them on from the baseline. The WSU players fed off
the craziest Beasley crowd, having some of their best games of the season. Bonton
had not only the best game of his season, but maybe the best game of the entire
WSU season. He scored 34 points, tied for the most points scored by a Cougar
this year. He also had eight rebounds and eight assists while shooting a
perfect 14-14 from the free throw line and made one of the best shots of the
season, which we will get to later. Freshman guard Noah Williams also had a career
game against the Beavers. He dropped 17 points in 32 minutes, the third-most
minutes he played in a game.

Performance of the
Year: CJ Elleby’s 34 points against UW

A player’s ability to
step up in important games can sometimes define their career. In Elleby’s first
rivalry game against the Huskies as WSU’s top player was an important game, and
he delivered. Before his career-best outburst, Elleby had scored over 20 points
21 points in his career. His best scoring performance was 27 points, a total he
had hit four times in his time as a Cougar. Elleby also grabbed 10 rebounds for
his fifth double-double of the season and recorded a season-high three blocks. WSU
needed Elleby to step up in that game in order for them to win. The Cougars’ next
three top scorers had a combined 32 points, with none of them scoring more than
12 points.

Play of the Year: Tie
between Elleby’s gamewinning 3-pointer against ASU and Bonton’s halfcourt shot
against OSU

How can someone even decide between these two amazing plays? Elleby ending the game against the Sun Devils with a dagger 3-pointer is probably the best play of his young Cougar career. WSU held off multiple comeback attempts from ASU but still found themselves down by one point with under 20 seconds left to play. Elleby then called game when he pulled up from deep and buried the game-winning shot. Bonton’s incredible shot was a much different type of play than Elleby’s. The game was not on the line and his shot actually gave the Cougars a six-point lead. This game already had a very electric atmosphere around it because WSU was retiring Klay Thompson’s number. The crowd was as large and loud as it has been in a very long time and Bonton pulling up from behind midcourt caused the fans to go crazy. The people going the most wild were Thompson and his Golden State Warriors teammate Steph Curry on the baseline where the shot went it.