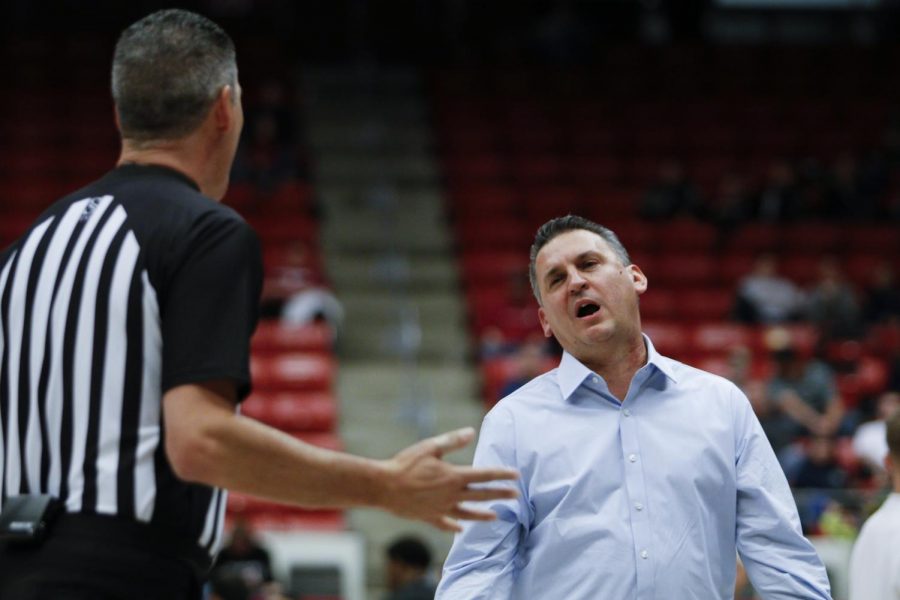 This reporter learned that Smith has an interesting way of iterating and reflecting upon the game of basketball.

First-year basketball head coach Kyle Smith gave the program
a breath of fresh air and high hopes for the near future.

Alongside the milestones that Smith achieved this year, he
gave Cougar fans a unique perspective on how to perceive WSU basketball. I
learned early on this season that Smith has an interesting way of iterating and
reflecting upon the game of basketball.

With every article I wrote on the team from that point on, I
made it a goal of mine to insert a special Smith quote, or ‘Smith-ism’, into
every story. Let’s reflect on the top-10 ‘Smith-isms’ from 2019-20 season.

WSU defeated the University of Idaho Vandals in Dec. 2019
while junior guard Isaac Bonton did not play with an apparent hip injury. When
Smith was asked about Bonton’s recovery process, he said he hoped the injury
was not too severe as the team needed his scoring.

Expressing Bonton’s inclusion on the court as ‘having
another bullet in the chamber’ is an interesting way of emphasizing his
importance when scoring the ball. However, this quote is far from the most
bizarre.

At the time, WSU held a 14-14 record and were on the brink of falling below .500 for the first time since the 2019 Cayman Classic in Nov. 2019. WSU was set to travel to Seattle for the second leg of the 2020 Boeing Apple Cup on Feb. 28. When asked about the possibility of holding a losing record after the road trip, Smith responded with this ‘Smith-ism’.

Referring to a team’s momentum throughout a season as having
‘ebbs and flows’ further showed that Smith views his teams in a rare way.

Sophomore forward CJ Elleby scored the game-winning basket
against the Arizona State University Sun Devils on Jan. 29. In Smith’s
post-game press conference, he was asked about the effect that the recent news
of Kobe Bryant’s death gave the team that night.

Smith said this ‘Smith-ism’ about Elleby’s game-winning shot
being comparable to the historical clutch mentality from Kobe and Michael
Jordan. Smith further established at this press conference that he has an
undoubtable love and appreciation for his team.

Smith compared Bonton’s role as the WSU starting point guard
to be as important as Michael Vick was for the Atlanta Falcons back in the
early 2000s. Although Trent Dilfer is a Super Bowl-winning quarterback, some
view his overall legacy as being more a ‘game manager’ as Smith put it.

Player comparisons from Smith often require an extra bit of
thought or separate research to understand. This ‘Smith-ism’ gave Cougar fans a
new perspective on Bonton’s importance to the team.

Smith took a jab at the Vandals during his press conference
on the same week that Washington was visiting Pullman for the first game of
this season’s Apple Cup series.

Some devoted Cougar and Vandal fans may criticize this
‘Smith-ism’ and assume Smith’s misunderstanding on the 126-year long rivalry.
But this response showed that Smith had his sights set on taking down the
Huskies this year, more so than the Vandals.

5 – “It’s really
important for us as a program – to prepare yourself for the post-season no
matter what. The season gets long, the stars will shine this time of year, and
our star needs to be our team.”

Not nearly as peculiar as some other ‘Smith-isms’ on this
list, but this quote stuck out to. Smith’s somewhat philosophical outlook on
post-season basketball perfectly describes how close he has grown towards WSU.

He referred to the best teams in the conference as the
‘stars’ that will shine this time of year and then equipped that analogy to the
Cougars’ team chemistry as their own star. Smith showed here that he wants to
ascend and descend in the Pac-12 standings as a team, not as individuals.

4 – “Analytically in practice, he was our top guy. I said, ‘That guy gets some extra rope to try and figure it out.’”

Smith and his staff recruited Bonton this season to be a
second scoring option for the Cougars alongside Elleby. Bonton led his junior
college team in scoring last year, so Smith had faith in Bonton’s ability to
score out the gate.

This ‘Smith-ism’ showed that Smith wanted to give Bonton as
much of a chance as possible to help propel the WSU offense. Though, it is not
clear what the rope is being used for in this analogy.

3 – “He’s the most
famous [Cougar] right now. Our guys are really tickled and want to please him.”

Klay Thompson returned to Pullman this year for his jersey
retirement, but also made it a necessity to visit with the current men’s
basketball team. Smith made arrangements with the team’s practice schedule to
make this visit happen.

On Smith’s weekly Zeppoz coach show, he said this
‘Smith-ism’ to emphasize how excited the program was about having Klay back in
Pullman. It seems that one of Smith’s favorite verbs is ‘tickled’ as this is
not the only time he has used this word to explain excitement.

2 – “He knows he is
going to get the kitchen sink thrown at him.”

When Smith was asked about Elleby’s importance as the team’s
prime scorer when facing the Vandals in December, this was his response.

It’s fair to say that Elleby has had the ‘kitchen sink
thrown at him’ all season. The Cougars leading scorer this season has been a
focal point for every defense that WSU has faced this year, and Smith could not
have said it any better.

WSU men’s basketball did something that the football program
has not been able to do for the past seven years, win the Apple Cup. The
Cougars swept the Huskies to win out the Apple Cup series this season and Smith
had the right mentality before the first game of the series even tipped off.

Smith illustrated WSU as the superior agricultural school in
comparison to UW and iterated that this series was all about the apples. Smith
led the Cougars this season and owned the apples.