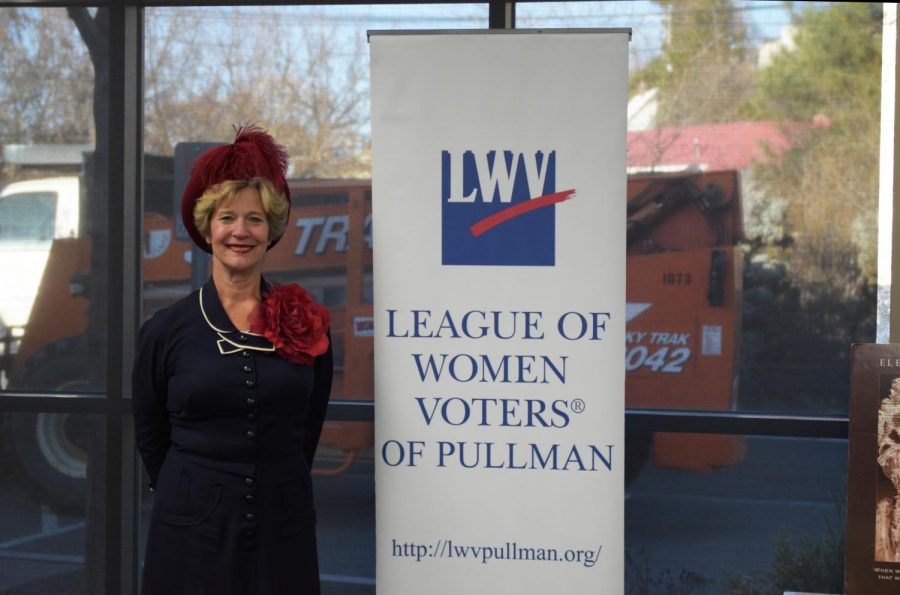 Cathryn Cummings poses in front of the Neill Public Library Thursday before her presentation.

Neill Public Library hosted a special guest of honor: Eleanor Roosevelt, or at least the reenactment of her.

Cathryn Cummings’ reenactment of “Women of Strength and Courage ” is a first-person biographical presentation from the perspective of Roosevelt, former first lady of the United States. Her presentation celebrates the 100th anniversary of the passing of the 19th amendment, ensuring the right to vote for many women.

“I wasn’t going to be that first lady who everyone had to wait on,” Cummings said. “They tried to stop me but I said no, this is the role I want.”

Cummings is a nationally recognized speaker known for her theatrical storytelling, according to the City of Pullman. She has spoken in TED Talks and has created a one-woman show which tells the stories of five women in history, including Roosevelt, Helen Keller, Harriet Tubman, Sojourner Truth and Florence Nightingale

“None of those women have been given justice as to what they did to change the world,” she said. “Especially the two women of color.”

She addressed the Pullman League of Women Voters and community members while wearing a historical dress with a large red flower and hat to capture Roosevelt’s attire.

Cummings told the life story of Roosevelt from a first-person perspective. This started with Roosevelt’s child life, then moved on to meeting Franklin Delano Roosevelt, becoming first lady, FDR’s affair and death, and finally her time serving on the United Nations.

“I would serve my country as first lady in spite of some of the hurt that was caused for me,” she said. “I did my duty. I went where his legs would not take him.”

She described the impact Roosevelt had for the United States, who said she was the driving force behind much of the country’s actions to help citizens during The Great Depression.

“I have a vision of who I think Eleanor was,” she said. “Badass is what she was … you know, in nice clothing.”

Cummings said she hopes her story of Roosevelt gives people inspiration and empowerment to engage in beneficial ways for their communities. She asked that anybody who visits the FDR memorial in Washington D.C. to tell the statue of Roosevelt what they will do to make a difference.

Her story drew many laughs and wide smiles from an attentive audience who asked more biographical questions after the presentation of Roosevelt’s life.

Uta Hutnak, Pullman resident, said she enjoyed the presentation even though she knew Roosevelt’s story.

“Getting the story again was affirming that she was the driving force behind President Roosevelt,” Hutnak said.

Cummings said she came up with the idea to tell Roosevelt’s story from a first-person narrative after taking a class at Whitworth University, where a professor taught through theatrical performances.

“I needed some inspiration in my life and these five women are my role models,” she said.

Cummings also performed at Lincoln Middle School and Colfax High School earlier on Thursday. She said she enjoyed seeing all the students in the audience engaged with the story and asking questions about Roosevelt.

The event was also hosted by the League of Women Voters of Pullman. It was supported with funds from the Washington State Historical Society.