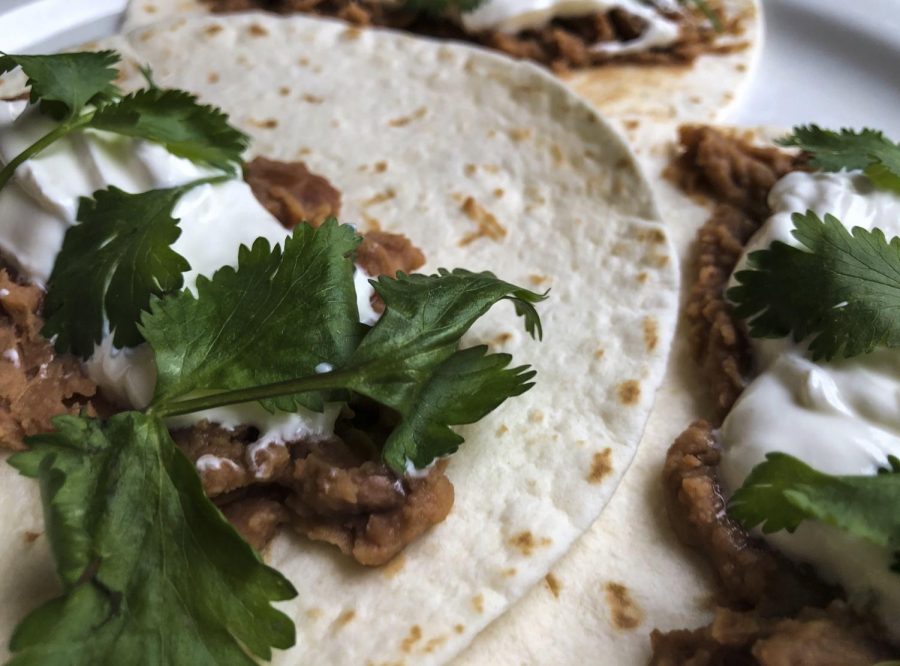 Bean tacos with fresh cheese are the easiest to make out of these recipes. Bonus: they're vegetarian.

A few days ago Twitter king Jaboukie Young-White started a thread asking for his followers’ favorite struggle/comfort meals. (If the hyperlink to the thread doesn’t work, wait a couple days. He’s probably just suspended for impersonating CNN again.) He received a lot of replies with recipes that are quick, easy and delicious.

Because I’m back home, I decided to ask my family for their favorite comfort foods growing up. My mom and I made two recipes from our family and one from the Twitter thread.

Kielbasa and Stewed Tomatoes on Toast

Kielbasa (about half of the U-shape)1 can of stewed tomatoesParsleyGarlic powderBasil1 slice of toast, buttered

Portion the amount of kielbasa you plan to eat. The typical ratio is one can of stewed tomatoes to half a U-shaped kielbasa, but you can do more or less it doesn’t matter. Cut the section you chose into thin slices, no thicker than half an inch.On medium heat, cook the kielbasa slices until they’re brown on both sides.Open the can of stewed tomatoes and empty it into the pan. It’s recommended you add an ounce or two of water to the can then into the pan to empty the can and thin the mixture, but, again, that’s a personal preference.Turn the heat down to low and add in the parsley, garlic powder and basil. There’s no set amount to add; it’s all to taste. My family goes overboard with it but if that’s not your style, you don’t have to.Stir the mixture and cover it with a lid. Leave it to marinate. There’s no set time but I think my mom typically gives it 5-10 minutes.I prefer this over rice, but traditionally it goes over toast. The toast can be made at any point. It gets thrown in the bottom of the bowl underneath everything so warmth and crispiness don’t matter.

Hamburger Gravy (it tastes better than it sounds)

Cook the rice in a separate pot and leave it until it’s done.In a pan, thoroughly cook the meat until it’s brown, then drain.Add the full can of cream of mushroom soup, plus half a can of water.Cover and heat on a low-to-medium heat until it starts bubbling.Add basil, parsley and cayenne, to taste. Stir.Add in a half or full cup of vegetables, typically peas but my mom wanted mixed vegetables for this one.Cover again. Let it warm through on low heat, then serve.

Flour tortillas1 can of vegetarian refried beansFresh cheese (your choice)Cilantro

This one is by far the easiest to make.

Cook the refried beans, either on the stove or in the microwave. I prefer the stove but I don’t think it makes a difference.Warm the tortilla on the stove, if you like.Spread the beans on the tortillas, top with cheese and garnish with cilantro.

All of these recipes are quick and easy to make, and will last a couple days in the fridge as leftovers if you make too much. My mom and I made these all at the same time using all four burners of the stove. From prep to plate, the whole ordeal took maybe 40 minutes. If life seems a little stressful, this is a good way to take your mind off it for a while.

Twitter recipe honorable mentions (because I didn’t have time to make them all):

Soy sauce-fried eggs over rice – @jackiehluo (she posts a lot of cool recipes on her Twitter)Red beans and rice, smothered smoked sausage and potatoes or pastalaya (jambalaya but substitute pasta for rice) – @pensivethotRefried black beans with flour tortillas lightly charred on the gas burner. Onion powder, garlic, paprika and cumin mixed in. Stir in some crema when it’s done cooking and put it on the tortillas – @EvilAlienReplicPasta a ceci: saute a couple cloves of garlic and a few bay leaves in some olive oil, add crushed tomato and a can of garbanzo beans (chickpeas). Boil a half-pound of egg noodle pasta, drain, add to the beans/tomatoes and serve – @mpmemequeenFrench onion soup but add potatoes. You can make it meat-free by using vegetable broth and a splash of (vegan) Worcestershire sauce – @mccakela (she includes a thread on how exactly to make it)