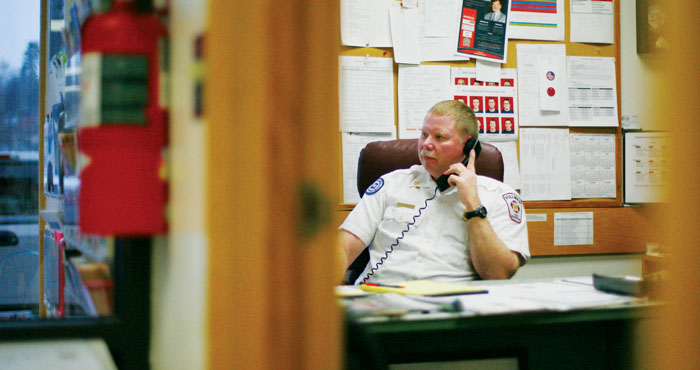 Pullman Fire, Pullman Police and WSU Police are practicing new protocols and following guidelines that include social distancing to prevent the spread of COVID-19.

Dispatchers are asking 911 callers specific questions to help firefighters determine what personal protective equipment is necessary. Heston said it is important for callers to identify potential symptoms and exposures so firefighters know what to expect.

Heston said wearing personal protective equipment is not something new for firefighters and paramedics.

“As the community gets worse and there are more cases in the community, we’ll up our precautions,” Heston said.

All fire stations are closed to the public and firefighters are maintaining a six foot social distance within the stations whenever possible, he said. They are also using teleconferencing for meetings when possible.

“We don’t get a choice,” Heston said. “Our job is to respond to these individuals.”

Heston said the department has a place to quarantine exposed firefighters so they do not put their families and other firefighters at risk.

The department does not have a lot of personal protective equipment and is asking for donations of gloves and N95 masks from the public. Heston said he expects they will run out at some point because Pullman is a small city and is not a priority to the state government yet.

“We just are seeing the tip of the iceberg right now,” Heston said. “We’re just kind of gearing up.”

Pullman Police Chief Gary Jenkins said officers are doing everything that is recommended for the public to keep themselves healthy, including frequent handwashing and social distancing.

Officers will perform life-saving measures when needed but they are limiting other contact with individuals, Jenkins said.

“We’re trying to be very prudent and judicious about when we have to make an arrest,” Jenkins said.

Officers will wear gloves during arrests and note physical symptoms of the person being arrested, he said.

The department is avoiding two-person patrols in order to maintain social distance between officers, Jenkins said.

The station is now closed for in-person business, according to a tweet from the department.

“There’s always the potential they have been exposed and we just don’t know it,” Jenkins said.

Pullman police will continue educating the public about Gov. Jay Inslee’s proclamations and the best ways to stay safe during this time, Jenkins said.

Officers are taking extra steps to protect themselves and the public on medical calls, said WSU Police Capt. Mike Larsen. This includes cleaning their vehicles and equipment, handling calls over the phone when possible and wearing personal protective equipment such as filter masks.

“We’re still out on patrol and we’re still out there making sure everybody is trying to stay safe,” Larsen said. “If you need us or medical, pick up the phone and call. We’ll be there.”

Larsen said he does not know of any WSUPD officers who have had to respond to cases of COVID-19.