Q is known for her resilience; art features cats, contemplation 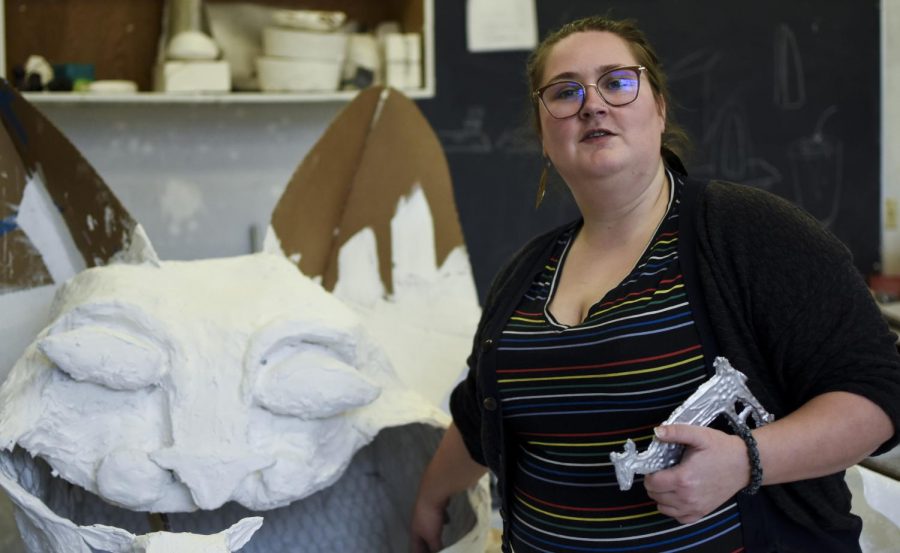 Q, master of fine arts student, said her artwork is funny but sad. She wants viewers to contemplate where they came from and where they are now.

Ashley Quast, known as “Q,” said her art is a balance
between whimsy and failed expectation — and her Master of Fine Arts thesis
presentation is an example of just that.

Q, who will graduate
in May with a Master of Fine Arts from WSU, has been studying here for two
years. Since completing her Bachelor of Fine Arts, Q said she has learned to
trust her own hand to produce her art.

Her art reflects on
where a person is now and where they have come from, she said. Q hopes viewers
will be confronted with versions of their past self and think about what
happened in between.

Q said her art is both
funny and sad. She creates many animals, most often cats.

“I just let my mind go
wild and I don’t censor myself,” Q said.

In order to complete
her degree, Q designed a thesis presentation that included a giant cat head and
other various animal creations.

Q said she planned to
perform alongside the pieces and activate bell sounds and various objects with
her movement. At the end of the performance, Q would remove the head of a deer
she made, place it on her own head and emerge as a different being.

Her work is tamer than
she would like, she said.

“Sometimes I wish I
was more interesting,” Q said, “but I’ll get there someday.”

All the students in the MFA program, including Q, were, until recently, planning to showcase their work at the Jordan Schnitzer Museum of Art during the spring semester.

Then COVID-19 hit
Washington. Following the new social distancing regulations put in place to
prevent the spread of the virus, the museum closed. Q said she had to re-think
her thesis.

So, Q adjusted. She
planned to take some of her created objects and travel to people’s homes, where
she would perform in costume outside their front windows. The performances
would all be by invitation or request.

“It’s like having a
window to another world that you can enter into for a period of time,” Q said.

Q performed outside
houses for a few days before  Gov. Jay Inslee’s stay at home order, Q
said. She was only able to perform outside a few houses. She has been making
sure to frequently wash her hands, even though she does not have contact with
humans or surfaces during her performance.

Her last performances
are on Thursday. Q said she has to complete her performances in order to finish
her thesis and receive her degree.

Hallie Meredith, clinical assistant professor in the Department of Fine Arts, has worked with Q since her first semester at WSU. Meredith said Q is resilient and this is not the first time she has had to adapt an event because of uncontrollable circumstances.

“She does not give
up,” Meredith said. “Whatever form [this performance will] take is not clear,
but she will do it and it will be very successful.”