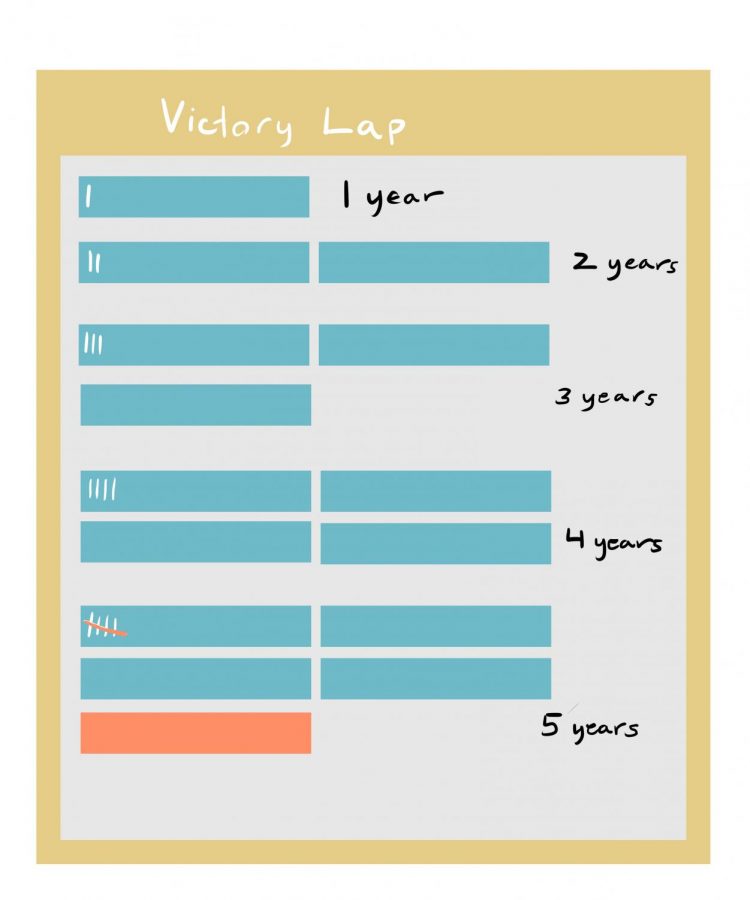 If you need to, take time off from school and then come back to it

An academic “victory lap” is the term used to describe the situation where a collegiate student takes additional terms of study beyond the typical four years that undergraduates spend at university.

This action often is met with negative sentiments and students that take additional terms are often seen as having made academic errors that cause them to spend this extra time in school. However, in reality taking a victory lap is a situation unique to each individual’s college experience and can be a result of multiple factors.

“I think people receive criticism because four years is what’s traditional [for] college, anything outside of that, people don’t understand and it’s a lot easier to make fun of people taking an extra lap than understanding why they would be,” said Emily Henspeter, a junior digital technology and culture major.

Secondary education is a process unique to each individual who experiences it. All majors are not made equally and college is also a time when students must learn how to individually manage their own lives, in all aspects. Therefore, some students end up taking more than four years to completely fulfill the requirements of their secondary education. However, those who take additional years of study are often met with scrutiny and negative sentiments, often being discriminately regarded as ‘fifth-years.’ This is due to the influence of the traditional view that college should last four years.

“A negative judgement of going into the victory lap would
just be that [the student’s] priorities aren’t in check; that they’re just
wasting money,” said John Brown, a junior architecture major.

Brown himself is aware that he will have to take an additional two years of study on top of his traditional four years being a transfer student.

“I mean technically, I’m taking two victory laps, but y’know I’ve got a goal in mind and I’m trying to get there, so I’m just taking the path that I know to get to that goal,” Brown said.

Some students also end up taking additional years of study after taking a temporary break, or ‘gap-semester’ in the middle of their undergraduate study. This can be due to a variety of factors whether they are financial, academic or personal.

“Some people are just different and either that was their plan, or it has something to do with their major, or just like other outside circumstances that make them stay here for an extra year,” said Taylor Rouse, a junior criminal justice major.

WSU offers a variety of majors, each with their own specific certification and credit requirements. Depending on a student’s major, they may or may not have to fulfill more than four years, or eight semesters of study, from the beginning of their college academic career. Therefore, a student may become a ‘fifth-year’ regardless of their own choices or circumstances.

Taking additional years of study at the university level can bring certain benefits to students, rather than simply costing additional amounts of money.

“Extra schooling like if you wanna pick up another major [or] another minor,” Rouse said. “It can form connections in the outside world if you start working closely with certain professors [which] can lead you in a direction that can help you in your career.”

Extra terms spent at university do indeed provide more options with professor interaction, campus involvement and also part-time work opportunities. If students use an extra term to strengthen their professional connections, earn extra money and improve their GPA by performing well in classes, this extra time can actually make them a better qualified candidate for whichever career or program that they intend to take their next step into.

In reality, when it comes to a university education, each student is on their own individual journey within a program of their own choosing. With such a dynamic variety of majors offered at WSU, the traditional opinion that college should last only four years is no longer practical or relevant.