Event would have been from April 30 to May 4; last chance for four seniors to compete 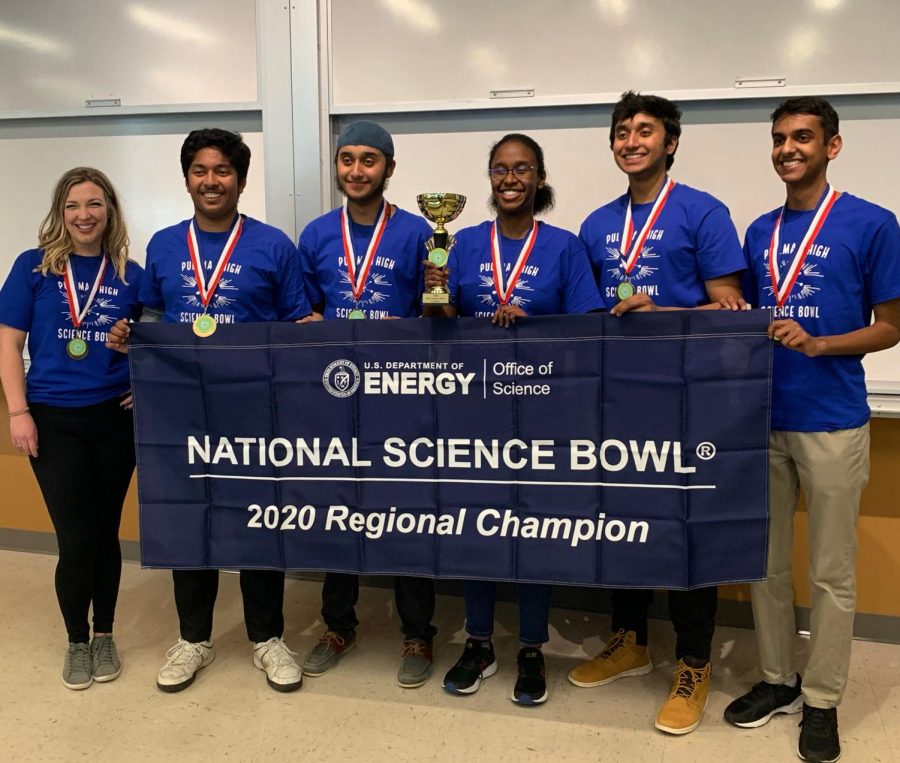 Members of Pullman's National Science Bowl stand behind a banner. The competition was canceled due to COVID-19.

When the Pullman High School Science team qualified for the National Science Bowl, they were filled with confidence and a desire to break into the top 16. They never expected the competition would end up being canceled.

Following the outbreak of COVID-19 in the United States, the National Science Bowl was canceled.

This would have been the third time in Pullman history that both the Lincoln Middle School and Pullman High School teams would have competed, and the high school team’s fourth consecutive year of going to nationals.

The team’s coach Johanna Brown said she sees the cancellation as a big loss for her and the students.

“It is definitely something I have had to think a lot about,” Brown said. “We had one of the best teams we have ever had and I’m sad for the students not getting to have this experience they worked for four years to get to.”

She said 65 to 70 teams compete in the science bowl each year. Before the event was canceled, the team said they were focusing their practices on increasing the speed of their answers and hitting the buzzer.

“We are one of the only public and non-STEM schools that actually go,” she said. “A lot of those schools are either private or they have some sort of magnet program in a large city that takes the best STEM students from around the area.”

Shohom Bose-Bandyopadhyay, senior and co-captain of the team, said the cancellation of the Science Bowl is worse for him than missing out on prom and graduation.

“I spent a lot of time preparing for it,” Bose-Bandyopadhyay said. “I was really looking forward to going with my younger brother. It is a big loss for me, but it is happening to a lot of people right now.”

Bose-Bandyopadhyay said the competition consists of answering 23 questions within a specific time frame. In order to win, a team must answer more questions correctly than the opposition. The questions range from mathematics to earth and space sciences.

Melody Gebremedhin, a senior on the team, said she was disappointed by the cancellation but she does not take it personally as a lot of events have also been canceled.

She said she had been working on getting faster at doing math calculations.

“I have to get faster at doing these calculations,” she said before finding out about the cancellation. “It would be a shame if I know the formula but can’t answer it because I haven’t calculated in time.”

Bose-Bandyopadhyay said he was sad he did not get to compete with his brother, who is the captain of the Lincoln Middle School team, before he graduates.

“For me it’s just awesome,” he said before finding out about the cancellation. “We always wanted to do this as brothers. We wanted to go to nationals together, so that’s a special feeling.”

The National Science Bowl is one of the nation’s largest science competitions. More than 14,700 students compete each year. The competition was set to begin on April 30 and end on May 4.

All five members: four seniors and one junior, have been on the science team for the past five years and many joined as early as the sixth grade. This would have been the last opportunity for the four seniors to compete.