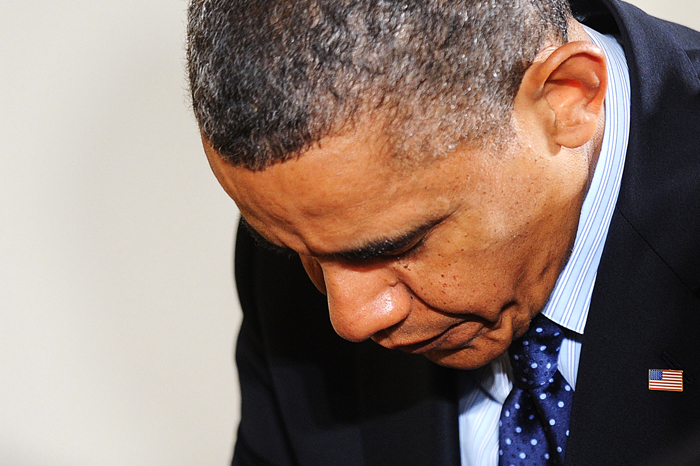 President Obama bows his head in prayer during the Easter prayer breakfast Apr. 5 at the White House.

Prayer should be permissible before any government meeting, yet Christianity is attacked constantly by the media.

Arguments before the Supreme Court Wednesday wrestled with the issue of whether prayer before a local government meeting is constitutional. Linda Stephens and Susan Galloway sued Greece, N.Y. officials because monthly government sessions opened with prayers that are “overwhelmingly Christian in nature,” according to CNN. Although the prayers were a long-held tradition in the town, a federal appeals court found the practice in violation of the Establishment Clause.

The separation of church and state is really fundamental. As long as the prayer isn’t of a coercive nature, and not during a meeting, it should be perfectly acceptable for people of a common faith to pray before a local government meeting, and especially if it is of majority interest. Legislative prayer is not a new idea in the government and should be accepted at a localized level, the same way it is accepted in the Capitol. Furthermore it is important to consider the way Christianity is negatively portrayed and covered by the media.

The suburb of Greece has held the tradition since 1999, according to CNN. The majority of people wanted to pray because Greece is a predominately Catholic town, according to PBS.

To open up with prayer for guidance before making government decisions is a personal choice, and honestly more policy makers should look for direction from their individual beliefs. No one was coerced to pray, but there just happened to be a group of people with a common faith that attended these meetings.

The openings were not exclusive to Christianity either. Town Supervisor John Auberger allowed all religions an equal opportunity to express their faith before a meeting. “We believe in….diversity to be able to pray, to say the prayer in a manner that that individual decides,” Auberger told PBS.

Douglas Laycock, who represented Galloway and Stephens went before the Supreme Court and argued that the prayers were sectarian because they were “prayers to the almighty” and the “creator.”

Arguably, this could be up for interpretation in many different faiths. Regardless, no one was forced to pray, and someone so offended by it can just wait and respect that the religion is of the majority interest of the people in the meeting. Minority opinion shouldn’t rule what the majority of people want.

There is a precedent regarding legislative prayers, particularly in the Capitol. “The history of this country from its very foundations and founding, recognize the propriety of legislative prayer,” Thomas G. Hungar, the lawyer for Greece, said during the Supreme Court case.

Both houses have an elected Chaplain that opens proceedings with prayer and provides pastoral counseling. “It makes no sense to suggest that a prayer at the local level is more dangerous for Establishment Clause purposes than what Congress is doing,” according to Town of Greece, N.Y. v. Galloway.

Religious themes go beyond legislative prayers. The Supreme Court opens its sessions with the invocation, “God save the United States.” There is the National Prayer Breakfast that Congress hosts each February. Obviously, it’s on our money, and it’s in the Pledge of Allegiance too. This God phenomenon is not rare.

However, it seems progressive people get upset when a religious tradition, which has its roots in Christianity, approaches the fringes of government. The majority of legislative prayers are of Christian faith, not because it is better than another, but because it is more common and deeply rooted in America’s story. As of 2011, the Chaplain for both houses can be of any faith. However, Christianity is the most common, so naturally it will be seen more often.

According to Gallup, 77 percent of Americans identify with some branch of Christianity.

With the majority of people of the population identifying with Christianity, there’s bound to be a handful of people that cause stereotypes. The media should be held accountable when it comes to common distaste for people that represent a Christian faith. It is perfectly reasonable to say that there is a media bias against it, which is why the prayer before the meeting caught such negative attention. The media largely undermine Christianity because it is generally associated with more conservative views on political issues, and these views tend not to be mainstream. It seems like Christianity is covered in the media only when it stands against change or if some crazy extremist acts out.

Extreme cases covered by the media include Scott Roeder, the man that shot a Kansas abortion provider, Dr. George Tiller, in 2009. Obviously the guy is completely insane, but the media were not shy about linking Roeder to Christianity. Roeder tried to justify the murder by quoting the bible, according to CNN.

Professor Thomas Schirrmacher, the director for the International Institute for Religious Freedom of the World Evangelical Alliance, wrote, “According to the most recent surveys, 51 percent of Americans oppose abortion. That is to say, 120 million peacefully oppose it, and one does not. Yet this is sufficient for the press to ‘toss’ them all into the same pot.”

Freedom of religion is a precious right Americans hold, and it is important to avoid a theocracy and rule by divine right. However, it should be permissible to pray before a government meeting as long as it’s not of a coercive nature. The only reason this is an issue is because people buy into the media’s damning portrayal of Christians.

-Alyssa Reynolds is a senior communication major from Ferndale. She can be contacted at 335-2290 or by opinion@dailyevergreen.com. The opinions expressed in this Column are not necessarily those of the staff of The Daily Evergreen or those of Student Publications.