Passengers encouraged to keep their distance from driver, other riders 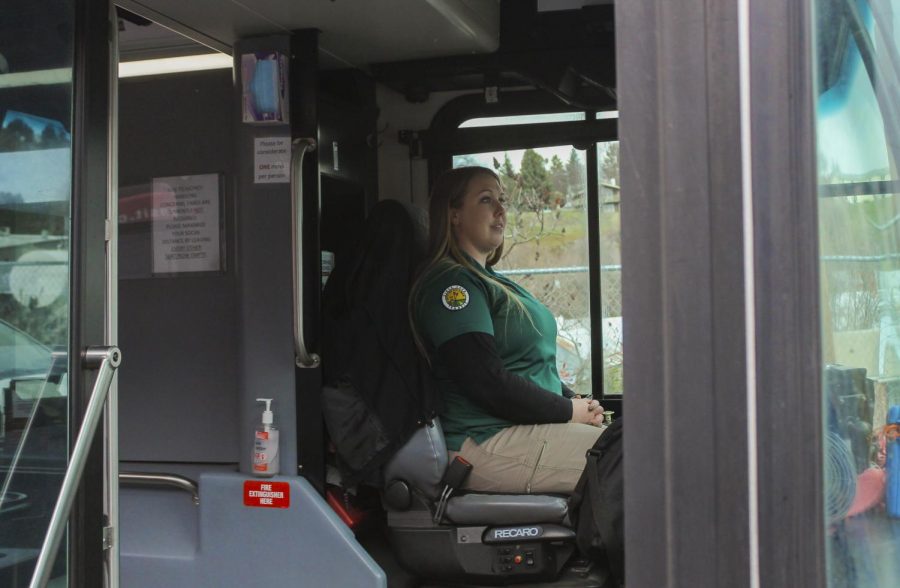 Pullman Transit driver Tabitha Ries is a part of the bus washing crew and is required to scrub everything in the bus from the walls to the ceilings. “It was really an intense five-hour shift for sure because there’s a lot of scrubbing," Ries said.

The Coug B Express route is usually full in the morning.

On March 23, Tabitha Ries, Pullman Transit driver, only had a total of 36 passengers during her eight-hour shift.

As the number of public transit passengers decrease over time, drivers like Ries felt a shift in their usual routine. Pullman Transit implemented changes to its day-to-day services to comply with the state’s goal of preventing the spread of COVID-19.

Pullman Transit manager Wayne Thompson said they are no longer asking patrons for bus fares or CougarCards in the meantime to minimize extensive interaction between the riders and the drivers.

Buses now have a white line on the floor — in front of the wheelchair area — to indicate the six foot mark between the driver’s seat and the patrons, Thompson said. They have been offering masks and sanitizers on the buses since 2018.

“We restock those and have been keeping up with the supply and demand to date,” he said. “I think masks will get harder to provide.”

The seats on the wheelchair area of the bus are folded up to discourage passengers from sitting too close to the driver, Thompson said. The buses also have signs asking people to spread out and keep their distance.

Pullman Transit is using three older buses for Express routes, he said, which allows passengers to board and depart from the rear end of the bus without having to walk past the driver.

Although Pullman Transit adjusted its routes until May, Thompson said they added additional shifts for drivers to make up for hours they had to cut. Additional shifts include jobs like sanitizing and washing buses on a daily basis.

“With the additional employees assigned to bus washing and sanitizing, we’ve been able to stay on track,” he said. “Plus, it’s allowed us to apply hospital-grade disinfectant called Birex every day to every bus.”

Ries said when they wash a bus, they first have to scrub everything down with Simple Green to get all of the dust. Afterward, they would apply Birex to disinfect surfaces.

“I mean, anything and everything that people touch from the walls and ceilings inside every single bus got scrubbed out,” she said. “It was really an intense five-hour shift for sure because there’s a lot of scrubbing.”

Thompson said they noticed a decline in their Dial-A-Ride program, a transportation service for patrons who are unable to ride the bus or are at least 65 years old. They typically transport about 100 passengers per day, but now they are only carrying 20 passengers per day.

Due to the lack of Dial-A-Ride passengers, he said the full-time drivers assigned to that program are helping with sanitizing buses instead. The drivers also helped deliver materials from the Neill Public Library when the book delivery service was still running.

Thompson said they are in contact with the Meals on Wheels program, which is under the Pullman Community Council on Aging, in case they need assistance.

“One of our big focuses has been on maintaining hours for the employees,” he said.

Ries, who also has children, said she had lost about 18 hours last week. She said she does not mind the bus washing job as long as she gets the most hours she can.

“It’s kind of been really, really stressful trying to figure out how it’s going to work,” she said. “[If] I’m gonna be able to make it through and pay the bills on time and, you know, trying to figure all that out.”