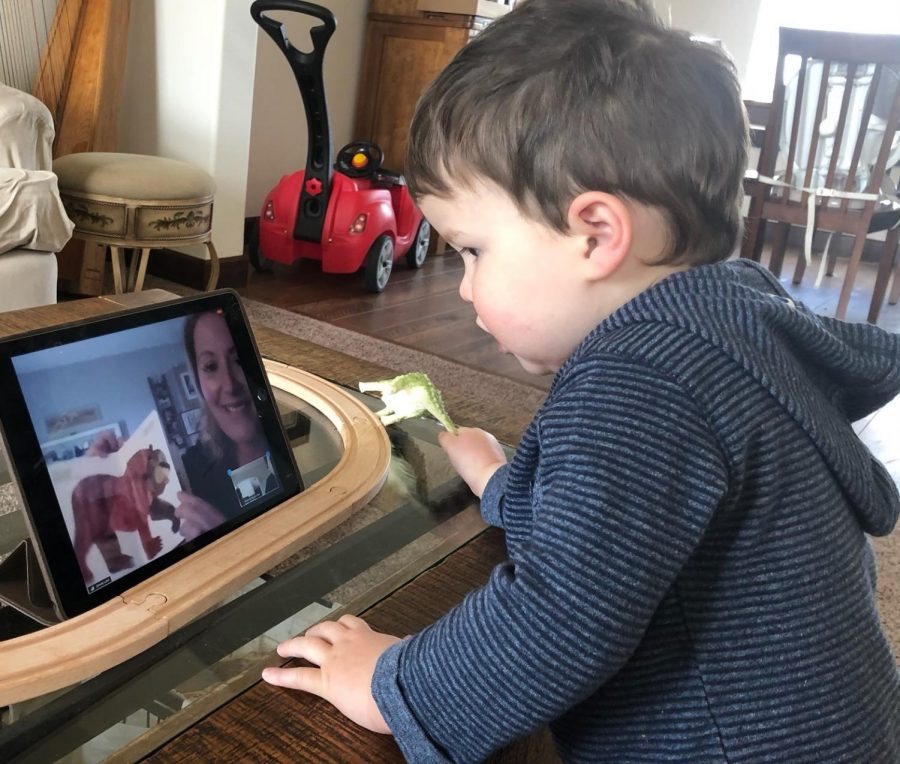 Sage, a toddler who attends WSU's Children Center, is listening to his teacher Jonnie read a book over Zoom.

When the kids in Michael Chapman’s class at the WSU Children’s Center were told they would no longer be meeting in person anymore, they all had one question. What was going to happen to their pet rat Maxine?

Chapman, Children’s Center assistant director, said he answered their concerns by having Maxine introduce the book he would read aloud to them on Zoom.

“I don’t think the kids honestly paid attention to me at all, they were just looking at the rat,” he said. “I don’t take it personal, I guess I’m second fiddle to a rat.”

Despite not being able to have classes in person, the center is hosting Zoom sessions to support the children and their parents, Director Heather Dermott-Havey said.

“It’s really keeping that social connectedness that’s so important to children,” she said. “For children, it didn’t make sense. ‘One day all my friends are here and then one day they’re not and I’m stuck with my parents.’”

Teachers will leave mics open for children so they can interact and talk to their friends in class during Zoom meetings, she said.

“At first, one of the parents made a comment like ‘How do I mute this?’” she said. “But then they saw such sheer delight of their child seeing their friends and wanting to respond.”

Attendance started to drop in the weeks leading to Gov. Inslee’s social distancing order, she said. During that time, staff focused on teaching their classes healthy practices such as handwashing techniques.

Similar to WSU courses taking place over Zoom, staff at the center are finding ways to engage with children online, Chapman said. YouTube videos, Zoom meetings and shared OneDrive documents have been his way to engage with his class and their parents.

Havey said one toddler teacher uploads videos of him walking his dog. During the video, he will pause and ask his audience, his class, what they think the dog will do.

“He’s kind of engaging the kids in everyday things and helping them understand that everybody is at home, not just them,” she said.

Parents have been supportive and engaged with staff, she said. Teachers will send parents resources about child development and some parents with infants have sent videos to staff of their children taking their first steps or saying their first words.

Chapman said he has received touching comments from the parents of the children he teaches. Parents have sent him reactions of their children watching his videos.

“One young lady [toddler age] was touching this huge computer screen,” he said. “She’s running around the room thinking that I’m right there with her … In her world, I just showed up in her living room.”

Havey said being honest about COVID-19 is the best way to maintain trust with the children they interact with.

“We have to just answer kids’ questions as they come up and it’s okay to say to their child ‘I don’t know, let’s find out,’” she said.