Bernardo and his bees 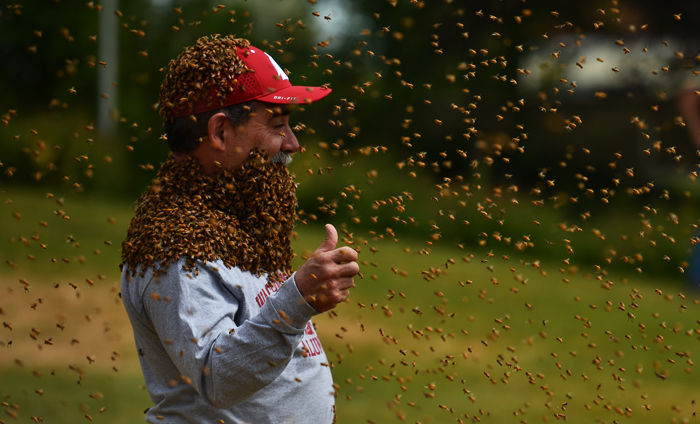 Beekeepers applied pheromones to Provost Dan Bernardo on Friday to attract bees to his face, giving him an unusual beard. The event was the start to a fundraising campaign for a new Honey Bee and Pollinator Research Facility.

Hordes of honey bees swarmed by the thousand on the front lawn of the Lewis Alumni Centre on Friday as Provost Dan Bernardo donned a beard of the insects during the kickoff for a new Honey Bee and Pollinator Research Facility.

He and Eric Olson, Washington’s largest honey bee keeper, have pledged to match donations for the facility up to $25,000 through June 30.

Bernardo tried his hand at ventriloquism as the bees crept toward his moustache. The mic he held amplified the buzz while he described the experience to the crowd.

“Let’s see, what does it feel like … it feels scratchy,” he said, “and the only fear I have is of eating one.

“Hard to talk without your lips opening,” he added.

He traced the origin of the event to the Faculty Senate night when he casually dropped by to see Steve Sheppard, chair of the department of entomology.

“I just wanted to say hi,” he said, to widespread laughter. “And Steve convinced me that this was a good idea.”

Though he was stung once after crushing a bee while giving a thumbs up, Bernardo said he would do it again.

Sheppard joined him, sporting his own bee beard.

“It’s a little bit of a tiny massage,” he said. “Other than that it’s just noisy.”

Once he had been de-bee’d, Sheppard explained the significance of honey bees to global food supplies, and particularly to Washington’s large tree fruit crop.

“About a third of our diet is dependent on insect pollinators,” he said. “They’re really critical for agriculture. Our diet would be much poorer without them.”

Beekeepers around the country lost approximately 44 percent of their colonies between April 2015 and April 2016, up about 3.5 percent from last year, according to a study funded by the U.S. Department Agriculture. The WSU bee program studies methods of preserving these colonies.

This includes research on genetics, breeding and colony health issues, Sheppard said. The $16 million facility, to be built at approximately 15,000 square feet near the Eggert Family Organic Farm, would allow for an increase in all these areas.

While honey bees are generally moved in winter to warmer regions for commercial purposes, Sheppard said the facility would feature controlled atmosphere capabilities to provide cold storage in which bees can undergo their natural wintering process, potentially reducing winter losses.

Additionally, the public would be able to view and learn about bees from a screened observation area.

Sheppard said the facility would rival the best in the U.S., and would stand out on this side of the country.

“There’s really nothing in the Northwest or even in the West that would compare to it,” he said. “This facility will allow us to kind of ramp up the level of research that we’re doing.”