Funds will go toward new crosswalks, more lighting on campus 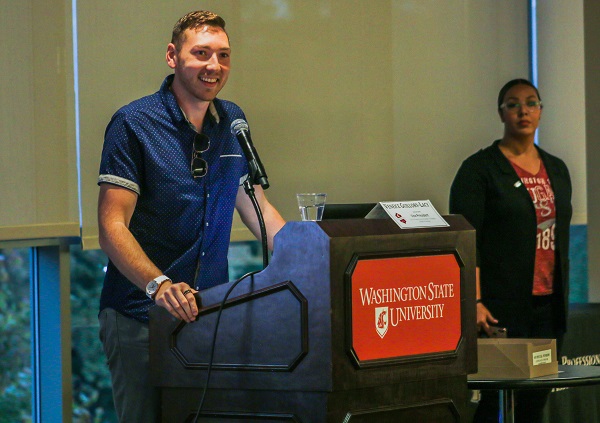 GPSA senators approved $10,000 to go toward a campus-wide safety project, as well as $5,000 for a student grocery-subsidy program on Monday night.

Matthew Sutherland, vice president of legislative affairs, said the safety project will include a blue light crosswalk at the intersection of NE Colorado Street, NE Thatuna Street and NE C Street. There will also be a blue light station on Ruby Street Park.

Contributors for the safety project are the Interfraternity Council, the Panhellenic Council, ASWSU and the City of Pullman.

Other parts of the project include putting resources in bathroom stalls and installing another crosswalk light on NE Colorado Street and NE Monroe Street.

Having resources in bathroom stalls will mean domestic violence and sexual assault survivors will be able to easily access them, Sutherland said.

The entire project is estimated to cost $50,000 in total.

During discussion about the fund, an amendment was voted on to fund $20,000 of the project, but it did not pass. GPSA will instead fund $10,000.

GPSA President Jennifer Johnson said the program requires students to follow certain steps. They must turn in an application to enter the program. Once the student is approved, they can shop and turn in their receipts for reimbursement.

Students can be reimbursed up to $25 for grocery shopping each week.

“There’s a lot of work right now on asking for funding from a variety of different other stakeholders that could contribute to this pot of money,” Sutherland said.

Johnson said the fund is in partnership with ASWSU, as well as other community organizations.

Over 200 undergraduate and graduate students have applied for this resource in one week, she said.

“If you’re not in need, maybe don’t approach it,” Johnson said. “There are students with kids who might be struggling right now.”

The duration of the program does not have a determined length yet because it is dependent on funding, he said.

A committee made of GPSA and ASWSU senators will review and approve applications. The reimbursement will go toward the student directly instead of toward outstanding fees, Johnson said.

“Coming together for this program is more effective in the long run,” Sutherland said.

Senators also approved $5,000 to go toward an emergency fund for GPSA executive members to use for future purposes in the fiscal year 2020-2021.

Some senators brought up concerns that this fund could give executive members the “power” to use it however they want, while others said they do not worry about the transparency of the leadership.

“I feel like I know the limits to my power,” Johnson said.

An approved amendment said the executive board can use the emergency funds when the senate is out of session until August. There must be a three-quarters vote from the board.

“We are not organized for this crisis,” Sutherland said. “We might have to act in a matter of hours.”