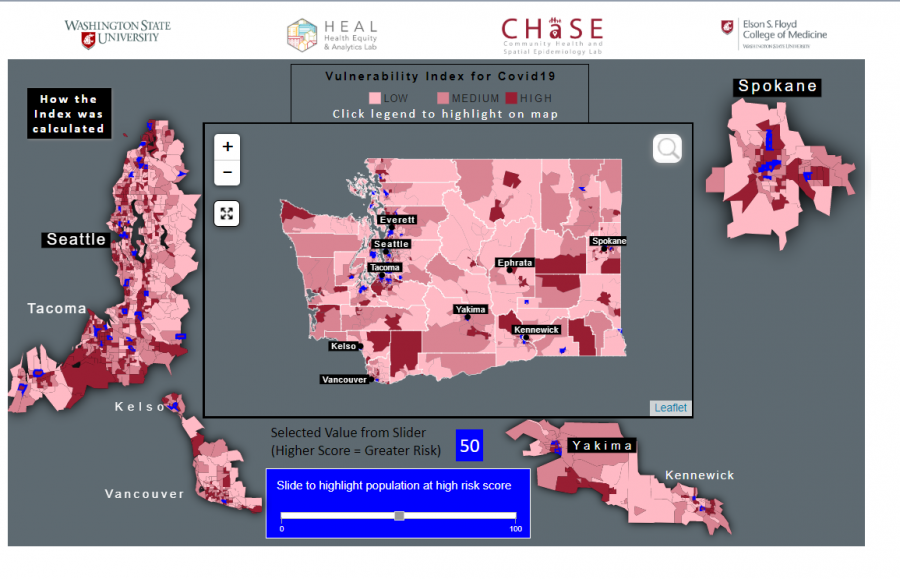 Researchers at WSU's CHaSE Lab created an interactive map that shows what areas of Washington are most vulnerable to COVID-19.

WSU researchers at the Elson S. Floyd College of Medicine in Spokane developed a vulnerability index that shows which areas in Washington state are particularly at risk for COVID-19.

Pablo Monsivais, associate professor in the WSU Department of Nutrition and Exercise Physiology and researcher in the Community Health and Spatial Epidemiology (CHaSE) lab, said the index is based on information about age demographics, population density and chronic disease in certain areas.

Looking at which parts of the state have higher concentrations of people with chronic disease and premature deaths helped researchers determine how likely a certain population is to be affected by comorbidity. Monsivais said comorbidities are other pre-existing conditions that can make a person more susceptible to contracting COVID-19 and having complications.

Monsivais said the index is composed of census tracts that are ranked according to their predicted vulnerability to the virus.

“It gives us a way of seeing the geography of vulnerability to not just getting infected, but being infected and developing further complications and even potentially dying from the infection,” Monsivais said.

A community’s vulnerability is also dependent on how many people are obeying the stay-at-home order, he said.

Monsivais said he hopes researchers will be able to use data on hospitalizations and deaths in Washington to validate or adjust the current model they have based on how the disease is actually spreading.

“Eventually the goal here is that we can use it to help decision makers know where they may need to target testing or target some healthcare services to prevent those complications,” Monsivais said.