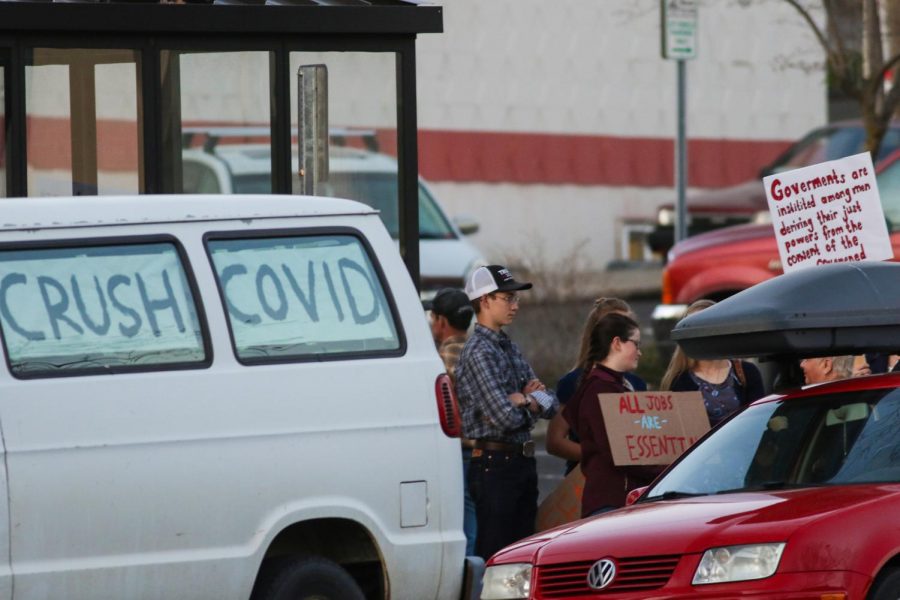 Protestors hold signs reading "ALL JOBS ARE ESSENTIAL" and "Goverments are institited among men deriving their just powers from the consent of the goverened" next to a van that reads "CRUSH COVID" outside of Moscow City Hall on Monday night.

A white van with the words “CRUSH COVID” written on its windows parked outside Moscow City Hall as part of a demonstration against Idaho’s statewide stay-home order.

Around 100 people gathered in front of the building for the “Liberate Moscow Peaceful Protest” around 6 p.m. on Monday.

Moscow Police Chief James Fry said the protest lasted for about an hour and by 7 p.m. there were only about five to 10 people still present. There were about 10 to 12 police officers present during the demonstration.

He said the police department received notice of the demonstration. The department had been monitoring the event via Facebook. There have been other demonstrations throughout Idaho and no citations, warrants or arrests were issued then, so his department followed that example, he said.

“People are frustrated that they’re out of jobs and other people are very frustrated that it’s a very serious pandemic and some are kind of in the middle,” he said. “We don’t get to pick which is right and which is wrong, we are just trying to keep the peace.”

Sandra Weeks, owner of A Heavenly Salon and Spa, said she helped organize the demonstration, but it was a last-minute decision made by a group of Moscow residents.

She said people drove to Moscow to join the demonstration from Lewiston, Coeur d’Alene and Potlatch.

Weeks joined the demonstration because her business was closed around six weeks ago due to the stay-home order shutting down non-essential businesses.

“They said we were non-essential,” she said. “Who makes up who is essential and who is not?”

Weeks said she is struggling financially because her business is closed and she did not receive a small business loan.

She said small business owners have loans and rent to pay but they have no income coming in because of their business closure. She said she cannot collect unemployment until next week, which she plans on doing if her business cannot reopen.

Weeks said there were a lot of other self-employed people at the demonstration including construction workers, tattoo parlor workers and other salon workers.

Weeks said people in the community should support salon businesses like they are supporting restaurants by order take-out. She said her business is offering gift certificates and prepaid haircuts.

If the Stay-Home order is not lifted and she is not given a real reason to not reopen again, Weeks said she might reopen her salon by Monday.

Fry said the police department would have to speak to city administration and prosecutors before deciding whether or not to take action against small business owners who reopen their businesses before the Stay-Home order lifts.

“That was part of their reason for being there,” Fry said. “They wanted the city government to open up early and get things back to as normal as possible.”

Weeks said the risk of reopening would be worth it.

“It will be food, shelter and clothing, wouldn’t it?” she said. “Come Monday, a lot of us are going to reopen regardless.”

She said salon workers can still be safe because they work one on one with customers. She said they can wear masks and gloves while working.

“When this is lifted, people will remember us,” Weeks said. “They’re going to need a haircut and they want it right away, but people don’t think about us when we need them.”

There are currently four confirmed COVID-19 cases in Latah County, according to Idaho’s Public Health website. There are 51 confirmed and probable cases in total throughout the state, according to the website.