Seeds will grow outside international space station; CubeSat will be launched in SpaceX Falcon 9 rocket 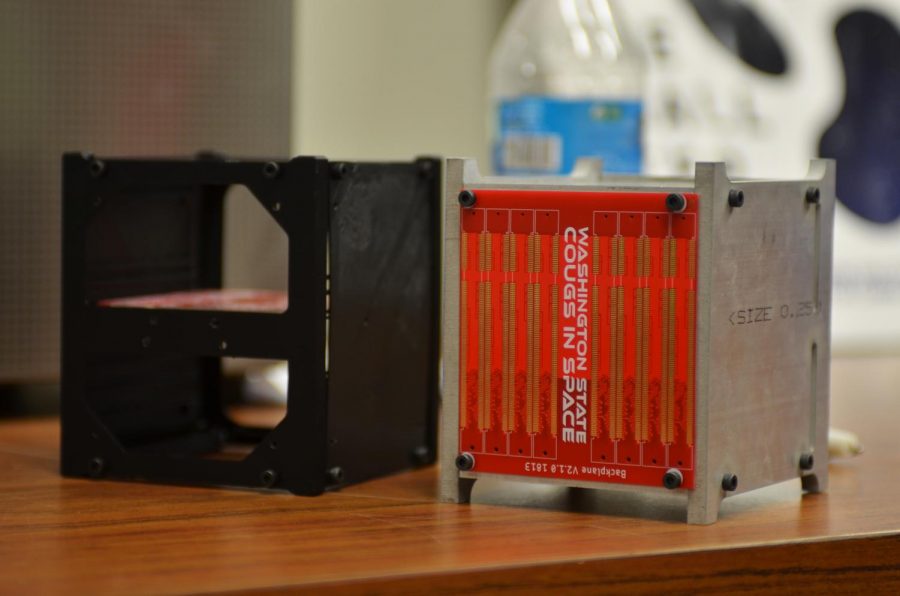 One of the designs for the nano-satellite built by the WSU Cougs in Space club on Oct. 14, 2018 in the electrical and mechanical engineering building.

Teams from Cougs in Space are working together to build a satellite that will be launched from the International Space Station by this October.

Mathew Bauer, junior computer science major and president of Cougs in Space, said the satellite is a 10-centimeter cube, or “CubeSat.” It will contain cameras to monitor conditions and pea seeds germinating, which means growing in an internal chamber.

“The germination of pea seeds, the germination of seeds in general, is something that has never really been done outside of the International Space Station,” Bauer said. “They’ve never seen how seeds react in space.”

Bauer said Cougs in Space has been building the satellite for about one and a half to two years.

Hendrik Melse, junior electrical engineering major and electrical team leader for Cougs in Space, said he makes sure all the electrical subsystems on the satellite communicate with each other.

“Space is really, really hard,” Melse said. “It’s not easy to put something into space and then talk to it on only a sixtieth of the power of a lightbulb.”

The satellite will be launched in October in a SpaceX Falcon 9 rocket, Bauer said. Club members are hoping to travel to either Virginia or Florida, which is where the launch will occur.

A company called NanoRacks will launch the CubeSat from the International Space Station, he said.

“It’s the first time this school has done anything like this,” Bauer said. “There aren’t many schools in the nation that do.”

After this project is complete, Cougs in Space will be building a 3U CubeSat, which will be three times the size of the current satellite.

Cougs in Space received grants from NASA, Boeing and other organizations to fund the satellite, Bauer said.