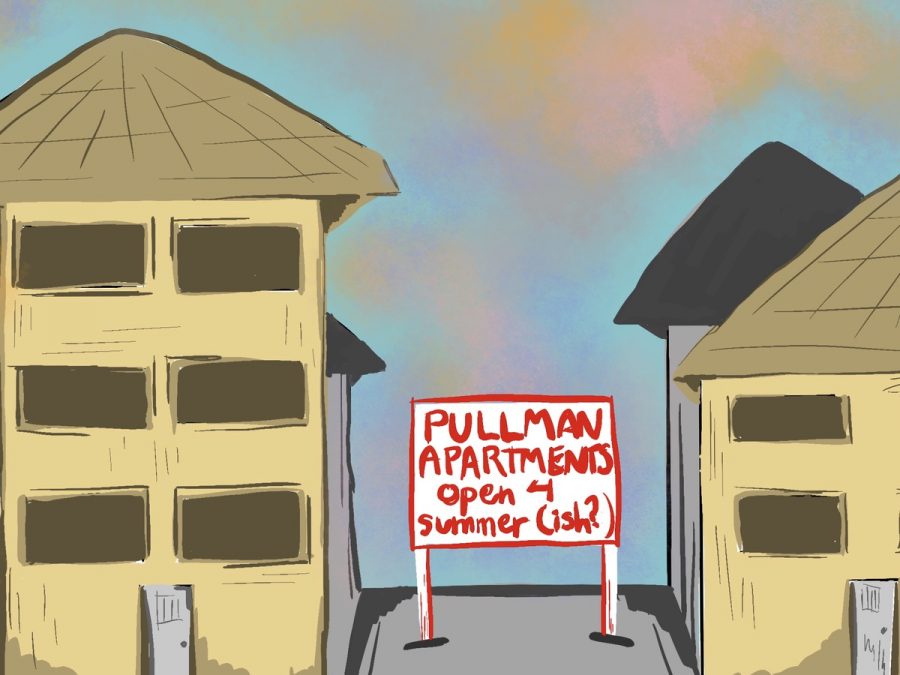 Apartment rates might go lower over the summer, but don't spend the extra money unless you have to.

Many students who had their hopes up for in-person classes to resume for Summer 2020 were disappointed when Interim Provost and Executive Vice President Bryan Slinker announced on April 3 that WSU will be using distance learning methods for classes that were meant to be taught face-to-face. While spending summer in Pullman may be worthwhile for some, in reality it would be easier to just continue distance-learning from home.

“I was planning on being in Pullman the whole summer,” said Patrick O’Neill, a sophomore finance major. “Instead, I’m spending it at home.”

O’Neill had plans to live in an apartment on College Hill and attend courses in Pullman, but had to make the tough decision to stay at home for the summer, rather than live on their own in Pullman.

This decision is certainly faced by many students who have already signed up for courses over one of the four summer session periods offered by WSU, meaning that both the sessions starting in early May, as well as those starting in late June, will be conducted through distance-learning methods.

The announcement from Slinker does note that students enrolled in summer courses are advised to maintain their campus-based enrollment and adapt to distance-learning methods. While students may want to continue their online education regardless, WSU’s campus remains shut down.

Meanwhile, with an unclear end to Washington’s “Stay Home, Stay Healthy” order, Pullman remains in a lockdown as well for the foreseeable future. These factors alone discourage student migration to Pullman, and the confirmation of online classes for the entirety of the summer show that WSU is far from ready to reopen its campus.

Classes weren’t the only campus activity affected by the spread of COVID-19, as WSU’s Alive! orientation has also experienced alterations and a potential move to an online format.

“The chance we could be doing half-online, then half in-person, was something we were talking about, there’s maybe a better chance that it’ll be all online all summer, but there’s just a bunch of variables that we’re all kind of having to adjust to.” said Alex Yano, a sophomore multimedia journalism major and orientation counselor for summer 2020.

Yano said orientation counselors were originally expected to be back in Pullman for training on May 18, and the last Alive! session was scheduled to end July 30, meaning that Yano would have spent almost his entire summer in Pullman.

Now, the OC’s are uncertain of when they’ll be back, with the schedule being for the most part up in the air, and OC’s being instructed to adapt to providing the Alive! experience through Zoom or other online methods, which presents its own obstacles.

“When you think about how WSU does orientation, it’s a lot of an experience of what college is like. You’re there for 3 days staying in a dorm room; you’ve got a random roommate,” said Yano.

These experiences will no longer be available to many students going through orientation.

The transition of Alive!, one of WSU’s primary campus activities during summer, further proves the dedication of WSU to social distancing. Along with the continued shutdown of WSU’s campus and the transition of all summer courses to online, shows that it is best for students to reconsider their plans to live, work and learn in Pullman this summer.