Pullman High School students perform on YouTube; club for songwriters in the works 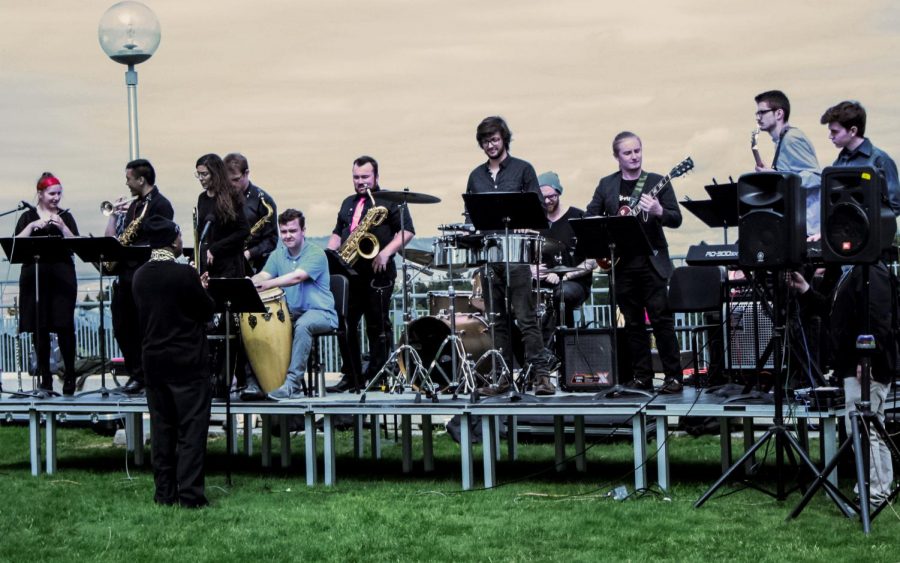 As seniors in Pullman miss in-person graduation, student musicians and their instructors are finding web-based ways of artistic expression.

Both WSU and Pullman High School pioneered paths for students to publish their musical content online. For music professor Gabriel Condon and PHS music teacher Andrew Mielke, it is important that teenage and college students still have space for creativity, songwriting and musical talent.

Condon and fellow School of Music professor Alexander Horace Young developed “Songwriters’ Roundtable” as a way for undergraduate singers — and whoever else may want to participate — to perform over Zoom conference calls. While School of Music events are often open to musical submissions from any major, Condon said the decision to open Roundtable was intentional during the global pandemic.

Senior Joel Roeber performed “Crown of Fear” for the Roundtable, a performance Condon said captured the elements of uncertainty.

“The big mantra from the teachers is ‘do no harm,’” Mielke said. “It’s just really hard when you see some kids jumping on the assignments … and then other kids, it’s like sending emails down the black hole and you really start to get worried for them.”

Pullman Public Schools has done the best they can for providing students with learning necessities, Mielke said, but he wanted to make sure musicians were also heard. So the idea of “Performances from the Porch” came to be, which involved uploading taped sessions of Mielke’s students on HoundCentral’s YouTube channel.

Music can serve as a looking glass for human beauty and representation in terrifying times, Condon said, which is partly why he believes his Songwriters’ Roundtable was so successful.

In the fall, Condon said he will advise a songwriters’ club that a few of his students will develop. Students can also enroll in MUS 496: Topics in Music this fall to learn more about songwriting techniques.

An 18-year-old PHS student and performer, Peter Smith, said Pullman High School’s public “Performances from the Porch” videos have been highly cathartic for young adults missing out on the small moments of high school.

“The sad thing is not playing with the same groups of people I’ve played with for the last two years,” said Smith, who plans to study either English or history in Portland, Oregon. “The last time I had choir … I was just trying to get home because it was a three-day weekend and the last period of the day, you know?”

For his patio performance, Smith chose “Sure Don’t Miss You” by The Dip, an indie-rock piece he decided on because of his love for the band.

Asha Campbell, an 18-year-old PHS senior, said uploading to YouTube and performing on public platforms helped her, and the community, appreciate less-recognized talents.

“I have a friend, Rebekah Welling, who did a performance on the porch, and she plays the French horn,” Campbell said, “and she’s phenomenal and so talented, but that’s not really an instrument you solo on very often, so being able to see other people’s talents and see them shine was really amazing.”

Campbell, who plays piano, guitar and ukulele, performed “Mamma Mia!” from the musical with her brother Jerome and a solo performance of “I Know a Place” by Muna from her porch.

Condon said his own Zoom platform for students to perform original songs was an outlet for both music and non-music majors to meaningfully interact.

“There’s so much talent around our university that [having students perform] was just really enriching for me,” Condon said.

Mielke, who has spent nearly two decades at PHS with plans to retire there, films the “Performances from the Porch” with the help of a PHS multimedia teacher and his wife in front of the performer’s house. Students are given 30 minutes and only two to three chances to nail it. The takes they upload to YouTube are often the first ones.

Without the social connection of in-person class, Condon said online performances can make students, and especially songwriters, closer to each other.

Condon said he recommends that performers listen to their favorite musicians if they want to learn even while following Gov. Jay Inslee’s “Stay Home, Stay Healthy” order issued more than a month ago.

Mielke said in the future he hopes to establish the “Performances on the Patio” as both a recognition to graduating seniors in his choir class as well as a goal for underclassmen and high school juniors. Condon said the Songwriters’ Roundtable would, hopefully, serve as a catalyst for future songwriters and performers to gain experience even without the in-person interactions.

“Challenge and struggle is often presented through art,” Condon said.