The Daily Evergreen • May 11, 2020 • https://dailyevergreen.com/78808/news/agriculture-company-gives-away-russet-potatoes/

Volunteers surrounded semitrailer loaded with 56,000 pounds of spuds to disperse potatoes among people 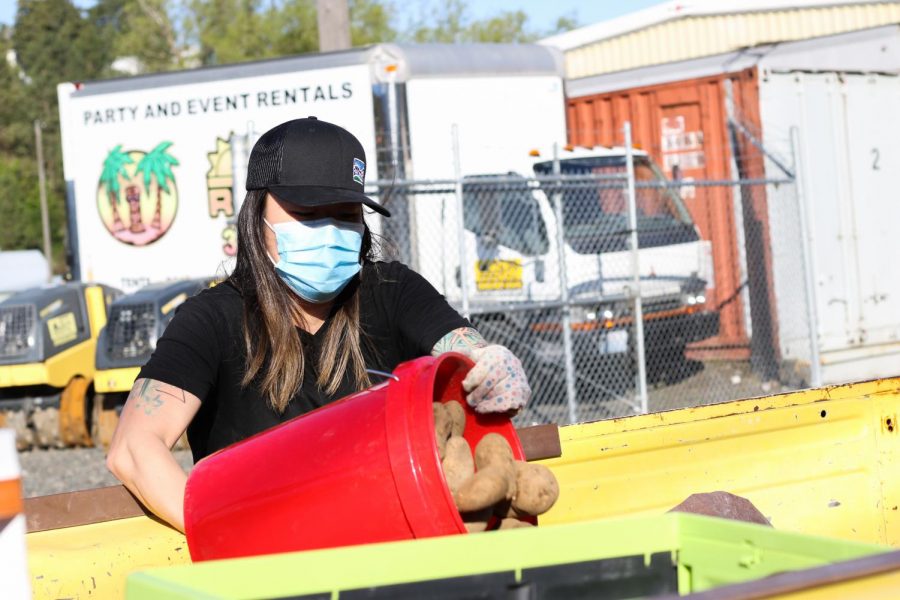 Volunteers load potatoes from a conveyor belt into cars, boxes, coolers and bags for people to take home.

A line of cars starting from SE Latah Street stretched all the way to Pullman City Hall on Saturday morning. Individuals, some wearing “#PalouseProud” t-shirts, gathered near a semitrailer filled with a mountain of Russet potatoes.

At the start of the line, a man waited with his service dog who was sitting in the passenger seat. He said he got there at 6 a.m. and plans on dehydrating the potatoes to store for later use.

Palouse Brand, a family-owned agriculture company, partnered with a local farmer to give away loads and loads of potatoes to Pullman residents on May 9. A number of Palouse Brand employees, as well as volunteers, helped with the giveaway.

A conveyor belt rested near the edge of the semitrailer. Some volunteers were situated near the belt to place the potatoes into buckets. Others carried the buckets to people’s cars and placed the potatoes in boxes, coolers and even reusable bags.

Palouse Brand Co-Owner Sara Mader said they loaded the truck with 56,000 pounds of potatoes. Prior to the public giveaway, they gave about 5,000 pounds to local restaurants and food banks.

Mader said the Washington State Potato Commission is trying to give away free potatoes for the next couple weeks. This is Palouse Brand’s first potato giveaway and the next will be dependent on other factors.

“Our goal is, as the communities need to shed off onions [and] potatoes — whatever we can do to feed our community, we’re gonna do it,” Mader said.

Kaylee Hammerich, a member of Whitman County Fire District #12, said people can send thank-you cards to the farmer who donated the potatoes.

“People don’t realize not all [the farmer’s] food goes to grocery stores,” Hammerich said. “A lot of it goes to restaurants and even with takeout and whatnot. The restaurants’ capacity is a lot lower.”

The article has been updated to correct Kaylee Hammerich’s last quote.