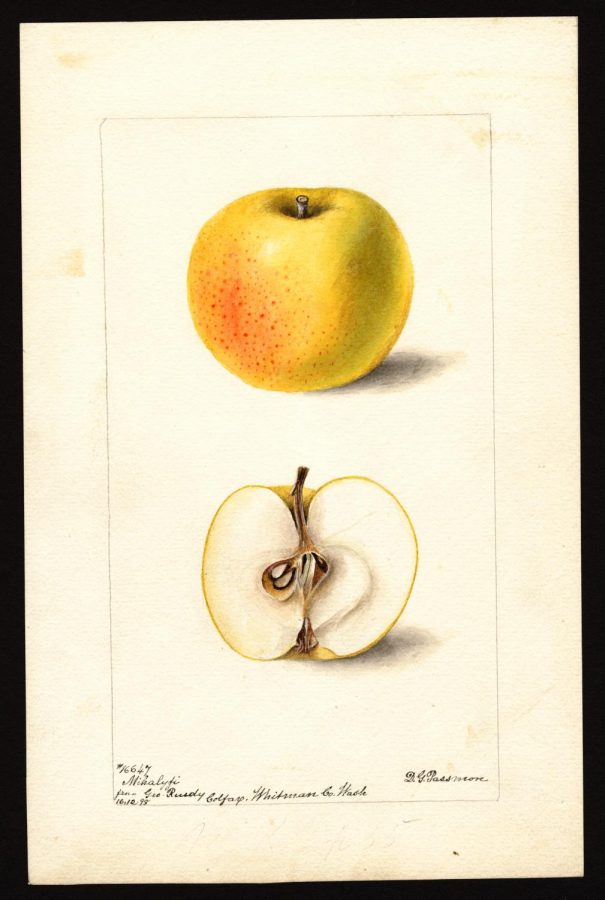 David Benscoter, founder of the Lost Apple Project, said the Mihalyfi was one of 20 Hungarian apple varieties brought to the then Washington State Agricultural College in the late 1800s.

Roy Druffel, a farmer who owns land on Rocky Butte, is a committee member of the Lost Apple Project and discovered the Mihalyfi apple. Project founder David Benscoter said it is one of 23 apple varieties that have been discovered in eastern Washington and northern Idaho.

He said similar ravines have been found all over the Palouse and are undisturbed by farming equipment because of how steep the ravines are.

“For forever, basically, they were never able to be farmed by anyone,” Benscoter said. “[Instead] they would plant fruit trees … that’s where the Mihalyfi comes in.”

The Mihalyfi is a yellow, medium-sized apple with a red blush that originates from Hungary, Benscoter said. It was one of 20 Hungarian apple varieties brought to the then Washington State Agricultural College in the late 1800s. The goal was to test the apples to see if they could grow in Eastern Washington.

Testing apples to determine what variety they are is extremely difficult, Benscoter said. The organization has two apple identification experts, Joanie Cooper and Shaun Shepherd.

“If it weren’t for them, we couldn’t do any of this,” Benscoter said. “To my knowledge, there are only five people in the United States who can do it.”

Shepherd, from Portland, Oregon, said he spends over 100 hours every year looking at apples sent to him by the Lost Apples Project.

“It’s amazing that there’s the variety of apples all over the place,” Shepherd said. “There might be 15,000 varieties of apples … Offhand, I think I know about 200 that I can just look at [and identify]. I recognize apples as if they are people’s faces.”

Shepard said he uses a spreadsheet to categorize apples that look similar to one another. Then he matches their physical traits with descriptions from literature about historical apple varieties or photographs of known and unknown samples he has taken.

“All of this is very time-consuming,” he said. “There are apples that have taken me years to figure out.”

Sometimes, he cannot name a sample, or he gets lucky as he and Cooper did with the Saxon Priest apple, he said. In 2017, they had a box of unidentified samples and Cooper was looking at a watercolored image of a Saxon Priest, which happened to look exactly like their samples, he said.

“That kind of thing happens with regularity,” Shepherd said.

He said he enjoys the challenge of identifying apples and their beauty.

“Look at them the same ways you might look at a flower,” Shepherd said.

He said his favorite apple is the Baldwin apple, which was the Red Delicious of its era, being the most common apple from about 1850-1920.

The Lost Apples Project was founded in 2013, Benscoter said. It partnered with the Whitman County Historical Society in 2016, according to the society’s website.