The Daily Evergreen • May 20, 2020 • https://dailyevergreen.com/79345/opinion/opinion-satire-protestors-politicians-respond-to-covid-19/

Both sides of the issue are equally unhinged, but in different ways 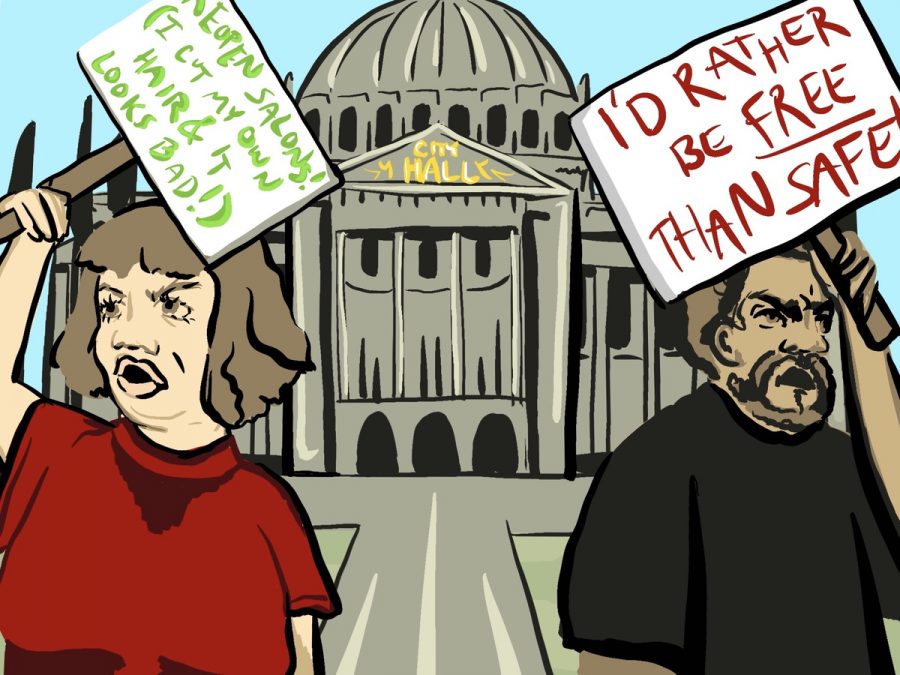 Protestors and politicians alike are both, in their own way, reacting poorly to this pandemic.

As states continue to deal with the coronavirus pandemic, tensions around the country flare as people demand the reopening of businesses and services. Protesters in Michigan, Washington and other hard-hit states see this as an infringement of their constitutional rights, while harried government officials try to negotiate deals that will serve everybody’s common interests.

Smelling a great scoop — in the same way that a bloodhound can smell a rotting corpse from miles away — I decided to do a little investigative journalism of my own. Protesters and state officials alike agreed to speak with me and gave me an inside look into the conflict brewing around this virus.

What I found was much like walking into a Milwaukee Starbucks: it’s inexplicably sticky, everyone there is seething with barely contained rage and you live in constant fear of getting knifed in the back.

“Give me a goddamn haircut, you commie f-ck,” said Rachel Barbarella, a housewife from Grand Rapids, mistaking me for a hairdresser. “I gotta get this bob lookin’ razor TIGHT, you get me? These bangs need to be able to cut glass, understand?”

This is one of the major gripes of the repressed middle class, who feel that by being denied services, they can compare their situation to peasants in Stalin’s Holodomor. While I have the utmost sympathy for any mother wearing a “Keaton Family Vacation Disney 2012” sweatshirt who simply NEEDS that soy latte, I feel the plight of America’s unwashed masses may be a tad exaggerated.

“It’s my constitutionational- constituent- costcotutional right to assemble carrying an anti-tank rifle I brought back from the war,” said Bill Kilgore, a protestor from Gary, Indiana.

Kilgore gained national infamy after a photo of him carrying a North Vietnamese Dragunov SVD sniper rifle into a Jack in the Box went viral, gaining him the moniker “Super-Size My Lai.”

“Man, if I can’t carry the Hand of God — that’s what I call my gun here — into a restaurant, then we might as well be Communist China, for all I care,” Kilgore said.

But it’s important to see the other side of the issue as well, so I spoke to Washington Gov. Gary Callahan, to see what he thought about the protests going on all around the country.

“The people, you understand, are like a great beast,” Callahan said, licking his inexplicably oily teeth. “They must be subjugated, if we are to meet their needs. Like a concerned and gentle lover, I surround my voters in a gentle clasp, so as to lull them into complacency and thus, to civility.”

By this point, Callahan had somehow opened a large jar of coconut oil and was basting my face in it, muttering “flesh, flesh, how I love the flesh,” under his breath. I managed to extricate myself and continue the interview, but Callahan continued to stare at my calves (I was wearing cargo shorts) and sharpen a large butcher knife.

“Yes, of course this virus is a horrible misfortune, and my government is doing the best it can to mitigate the effects,” Callahan said. “For example, we’ve set all the local Boy Scout troops to sewing body bags, and the Girl Scouts are converting from a cookie-forward operation to something we like to call ‘blood-harvesting.’ It’s all part of our plan to get the state of Washington back to work, whether it’s in one of our new cyber-armor factories or as a radioactive gene-meat harvester! There’s something for everyone.”

As I finished the interview, I couldn’t help but feel a little downtrodden, like my feet were filled with lead. Callahan had gnawed off part of my ankle tendon, but that wasn’t the main cause. Rather, it was an impending sense of governmental doom that seemed to permeate every aspect of the people I spoke to.

Friends and readers, we live in confusing and strange times. To quote Hunter S. Thompson, “There’s no such thing as paranoia. It’s all true.” To further quote Bob Dylan, “The times, they are a-changin.”

In a world where political leaders speak comforting lies out of one side of their mouths and spit the chewed bones of infants out of the other, it can be hard for the average reader to know where they stand.

My advice? Nobody in this great debate is right. The politicians are aching to extend the Patriot Act, and the protesters would die for a spoonful of marshmallow fluff, even if it were laced with coronavirus. Everyone everywhere is wrong about everything, except for me.

In the words of Ennio Morricone, “keep your hand on your gun,” dear readers, for the world of 2020 is looking dangerous.