Keepers of the campus; Facilities Operations 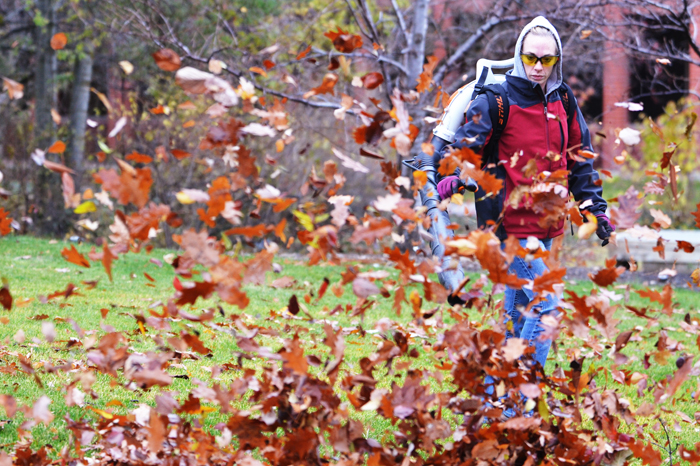 Fall strikes and thousands of leaves flutter across the WSU Pullman campus.

Then, winter brings sub-freezing temperatures that crack concrete and form a hazardous layer of ice over walkways as students trudge their way to class.

The group responsible for managing these issues is WSU Facilities Operations (Fac Ops), a group of gardeners, technicians and machinery operators who strive daily to maintain the campus.

“The scope of what they do is huge,” said Dennis Rovetto, director of Plant Services.

This department within Fac Ops is responsible for all of the pedestrian areas on campus, including 26 acres of playfields, 30 miles of sidewalks and other high-traffic areas like the Glenn Terrell Mall.

“We do the best we can to try to keep these areas open and clean,” said Kappy Brun, who supervises the grounds and nursery crews.

Brun began working for Fac Ops 30 years ago as a gardener. Although she is now a supervisor, Brun works alongside her crew on major tasks like leaf pick-up, which she said can take up to two months.

The task involves several pieces of machinery. First, workers use a mulching mower to shred leaves into small pieces that quickly decompose into the soil. When the leaves begin to fall more quickly, they clear large areas using a truck-mounted vacuum and walk-behind leaf blowers.

“More in the industry, they’re getting to be more conscientious about keeping it quiet and not so disruptive,” she said.

Rovetto said each of the gardeners working for Fac Ops services approximately 60 to 80 acres of campus.

“That’s almost double of anyone else in the country,” he said, noting that most universities have relatively larger maintenance staffs.

The grounds crew consists of only 14 workers, including Brun. An additional three are hired each winter to assist with snow removal.

They also respond to about 48,000 service calls each year, which include a variety of tasks from cleaning and heavy lifting to carpentry and systems maintenance.

Rovetto remarked at the speed with which Fac Ops workers respond to incidents like overflowing sewer drains.

“We usually can stop it before it can spread one or two feet out onto the sidewalk,” he said. “You can’t imagine how fast you have to be in order to do that.”

Other tasks undertaken by Fac Ops include pruning all of the trees and bushes on campus and a concrete crack-sealing program, which lasts several weeks every spring.

Rovetto applauded the grounds crew for the tasks it performs on a daily basis.

“I’m just very proud of them because I think this is one of the prettiest campuses in the country,” he said.