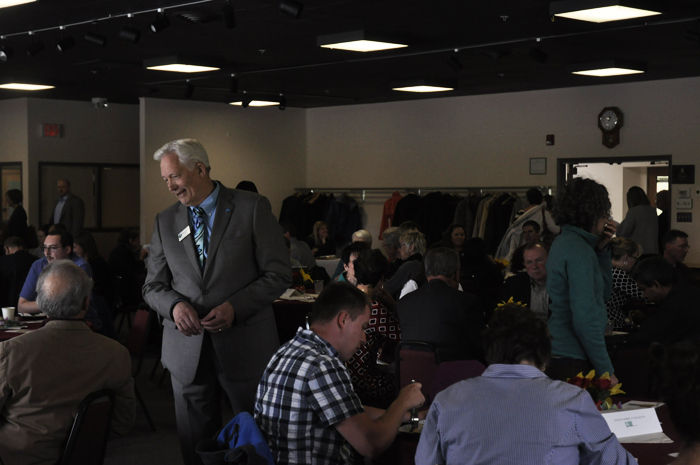 Pullman Mayor Glenn Johnson and other city leaders presented the annual State of the City address Tuesday at the Gladish Community Center.

He said the city is setting aside $2.5 million for the project, and Moscow is doing the same. Schweitzer Engineering Laboratories (SEL) and its founder, Edmund Schweitzer, have each donated $1 million.

Johnson said bids will open up next week to move soil from around the area to the airport.

The soil will be used to adjust the airport’s landing strip to meet Federal Aviation Administration requirements.

Johnson said there are also plans to build a path for a new terminal much farther in the future.

Johnson moved on to upcoming summer projects, such as the Pullman City Playfields.

“We’re finally addressing the path around there,” he said. “Sometimes it takes a while to get things funded.”

Mary’s Park on Johnson Road will receive updates over the summer. The park is intended to be an area for people with disabilities and will include playground equipment. The city has $162,000 set aside for the project.

Johnson also said the city hopes to build a new crosswalk on Grand Avenue near Cougar Country this summer.

Since 2010, Pullman has been the third fastest growing city in Eastern Washington, Dickinson said. WSU, the Pullman School District and SEL are all expanding.

“We’re seeing some significant growth here,” Dickinson said, “and the projections for the future are more of the same.”

He said the city has been working off a comprehensive plan from 1999 and is in the process of updating the old plan.

Dickinson said his department regularly hosts meetings and forums to gauge what residents would like to see in the city.

He provided a list of the top 10 changes residents want for the city. Heading the list are improved neighborhood and housing conditions – particularly on College Hill – and more retail stores, restaurants and other forms of entertainment in the city.

Dickinson announced a public workshop for feedback on these matters will take place at 6:30 p.m. May 5 in the Senior Lounge at City Hall.

He said the overall expenditures for the budget exceeded its revenue and therefore the city had to dip into reserve funds.

However, Workman said the city dropped the year-end reserves to a little more than 8 percent, significantly less than the council goal of 13 percent.

Workman went through a packet that breaks down the budget of projects as well as budgets allocated to the different city departments.

“The city of Pullman is doing pretty well,” he said, “although there always seem to be struggles to some extent in one area or another.”

For example, Workman said the retail sales tax in Pullman is dependent on construction only – both directly and indirectly.