The Daily Evergreen • May 27, 2020 • https://dailyevergreen.com/79790/news/science-explained-why-is-hand-washing-more-effective-than-using-hand-sanitizer/ 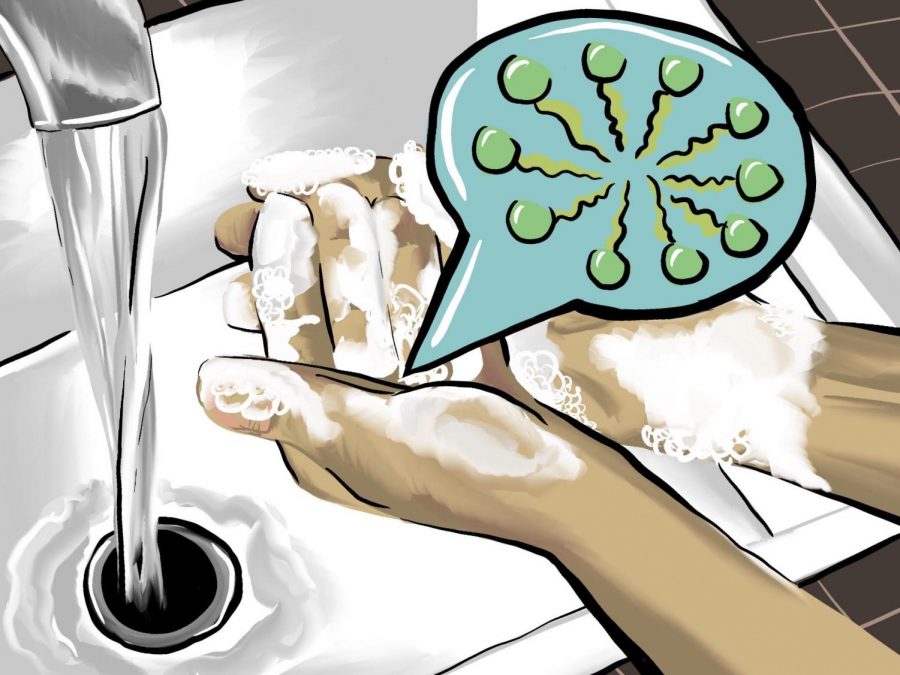 Health officials recommend frequent hand washing as one of the best ways to prevent the spread of COVID-19 — but what is it about hand washing that makes it so effective when compared to other sanitation methods?

The answer comes down to the chemical structure of soap.

Soap molecules have two distinct parts. One is a hydrophilic (“water loving”) head and the other is a lipophilic (“oil-loving”) tail, said Rob Ronald, WSU professor emeritus of chemistry. The lipophilic parts are also called hydrophobic (“water-fearing”) because they don’t mix well with water.

When soap is combined with water, microscopic ball-like structures called micelles form, Ronald said. In the balls, the hydrophilic heads of soap molecules are oriented toward the outside of the ball, where the water is. And the lipophilic tails are on the inside, away from the water.

Because the inside of a micelle is “oil-loving,” it can trap oil or other substances that do not dissolve in water alone. Then, the micelles can be washed away in water. Ronald said the two-step process of soap, where contaminants are first trapped in a micelle and then washed away in water, makes it a very effective decontaminant.

Viruses, like the SARS-CoV-2 strain that causes COVID-19, have protein coatings, which include the spikes that give coronaviruses their identifiable appearance. Ronald said proteins are made of molecular building blocks called amino acids, and a protein must have the correct order of amino acids to have the correct structure and function.

“What gives proteins their specificity … is the way they’re folded,” Ronald said. “Soap disrupts the protein and it is going to disrupt the viral structure as well.”

Ronald said amino acids have both hydrophilic and lipophilic parts and the lipophilic parts will generally fold to the inside of a protein. However, interactions with soap can cause the protein to unfold.

When a protein is unfolded, it is said to be “denatured,” meaning it loses its function, Ronald said. Soap works to destroy viruses by denaturing the viral proteins and then encapsulating them in micelles that can be washed away.

“Hand sanitizers work, and for a lot of things they’re really convenient,” Ronald said. “But they work differently … they’re all dependent on a high concentration of alcohol.”

Hand sanitizer is usually made of either ethyl alcohol or isopropyl alcohol, which has different chemical properties than soap, he said. Alcohol is typically mixed with a thickening substance such as aloe vera gel so it doesn’t run off the hands.

Hand sanitizer must contain at least 60 percent alcohol in order to be effective, according to the Centers for Disease Control and Prevention.

Using alcohol-based hand sanitizer denatures viruses so they are no longer active, but the parts remain on sanitized hands, Ronald said.

When using alcohol-based sanitizer, it is important to leave it on until it evaporates, to not wipe it off early, and to use a large enough volume of the liquid, Ronald said.

When it comes to soap, Ronald said to use enough soap to work up a lather. The soap needs to form as many micelles as possible and still have some leftover to make suds.

Hand sanitizer is convenient, but should not be used as a replacement for soap and water when they are available, Ronald said.

Science Explained is an article series that aims to describe popular science topics without technical jargon that can be confusing for non-science audiences. Each article will cite professors, researchers or experts at WSU, as well as available online research to explain science in a way that is understandable and interesting.

Emma Ledbetter is the author of Science Explained. She is a microbiology major and is going into her fifth semester working at The Daily Evergreen.