‘We won’t have that in our community’ 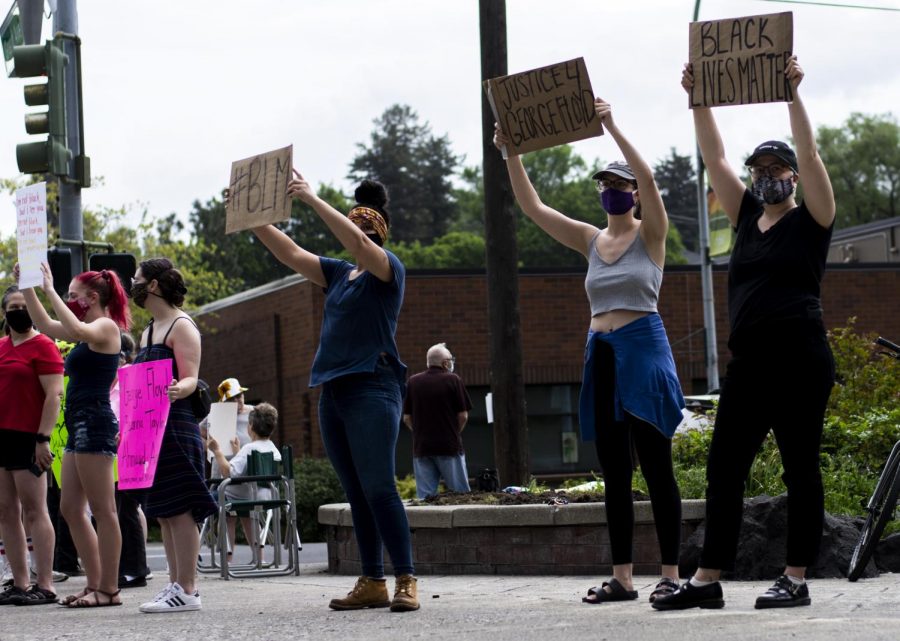 Pouring rain and strikes of lightning did not deter protesters from Cougar Plaza during an anti-police-violence demonstration organized by local activists Saturday evening.

Several Pullman residents across all age groups appeared on the sidewalk of Cougar Plaza for the demonstration. Signs, dampened by the rain, had messages such as “I CAN’T BREATHE” and “INJUSTICE 4 ONE = INJUSTICE 4 ALL.”

“I have friends that are Black, and I’m tired of seeing things that could happen to them just for going out in public,” Robles said. “It’s horrifying that this is America.”

Debbie McNeil, chair of Whitman County Democrats and the demonstration’s primary organizer, said she hopes holding the protest on a busy Saturday would make people think about issues that make them uncomfortable.

“I couldn’t let other people go by on a weekend not thinking about this,” McNeil said.

Local volunteer Sue Hinz said she came to support the movement to protest hatred and racial injustice. Minorities, specifically including Black communities, have faced centuries of oppression, she said.

Pullman Police do their jobs well, McNeil said. She said she hopes to see continued transparency from police when an officer fails to handle a situation correctly.

“People are mad about the looting, but there’s a reason for that,” Rollins said, and that is because U.S. institutions do not acknowledge racial inequality.

Robles said non-Black and privileged groups can ally themselves with people of color by acknowledging their struggle.

Institutions should help by connecting with local leaders of underrepresented groups, listening to them and implementing solutions to these problems, McNeil said.

Nancy, an attendee who did not give her last name because of possible family conflict, said she felt enraged by Floyd’s unjust death. She said she felt disappointed in some of the looting that occurred at other national protests because it “hurts their cause.” She supports peaceful protests and encourages protesters to keep demonstrations peaceful no matter what, she said.

McNeil said she will be working with Pullman City Councilmember Dan Records to examine policies to make sure they reflect equity and diversity. She said she hopes to visit with the county commissioners and work her way through the Washington State Legislature to see what changes can be made at a state level.

“This isn’t over just because we’re done tonight,” McNeil said.