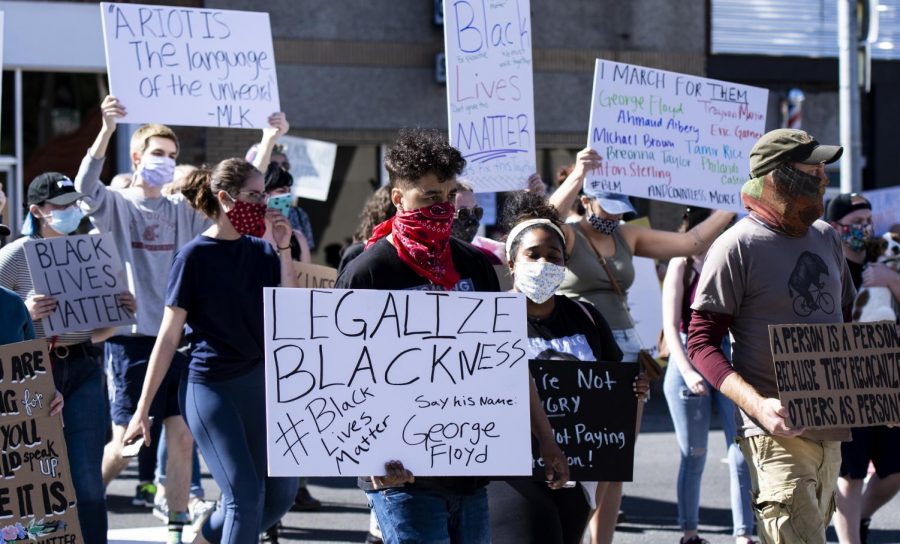 Community members met Sunday evening at the Gladish Community & Cultural Center to protest the death of George Floyd, a 46-year-old man who was killed by police officers in Minneapolis.

A demonstrator waved a pole with the American flag hung upside-down. People waved posters that read “I can’t breathe” and “A riot is the language of the unheard” in the air. About 100 demonstrators marched through downtown Pullman on Sunday in solidarity with the Black Lives Matter movement.

KT Turner, graduate student at University of Idaho, said she was raised close to New Orleans. She said she lived close to city government, so most police officers knew her and she never felt unsafe while there.

She said she is fortunate to not have had any encounters with police officers.

“I’m very, very careful to not let that happen because I don’t want to test it,” Turner said.

When people look at her, she said they see a Black body. They do not see her intelligence, her creativity or her drive to educate.

Turner said she is tired of the injustice shown to people who look like her.

“I want to be able to live in a country where I can feel safe,” she said. “Where I can feel like I can raise my children and they’ll be safe and happy, and don’t have to worry about jogging, or playing with nerf guns or just being alive.”

Samantha Fulgham, organizer of the march and Pullman resident, said she acknowledges the fact that Pullman is a small community in a rural and conservative part of Washington. She said she wanted to host the march to create a safe space for people of color.

She said she would love to see a collaboration between Pullman and Moscow to show more community support. Black Lives Matter, to her, is an important movement that brings light and attention to issues that people like herself do not face, she said.

“I have so much privilege being a white, well-educated woman in a community like this,” Fulgham said. “Black Lives Matter is just an incredible way to show our support to those communities.”

She said she encourages people to voice their opinions and support movements, even if it does not personally affect them.

“Not being vocal and not being present in a demonstration like this shows that people have a lot of privilege and are okay with how comfortable they are in a society like this,” Fulgham said.

For those who are uncomfortable voicing their opinions from fear of receiving backlash, she said there are other ways they can still show support.

“I would encourage everybody to get out of their comfort zone. This is not comfortable for me, but this is what needs to happen,” Fulgham said. “We can’t just ignore a huge community in this town and make them feel like they’re alone and not actively show support [for] them.”

Despite being a person of color, demonstrator Jose Amarillas said he will never know what it is like to be a Black person in America.

Amarillas said he advocated for immigration reform and DACA in the past, but watching the video depicting George Floyd, a 46-year-old man who died in Minneapolis from police conduct, hurt and motivated him to take part in the demonstration.

He said he grew up in a majority-Hispanic town in Washington and has witnessed his father being mistreated by police officers.

Demonstrator Rebecca Metzler said she and Amarillas were coming out of a bar once when they saw a Black woman struggling with police officers. She said Amarillas attempted to get between them while saying “Hey, she’s not doing anything.”

“They didn’t care to listen, so they just arrested [Amarillas] on the spot with no reasoning,” Metzler said.

She said people of color become accustomed to small acts of racism, but refuse to react or feel when such things occur.

She said this need to feel like a “bigger person” does not mean that suppression of feelings is necessary.

“Being the bigger person means you stand up and you do something and say something even if it creates discomfort,” Metzler said.

She said seeing similar demonstrations take place across the country encouraged her to attend. This is because it is comforting to know that other people are fighting alongside her even if they are in a different city.

Metzler said her religion also inspired her actions, as she wants to fight for a world where people are respected.

“I’m a Christian, and I believe God created the world to look like him, and I don’t think this is it,” she said. “I want to fight for those people to live in a world that looks more like him.”

Volunteers from Food not Bombs of the Palouse provided food such as cinnamon rolls and peanut butter sandwiches to demonstrators.

Volunteer Tasia North said her priority is making sure the demonstrators have food and water. Volunteer Andy Jacobs said serving food is his way to show solidarity.

Savannah Doty, Pullman High School senior, said it is unfortunate to see this level of injustice at this point in time.

Desiree Gould, elementary school teacher, said she was on her way back from a camping trip when she heard about the demonstration.

“I don’t want to stay home and watch the world burn. I have to do something,” she said. “All lives don’t matter until Black lives matter.”

“If you don’t do your duty as an ally, and you stay silent — you are part of the problem,”  Laprade said.

Although it may be polarizing to stand out, she said people must understand the ramifications of ignoring human rights and human life.

“Silence makes you complicit and you cannot commandeer a protest that is not about you,” Laprade said.

“People really need to read and learn about what is going on in the country they are living in,” he said. “I think people need to hear it, need to see the videos, need to see the reality of what it is and not be shy of it.”

Turner said discussing racial injustice on social media is exhausting, but it ensures a conversation is being had. It also helps the public hold law enforcement officers accountable. Similar to how doctors can lose their license, if an officer cannot do their job, then they should no longer be officers.

“The simple fact that my sign has to say ‘My life matters’ is a big deal,” she said. “I shouldn’t have to put it on a sign for people to know that I’m worthy of life, and I’m worthy of love.”

Demonstrator Corrina Washington said she is angry and it is hard to be a person of color while seeing what is happening.

“There’s a lot that I’m feeling,” Washington said. “It’s hard for me to form words.”

She said Black people have expressed their struggle and the things they have been through for years. She appreciates people who are not Black, but are speaking up and wanting to make a difference.