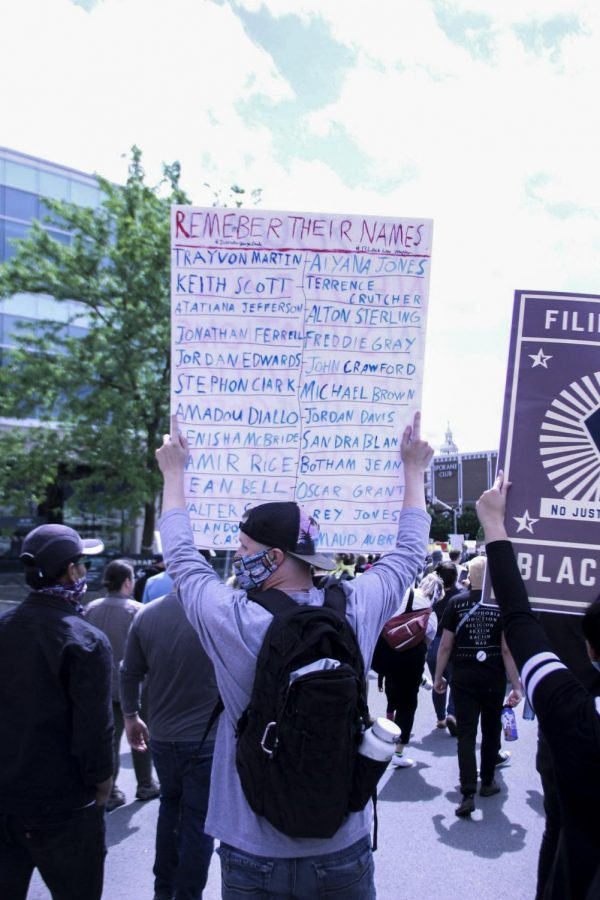 A protester holds a sign with the names of Black victims of police violence.

I was one of about 3,500 protesters who walked from Riverfront Park to the Spokane County Courthouse in an organized protest Sunday. The march that started at 2 p.m. was peaceful. It involved many people with amazing signs and chants, most notably being, “No justice, no peace, no racist, police.”

Almost every person had a sign that called out the injustice they were protesting. The ones that had the most impact on me were the ones that listed the names of the most well-known Black people who have been murdered by police officers, with so many that most don’t even know about. Their names mean something and they will not be forgotten.

Every time there was even a speck of something close to violence, they stopped it immediately. Community organizers wanted this protest to be meaningful in numbers, not in destruction. Though it is not my place, or any white person’s place, to condemn any destruction done to communities, or to make judgments about the way Black people protest the centuries of oppression their community has experienced.

I witnessed and participated in group prayers, knelt with officers who I thought at the time saw what the protest was trying to do, and eventually marched back to Riverfront Park. At the time, I thought they actually cared, that they wanted to be there with us, they were starting to see it, to understand. It wasn’t until later that I would realize none of that kneeling mattered.

After the walk back from the county courthouse protest, organizers continued the work they had started earlier in the day until there was a split from the original protest. This split of protesters continued to make loops through downtown Spokane peacefully, with joy as cars honked their horns in support as police stood on the sidelines. This ended with a group of protesters in front of the city courthouse.

At the courthouse, I realized the shift in the people surrounding me and the friend I was with. This group was younger, but they were still peaceful and had a lot to say. They just wanted the protest to continue. Everyone still at the protest wanted to be with like-minded people who felt like they needed to do something and this is the only thing they actually can do.

Outside of the city courthouse, I witnessed the first act of violence I had seen all day. A car trying to get through sped into two protesters and carried them about half a block. Luckily the car wasn’t going fast enough to hurt them seriously, but it still drove off without being held accountable for the violent act they committed against peaceful protesters.

The protest continued on. At that point in time, I thought it was over. We had shown up, we had marched, and I thought it was the end of the day. I was so, so wrong. About an hour after the car ran into protesters, a small group of protesters not within the main march broke into the Nike store in downtown Spokane. I was about a block away when it happened. What I saw when I got there was the main protesters of the march rushing to stop the looting, but not in time for some of the looters to take merchandise from the store. Protesters linked arms to keep the looting from continuing. They knew it had to stop. As they had done earlier in the day, protesters deescalated a situation.

Though this wasn’t the end. About five minutes after the glass door of Nike was shattered, multiple armored trucks surrounded the area. We had seen them earlier in the day and mostly commented on how they were unneeded and how crazy it was for there to be such a militarized police presence in eastern Washington.

This part of the story is what the mayor of Spokane and multiple news outlets are currently getting wrong. Breaking into the Nike store and the other looting in downtown Spokane are completely separate. They happened hours apart from each other. In between is an escalation of the situation brought on by a police force that tear-gassed peaceful protesters and then proceeded to shoot rubber bullets into crowds.

Outside of the Nike store, original protesters had no idea what to make of the armored trucks that showed up on the scene. For me, it was even terrifying to see security guards with automatic weapons. I don’t know much about guns but why does a Nike security guard have to carry a gun that looks like it belongs in a war zone? It continually reminds me that these “good guys with guns” are not good. They would rather shoot me and other protesters than just let someone get away with stealing a shirt from Nike.

There was one message that came across a megaphone in the distance, “Clear the area or you will be arrested.” I thought to myself that they would probably end up arresting me that night and for a 23-year-old white woman who has never even received a speeding ticket, I only hoped my privilege would keep me from being mistreated. However, no one seemed to be leaving, they simply continued their peaceful protest.

Then the police decided the only way to clear the area was with tear gas that they launched into a peaceful crowd without warning. If anyone during these protests says tear gas and rubber bullets are nonviolent ways to get crowds to disperse and get protesters to comply with authority, they are completely wrong. The most violent thing that happened to me Sunday was the tear gas bombs that made it impossible to breathe or see.

Police say they launched tear gas into the crowd because a water bottle had been thrown at them. Is that violent? I mean, maybe if it was a white girl’s hydro flask, but I doubt anyone would want to waste $50 on a police officer. Even if it was, it’s still not enough to tear gas an entire crowd.

Over the next 30 minutes, the police force fired at least five different rounds of tear gas bombs into a peaceful protest that ended up being pushed into Riverfront Park. Even if someone wasn’t a part of the protest, they got tear-gassed just like the rest of us. It was getting close to the print deadline for the local paper and the friend I protested with was now writing a story. We left before the rubber bullets were shot into the crowd of about nine protesters at that point.

After we left, the situation downtown started to escalate, but I don’t believe it was the protesters who did it. It was the armored trucks that shot rubber bullets and tear gas into crowds of unarmed young men of color on their knees asking them not to shoot. None of these men were the ones who would later loot downtown Spokane, none of them are the reason the situation escalated, but they are getting blamed for what happened.

The last thing I heard from the megaphone before I left was “With your fists raised, you are not protesting, you are rioting.” The raised fist, the most iconic symbol of Black power, the fist that had been held up by protesters all day, was being seen by police as a symbol of rioting. Then I guess every protest is a riot. I guess I’m a rioter.

The column has been updated to clarify what happened at the Nike store.